____ 1. I try to encourage healthy eating by making healthy meals for my family.

____ 2. Isabel joined the club and participated in its activities.

____ 3. It is improper for a teacher to accept a gift from students.

____ 4. Rigo associates the smell of cinnamon with the fall season.

____ 6. Can you help your teacher distribute these flyers to your classmates? Can you give one for every student?

____ 7. Soccer unified the country. Everyone came together as fans regardless of their background.

Take notes while you read. Then write a summary of the passage.

Rosie the Riveter by Barrett Smith

While many people do not know who Rosie the Riveter truly was, her image continues to inspire women today. In this informational text, Barrett Smith discusses the beginning of Rosie and how she impacted women during World War II. As you read, take notes on why the image of Rosie the Riveter was created, and how it inspired women during World War II.

1Rosie the Riveter is not an actual person but an idea that represents an era in history and the women who were part of that era. A riveter is someone who uses a rivet gun to attach metal parts, but not all Rosie the Riveters were actual riveters. Rosie the Riveter is an idea that represents all of the American women who worked in factories, shipyards, and other manufacturing plants during World War II to help the American war effort. She has also come to represent women’s economic power and feminism, which is the movement that fights for the equal rights of women.

Women in the Workforce

2Before World War II, most married women were housewives and stay-at-home moms. This meant that they were dependent on their husbands for money, food, and other resources. The few women who went to work tended to be of lower class backgrounds and held domestic-type jobs that people considered “appropriate” for women, such as cleaning and clerk work with low pay. Many women lost their jobs during the Great Depression or gave them up to create opportunities for more men to work.

3When the United States entered World War II after the bombing of Pearl Harbor, most American men were conscripted to fight in the military. This left no one to work in the factories and shipyards but they were still needed to produce weapons and supplies for the war effort. Companies and the American government started recruiting women to fill the jobs that in the past had been seen as only for men.

4The Rosie the Riveter image and idea were used during the war by companies and the American government to encourage housewives to join the workforce. It was considered improper, at the time, for high class women to work so Rosie the Riveter was made to show a feminine woman who only works because her country needs her.

The Story Behind the Name

5The term “Rosie the Riveter” was first used in a 1942 song written by Redd Evans and John Jacob Loeb. The song describes Rosie as a worker on an assembly line, working hard even while other women were out at the bar. Rosie earns an award for her hard work and dedication to the American war effort. Rosie the Riveter isn’t a real person but the writers of the Rosie the Riveter song were inspired by a real woman — Rosalind P. Walters, a rich woman who worked in a factory building a fighter plane called the F4U Corsair Fighter. This song became a hit and the term “Rosie the Riveter” became known across the United States.

The Story Behind the Image

6The iconic image that most people associate with Rosie the Riveter today is the “We Can Do It” poster created by J. Howard Miller in 1942. In this poster, a woman in a red bandanna is rolling up her sleeve with the slogan “We Can Do It!” above her. However, this poster was not actually very well known during World War II, and it was not used to recruit women to work. The “We Can Do It” poster was produced by Westinghouse Company's War Production Coordinating Committee and put up inside their factories to motivate both male and female employees to work harder. It wasn’t until after the war, in the 1980s, that the poster was rediscovered and became associated with the feminist movement.

7In 1943, the famous visual artist Norman Rockwell created an image of Rosie the Riveter that was used as the cover of Saturday Evening Post. This image was widely distributed and very popular, and it was used during the war for war bond drives. In this image, a woman is holding a rivet gun and a lunch box that says “Rosie” on it. It is believed that Rockwell was inspired by the Rosie the Riveter song when creating this image. 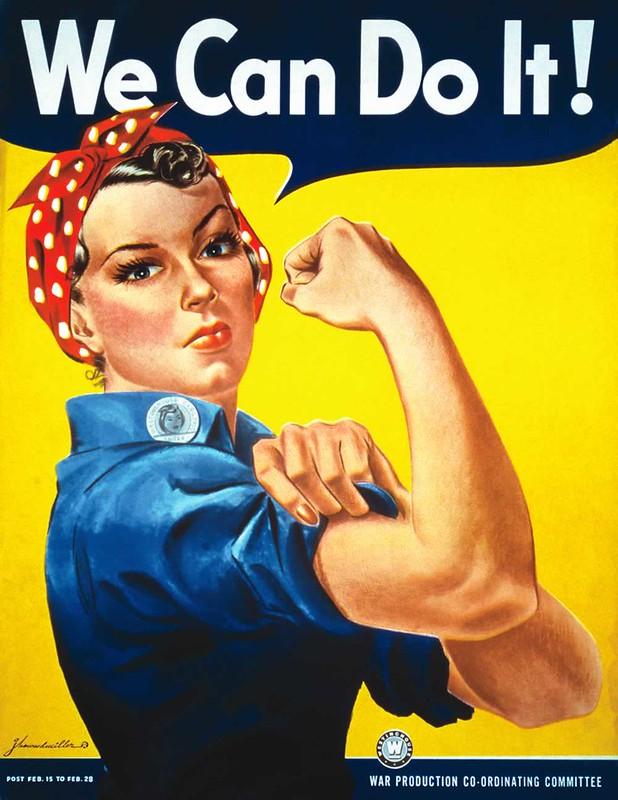 8Many Americans consider the Rosie the Riveter era as a time when all Americans came together to help the war movement. However, this isn’t entirely true. While the war gave many white women the opportunity to work, it wasn’t until 1943 that black men started to be hired and not until 1945 that black women started to be trained as welders. This eventual integration, however, did have a lasting impact on the civil rights movement as well as the feminist movement. White and black people worked alongside each other doing the same jobs and had to learn to negotiate that sudden integration (in a time when they still did not share the same water fountains, toilets, or public schools)

“Rosie the Riveter” by Barrett Smith is licensed by CommonLit under CC BY-NC-SA 2.0

1. PART A: Which of the following identifies a main idea in the text?

A. Rosie’s image and what she stood for inspired women to take on jobs formerly reserved for men.

B. The image of Rosie was responsible for dividing the nation more than unifying it because black men and black women still faced many restrictions.

C. Rosie’s powerful image is the sole reason that black and white women felt that it was acceptable to enter the workforce.

D. The image and ideas behind Rosie were originally intended to convince women to spend money on war bonds.

A. “The Rosie the Riveter image and idea were used during the war by companies and the American government to encourage housewives to join the workforce.” (Paragraph 4)

B. “This image was widely distributed and very popular and it was used during the war for war bond drives. In this image, a woman is holding a rivet gun and a lunch box that says ‘Rosie’ on it.” (Paragraph 7)

D. “The economic empowerment of the Rosie the Riveter era and the opening up of jobs to women and black people were temporary — when the war ended, men returned to their jobs, and many women returned to being housewives.” (Paragraph 9)

3. PART A: Which of the following describes how the author introduces Rosie the Riveter in the text?

A. The author provides information on the person who inspired Rosie.

B. The author outlines the ideas that Rosie stands for.

C. The author describes what Rosie physically looks like.

D. The author emphasizes the lasting effects Rosie has had on women.

4. PART B: Which quote from the text best supports the answer to Part A?

A. “A riveter is someone who uses a rivet gun to attach metal parts, but not all Rosie the Riveters were actual riveters.” (Paragraph 1)

B. “She has also come to represent women’s economic power and feminism, which is the movement that fights for the equal rights of women.” (Paragraph 1)

C. “Companies and the American government started recruiting women to fill the jobs that in the past had been seen as only for men.” (Paragraph 3)

D. “The Rosie the Riveter image and idea were used during the war by companies and the American government to encourage housewives to join the workforce.” (Paragraph 4)

Reading and Writing Skill-Responding to Texts

In addition to a summary, instructors may ask you to write a response to a reading. The summary should be first, and the response paragraphs should follow. There are three strategies to use when writing a response.

Although you give your opinion in this strategy, you should refrain from using personal pronouns I/me/my. Do not say “In my opinion.” Instead, you should choose a point made by the author and agree or disagree. You can say something similar to “The authors state…., but this is not true as seen in the example of…”

You can choose a quote or point made by the author and apply the concepts to an event or phenomena that is happening (has happened) in the world. The starter for this strategy might be “The idea [explain the idea] that the authors mention is related to [world event/phenomena].” Then explain how it is related.

Apply a quote or concept in the reading to another text. The starter for this strategy might be “The idea [explain the idea] that the authors mention is related to [state the idea from the other reading] found in the text [title] by [author].” Then explain how it is related.

Choose three quotes or points from the reading and respond to them using the strategies from above.

1. Give three strategies that show how parents can encourage their children to read more.

2. How can the government unify a nation when they are divided on a social issue?