_____ 2. You need to confront your fear of speaking in front of people.

_____ 3. There are diverse classes at Reedley College. For example, you can take art, music,

_____ 5. Immigrants in the Central Valley of California are predominantly from Mexico.

_____ 6. It is common to integrate reading and vocabulary because the two skills support each

_____ 8. Not all countries embrace American culture.

_____ 9. Relationships should be based on trust and honesty.

Compare and contrast the old and new immigrants mentioned in the reading The Rush of Immigrants.

The Rush of Immigrants by USHistory.org

1Immigration is a central part of the American experience. Except for Native Americans, all United States citizens can claim some immigration experience for their ancestors, whether during prosperity or despair, brought by force or by choice. However, immigration to the United States reached its peak from 1880-1920.

2The so-called “Old Immigration” up until the mid 1800s brought thousands of Irish and German people to the New World. But during the New Immigration boom, although those groups would continue to come, even greater ethnic diversity would grace America's populace. Many would come from Southern and Eastern Europe, and some would come from as far away as Asia. New complexions, new languages, and new religions confronted the already diverse American mosaic.

3Most immigrant groups that had formerly come to America by choice seemed distinct, but in fact had many similarities. Most had come from Northern and Western Europe. Most had some experience with representative democracy. With the exception of the Irish, most were Protestant. Many were literate, and some possessed a fair degree of wealth.

4The later groups arriving by the boatload in the Gilded Age were characterized by few of these traits. Their nationalities included Greek, Italian, Polish, Slovak, Serb, Russian, Croat, and others. Until cut off by federal decree, Japanese and Chinese settlers relocated to the American West Coast. None of these groups were predominantly Protestant. 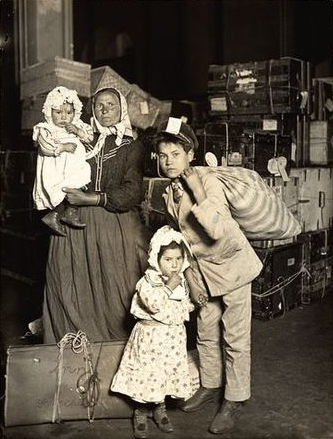 5The vast majority were Roman Catholic or Eastern Orthodox. However, due to increased persecution of Jews in Eastern Europe, many Jewish immigrants sought freedom from torment. Very few newcomers spoke any English, and large numbers were illiterate in their native tongues. None of these groups hailed from democratic regimes. The American form of government was as foreign as its culture.

6The new American cities became the destination of many of the most destitute. Once the trend was established, letters from America from friends and family beckoned new immigrants to ethnic enclaves such as Chinatown, Greektown, or Little Italy. This led to an urban ethnic patchwork, with little integration. Most of the newcomers lived in run-down and overcrowded apartment buildings, called tenements, until they could save enough money for an upward move.

7Despite the horrors of tenement housing and factory work, many agreed that the wages they could earn and the food they could eat surpassed their former realities. Still, as many as 25% of the European immigrants of this time never intended to become American citizens. These so-called “birds of passage” simply earned enough income to send to their families and returned to their former lives.

8Not all Americans welcomed the new immigrants with open arms. While factory owners greeted the rush of cheap labor with zeal, laborers often treated their new competition with hostility. Many religious leaders were awestruck at the increase of non-Protestant believers. Racial purists feared the genetic outcome of the eventual pooling of these new bloods.

9Gradually, these “nativists” lobbied successfully to restrict the flow of immigration. In 1882, Congress passed the Chinese Exclusion Act, barring this ethnic group in its entirety. Twenty-five years later, Japanese immigration was restricted by executive agreement. These two Asian groups were the only ethnicities to be completely excluded from America.

10Criminals, contract workers, the mentally ill, anarchists, and alcoholics were among groups to be gradually barred from entry by Congress. In 1917, Congress required the passing of a literacy test to gain admission. Finally, in 1924, the door was shut to millions by placing an absolute cap on new immigrants based on ethnicity. That cap was based on the United States population of 1890 and was therefore designed to favor the previous immigrant groups

11But millions had already come. During the age when the Statue of Liberty beckoned the world's "huddled masses yearning to breathe free," American diversity mushroomed. Each brought pieces of an old culture and made contributions to a new one. Although many former Europeans swore to their deaths to maintain their old ways of life, their children did not agree. Most enjoyed a higher standard of living than their parents, learned English easily, and sought American lifestyles. At least to that extent, America was a melting pot.

“The Rush of Immigrants” by USHistory.org is licensed under CC BY 4.0.

For the following questions, choose the best answer according to the reading.

1. Which of the following best identifies the central idea of this text?

A. America became more of a melting pot as people embraced their differences from one another and celebrated their heritage.

B. America has struggled with its identity as a melting pot due to cultural differences and anti-immigration policies.

C. America fails to be a melting pot because people who do not learn English cannot integrate with American citizens.

D. America is not a melting pot because many immigrants never considered themselves American, but only wanted to go to America for a time to make money.

2. What does the phrase “melting pot” in paragraph 11 imply about American culture?

A. American culture is formed as white Americans steal facets from other cultures without their consideration.

B. American culture completely destroys differences between cultures until everyone is exactly the same in their daily lifestyles.

C. American culture fears that which is different from it.

3. PART A: Which statement best describes how Americans responded to the arrival of new immigrants, according to the text?

A. Americans rejected the new immigrants because they were so poor and did not contribute to the economy.

B. Americans accepted the new immigrants because they brought new, interesting cultural elements to American culture.

C. Americans accepted some immigrants and rejected others often out of fear of losing jobs to their cheap labor.

D. Americans rejected all immigrants because they felt that they were not contributing to society.

4. PART B: Which phrase from the text best supports your answer to Part A?

A. "While factory owners greeted the rush of cheap labor with zeal, laborers often treated their new competition with hostility.” (Paragraph 8)

B. “Gradually, these 'nativists' lobbied successfully to restrict the flow of immigration.” (Paragraph 9)

C. “These two Asian groups were the only ethnicities to be completely excluded from America.” (Paragraph 9)

D. “Criminals, contract workers, the mentally ill, anarchists, and alcoholics were among groups to be gradually barred from entry by Congress.” (Paragraph 10)

Recall that a paragraph has three major components: a topic sentence (main idea), supporting details (the body), and a concluding sentence. An essay also has three major parts: an introductory paragraph, a body (supporting paragraphs), and a conclusion paragraph. In this unit, you will learn about the parts of an essay in more detail. In Chapter 4, you wrote two paragraphs about immigration. These paragraphs will be the body of your first essay.

The first paragraph of an essay is called the introduction. Typically, instructors want a hook, connecting information, and a thesis statement. The hook is a sentence that attracts the reader’s attention; however, it is important to note that once you have the reader’s attention, you need to try to keep it. The thesis statement is similar to a topic sentence in that it states the main idea of the essay. In this section, we will focus on the first two parts of an introductory paragraph. We will learn about the thesis statement soon.

There are several strategies for the introductory paragraph. More than one strategy can be used.

Definition: Define key concepts that are the focus of the essay.

Funnel: A funnel is like an upside-down triangle. The paragraph begins with a general statement and then the sentences become more and more specific.

Historical Background: Explain the history of the topic. What is the relationship between groups involved? Has there been conflict? This strategy usually involves dates.

Anecdote: Tell a story of someone or something that is related to the topic of your essay. For example, if your essay is about immigration (which it is!), then tell the story of an immigrant.

Look at the three example introductory paragraphs. Identify which strategies are used in each paragraph. More than one strategy per paragraph is possible. Underline the thesis statement.

There is a famous expression in English: "Stop the world, I want to get off!" This expression refers to a feeling of panic, or stress, that makes a person want to stop whatever they are doing, try to relax, and become calm again. 'Stress' means pressure or tension. It is one of the most common causes of health problems in modern life. Too much stress results in physical, emotional, and mental health problems.

looking for a better way of life. Through the years, most of these immigrants get established and

overcome economical hardships. At the same time that these foreign people begin to form their

families in the country where they immigrate, they start to provide to their children who are the

second generation immigrants, better opportunities to live. As immigrants there are some

contrasts between both of these groups, such as economic and educational success, social beliefs,

Which introductory paragraph is your favorite? What features of this paragraph do you like?

Write an introductory paragraph for the two body paragraphs you wrote about in Chapter 4. Your draft does not need to include a thesis statement because we will learn that skill in Chapter 6. Be sure to use one or more of the strategies you learned in this chapter.

1. If a teacher does not accept late homework, are there times that he or she should have exceptions?

2. If you think your classmate was copying you during an exam, would you confront him or her? Why or why not? If so, how?

3. Tell about a time your surpassed someone (e.g., height, weight, ability)?

4. Do parents favor one child over another? Is it possible for parents to treat children equally?