When you're reading like a writer, you're more attuned to the ways that writers create meaning. You're also reading with a spirit of generosity: as a writer yourself, you know how hard writing is, and you will find yourself more forgiving those minor lapses in control in writing. You're also reading with the intention of making the words on the page make sense. You know the writer had something important to say, and you want to do your best to figure it out.

Sometimes sentences are confusing, but rarely does a writer intent to write a confusing sentence. Consider this headline that confused me at Halloween

I was confused by this headline. I was misreading the headline because there were missing words, and I was putting those missing words in the wrong place. I read it as

Halloween treats kids (that) adults will want to eat

When I should have read it as

Halloween treats (that) kids (and) adults will want to eat

So whose error was it? Does it even matter? In the end, I figured out what the headline meant

What is an error?

The most important errors to pay attention to in writing are those that change the meaning. There are a lot of grammar jokes that play on the idea that grammar sometimes changes the meaning. For example,

One of my favorite grammar jokes is this one 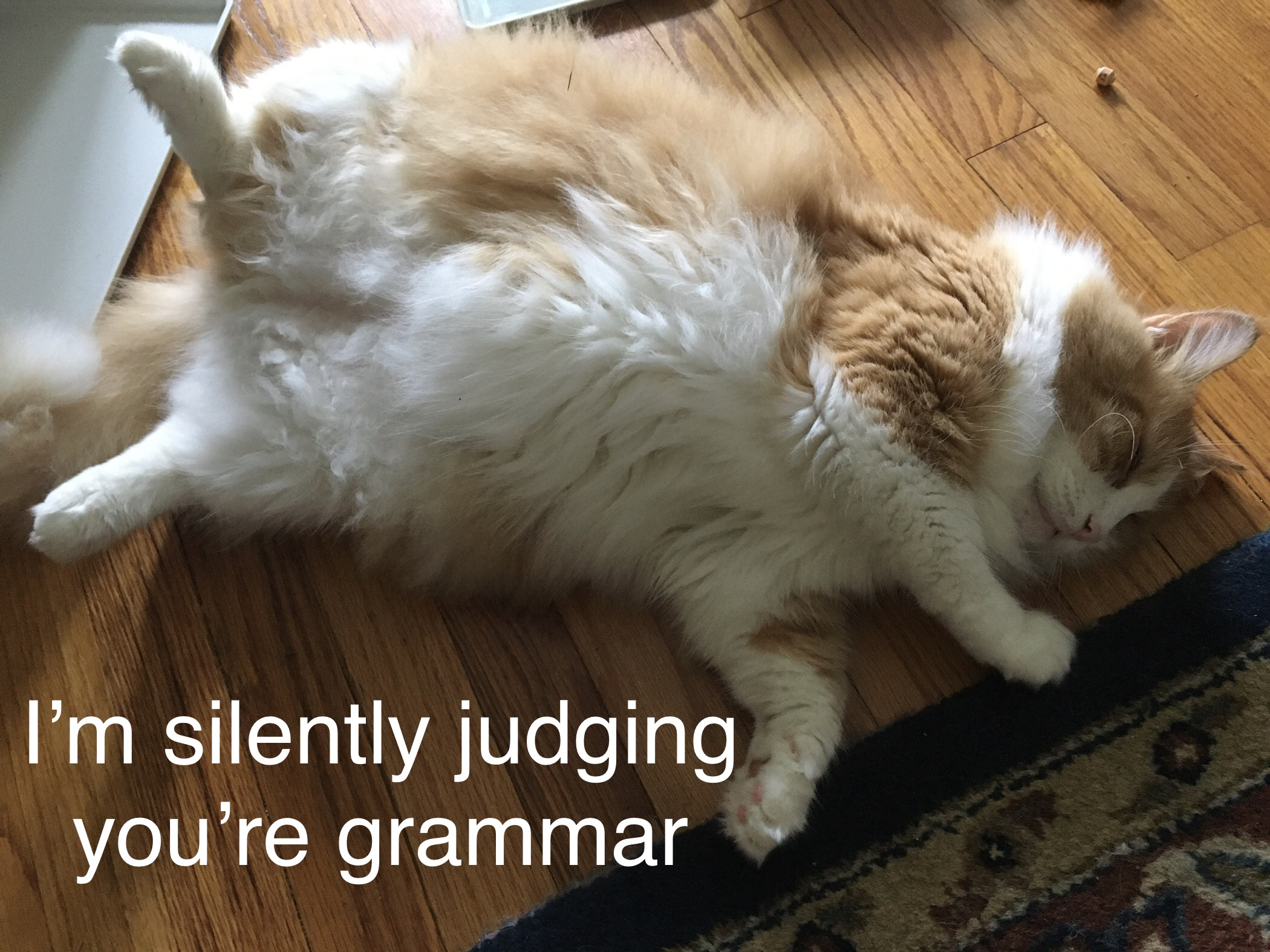 You may have seen a sticker, mug, tshirt or meme with the "correct" version. In this version, the "error" doesn't change the meaning. Instead, it works as a kind of irony. While many people (but not cats) can't help but to judge others' grammar usage, in reality very, very few people know all of the rules and never make mistakes.

Many writing teachers advocate using a editing log to keep track of your "mistakes". These teachers rightly believe that such a practice creates more autonomy and agency in students. This autonomy is key to students finding their authentic voice.

Traditionally, to make an editing log, create four columns. Label each column: Error Example, Name of Error, Explanation, Correction Example. When you are editing your work and find a mistake, jot down the word, sentence, or phrase that is problematic in the first column. Then use your editing resources to figure out what that kind of error is called, and write that label in the second column. In the third column, write out what you need to find a solution, whether that’s a definition, an explanation, a page number in a book or an online link. Finally, in the last column, write out the corrected word, phrase, or sentence.

As a variation to the editing log, consider this modification:

Errors that might matter: Use modifiers clearly and precisely

Modifiers are words and phrases that add information to a sentence. They specify the meaning of (that is, they modify) a noun or verb. Sometimes the modifier is misplaced, ambiguous, or not clearly pertaining to a noun or verb (a so-called dangling modifier). These problems can lead the reader to wonder what exactly you’re claiming.

MISPLACED: The ski-jumper looked sleek in his new suit weighing only 140 pounds.

CORRECT: The ski-jumper looked sleek wearing a new suit and weighing only 140 pounds.

The suit didn’t weigh 140 pounds (one hopes); the ski-jumper did.

AMBIGUOUS: When formal rules and day-to-day practices differ, they should be changed.

CLEAR: Formal rules should be changed to match day-to-day practices.

CLEAR: Day-to-day practices should be changed to match the formal rules.

In the first version, it’s not clear what should be changed. The two clear versions make it obvious what the author is arguing.

DANGLING: Walking down the street, the houses glowed pink in the sunset.

CORRECT: Walking down the street, she saw houses glowing pink in the sunset.

The first version suggests that the houses were walking down the street. The pronoun to which that first phrase refers (“she”) is missing. The second version corrects that by bringing in the needed pronoun.

Many wrong-word errors that I see seem to be artifacts of the spell-checkers built into word-processing programs. For example, I often see “costumers” where students meant “customers,” “defiantly” instead of “definitely” and, somewhat comically, “martial” instead of “marital.”

Other wrong-word errors come from homonyms, two or more words that sound the same, such as the there/their/they’re or your/you’re errors. In college writing, another common one is the misuse of effect/affect. Use “effect” if you’re talking about the result of a cause as a noun, and “affect” if you mean influence or talking about emotion in psychology (in which case it’s pronounced AF-fect).

CORRECT: The effects of the conflict have been long-lasting.

CORRECT: The conflict has affected everyday life throughout the country.

CORRECT: Research shows that the presence of living plants impact both cognition and affect.

“Effect” can also be a verb, in which case it means to bring about: