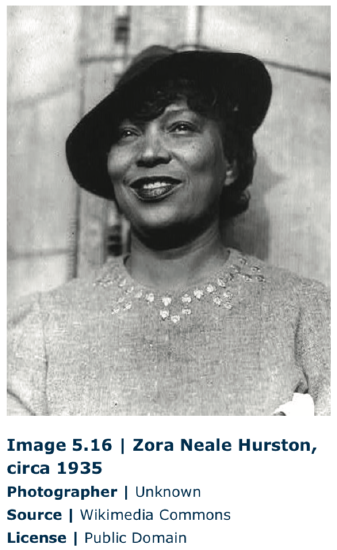 Zora Neale Hurston was born in 1891 in Alabama, moving with her family when she was a young child to Eatonville, Florida, one of the nation’s first all-black towns. Hurston enjoyed a happy childhood in Eatonville. In 1904, however, Hurston’s idyllic young life came to an end when her mother died. Hurston’s father soon remarried, and family life for Hurston became complicated. She moved frequently, living with relatives and working to support herself. Eventually, she attended Howard University where she nurtured her writing talent. She later attended Barnard College where she studied anthropology, earning her bachelor’s degree in 1928. In the 1920s, Hurston became one of the most important figures of the Harlem Renaissance, producing a number of literary pieces and working with Langston Hughes to launch a literary magazine that promoted the talents of young African-American writers. In the 1930s, Hurston enjoyed one of her most productive decades. She conducted anthropological fieldwork across the South, studying African-American folklore, and she traveled in Haiti and Jamaica, where she conducted research on spiritual practices including hoodoo and voodoo. Her book Mules and Men, published in 1935, remains an important work on African-American folklore. In 1937, she published her most well-known novel, Their Eyes Were Watching God, an early African-American feminist work that inspired later writers such as Alice Walker. During the next twenty years, Hurston continued to work as a journalist and a freelance writer. She married twice, but each marriage ended. By the time of her death, she was living in Florida in relative obscurity and poverty, dying of a stroke in 1960.

Unlike her contemporaries, Richard Wright and Ralph Ellison, Hurston in her fiction did not take on overtly political or racial themes. Like many artists in the Harlem Renaissance in the 1920s, Hurston’s art was essentially apolitical. Hurston’s work celebrated racial pride and African-American culture without any filtering, and characters’ power came from their own self-discoveries and their own inner resources. In her most critically acclaimed novel, Their Eyes Were Watching God, the main character Janie Crawford comes of age, moving from a young girl taught by her grandmother that she must be cared for by a man to a young woman trapped in an abusive marriage to a self-actualized woman who loves herself and lives life on her own terms, including freely expressing her sexuality. In “Sweat,” Hurston explores a similar theme of self-liberation. Delia Jones, trapped in an abusive marriage to Sykes, a brutal man who beats her and uses her for material gain, finds within herself the power to stand up to him and order him from the home and business she has built through her own sweat. When he plans retribution by exposing Delia to a rattlesnake in her home, she beats him at his own game. Sykes, at the end of the story, sweats for a change.