This grain crop produces edible seeds that are high in protein and played an essential role in the Inca diet.

This Inca citadel was probably built for the emperor Pachacutec around 1450 CE in the Andes at a height of around 8,000 feet above sea level using dry stone masonry.

A lower-grade textile woven from llama wool and used for everyday household chores and cleaning.

The Inca Empire, or Inka Empire, was the largest empire in pre-Columbian America. The civilization emerged in the 13th century and lasted until it was conquered by the Spanish in 1572. The administrative, political, and military center of the empire was located in Cusco (also spelled Cuzco) in modern-day Peru. From 1438 to 1533, the Incas used a variety of methods, from conquest to peaceful assimilation, to incorporate a large portion of western South America. Beginning with the rule of Pachacuti-Cusi Yupanqui, the Inca expanded their borders to include large parts of modern Ecuador, Peru, western and south-central Bolivia, northwest Argentina, north and north-central Chile, and southern Colombia. This vast territory was known in Quechua (the language of the Inca Empire) as Tawantin Suyu, or the Four Regions, which met in the capital of Cusco. 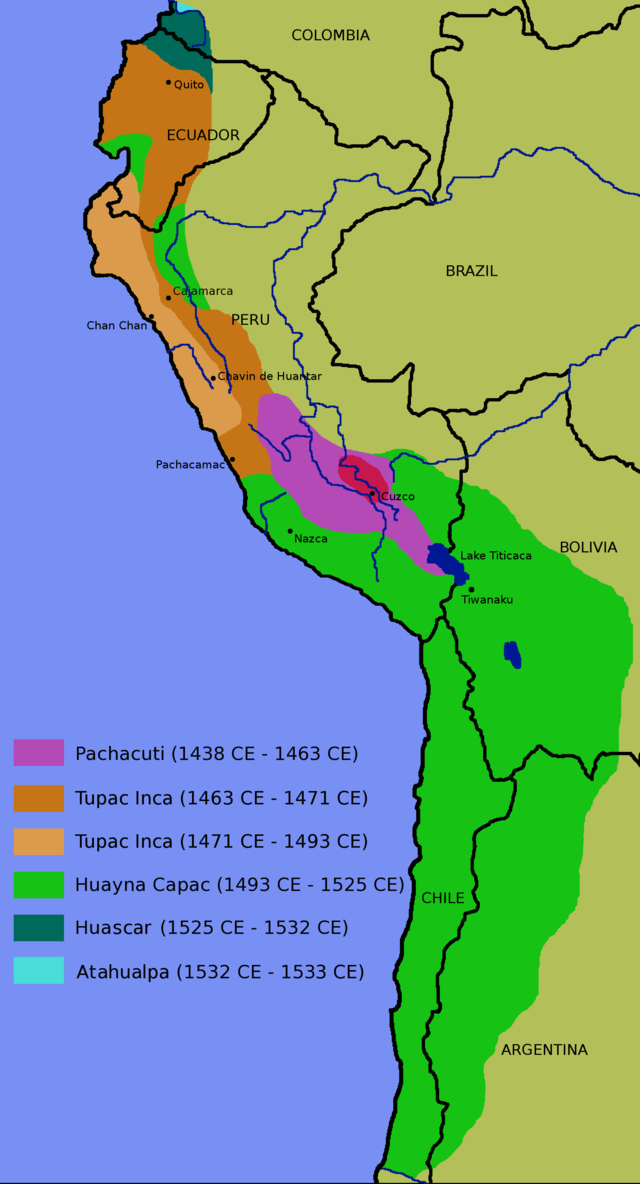 Inca Empire. From 1438 to 1533, the Inca Empire expanded significantly.

Architecture illustrates the sophistication and technical skill typical of the Inca Empire. The main example of this resilient art form was the capital city of Cusco, which drew together the Four Regions. The Inca used a mortarless construction technique, called dry stone wall, that fit stones together so well that a knife could not be fitted through the stonework. This was a process first used on a large scale by the Pucara (c. 300 BCE–300 CE) peoples to the south in Lake Titicaca, and later in the great city of Tiwanaku (c. 400–1100 CE) in present-day Bolivia. The rocks used in construction were sculpted to fit together exactly by repeatedly lowering one rock onto another and carving away any sections on the lower rock where there was compression or the pieces did not fit exactly. The tight fit and the concavity on the lower rocks made them extraordinarily stable.

Machu Picchu was built around 1450, at the height of the Inca Empire. It is a rare example of this architectural building technique and remains in remarkable condition after many centuries. The construction of Machu Picchu appears to date from the period of the two great Inca emperors, Pachacutec Inca Yupanqui (1438–1471) and Tupac Inca Yupanqui (1472–1493), and was probably built as a temple for the emperor Pachacutec. Machu Picchu was abandoned just over 100 years later, in 1572, as a belated result of the Spanish Conquest, possibly related to smallpox. Textiles were one of the most precious commodities of the Inca culture and denoted a person’s social status, and often their profession. The brightly colored patterns on a wool tunic represented various positions and achievements. For example, a black-and-white checkerboard pattern topped with a pink triangle denoted a soldier. Because textiles were so specific to a person’s class and employment, citizens could not change their wardrobe without the express permission of the government. Textiles were also manufactured that could only be used for certain tasks or social arenas. A rougher textile, spun from llama wool and called awaska, was used for everyday household chores. On the other hand, a fine-spun, very soft cloth made from vicuña wool could only be used in religious ceremonies. Inca tunic. The complex patterns woven into most Inca textiles and made into tunics, like this one, denoted a person’s position in society.

Although textiles were considered the most precious commodity in Inca culture, Incas also considered ceramics and metalwork essential commodities of the economy and class system. Incan pottery was distinctive and normally had a spherical body with a cone-shaped base. The pottery would also include curved handles and often featured animal heads, such as jaguars or birds. These ceramics were painted in bright colors, such as orange, red, black, and yellow.

The Inca also required every province to mine for precious metals like tin, silver, gold, and copper. The intricate metalwork of the Inca was heavily influenced by the Chimú culture, which was conquered and absorbed into the Inca culture around 1470. This metalwork included detailed friezes and patterns inlaid into the metal. Fine silver and gold were made into intricate decorative pieces for the emperors and elites based on these Chimú metallurgy traditions, and often included animal motifs with butterflies, jaguars, and llamas etched into the metal. Skilled metallurgists also transformed bronze and copper into farming implements, blades, axes, and pins for everyday activities.

The Inca culture boasted a wide variety of crops, numbering around seventy different strains in total, making it one of the most diverse crop cultures in the world. Some of these flavorful vegetables and grains included:

These crops were grown in the high-altitude Andes by building terraced farms that allowed farmers to utilize the mineral-rich mountain soil. The quick change in altitude on these mountain farms also utilized the micro-climates of each terrace to grow a wider range of crops. The Inca also produced bounties in the Amazon rainforest and along the more arid coastline of modern-day Peru.

Alongside vegetables, the Inca supplemented their diet with fish, guinea pigs, camelid meat, and wild fowl. They also fermented maize, or corn, to create the alcoholic beverage chicha.