Following are a number of schemata for keyboard-style voice-leading. Some of these are patterns that are common enough to warrant special attention (and memorization). Others require non-default voice-leading or doublings. In any case, these are worth memorizing to assist both in composition/arranging and in recognition of standard patterns. (Some will also come in handy for chorale-style voice-leading.)

A voice exchange occurs when the melody and bass lines exchange pitches over the course of a simple contrapuntal prolongation. For example, in the progression T1 D2 T3, the bass begins on do and ends on mi. In a voice exchange, the melody would reverse this, starting on mi and ending on do. This common pattern can use a V6/4, V4/3, or a VII6/3 chord for D2:

Using this voice exchange pattern will ensure smooth voice-leading throughout the prolongation.

Note that the fa in the D2 passing chord (a functional dissonance) of the second example does not resolve down to mi. This is permissible because mi is required of the bass line but cannot be doubled, and because the smooth outer-voice counterpoint and stepwise inner-voice motion counteract any harshness perceived by the unresolved dissonance.

The voice exchange can also be used with a D4 substitution chord. Note that the upper voices will be exactly the same as using a V6/4 for D2. These patterns can be used in major or minor, transposed to any key, and the D2 voice exchanges can be used in reverse, as well—T3 D2 T1. They can also be used to prolong S and D: S4 T5 S6 or D5 S6 D7, for example.

Do–re–mi in the bass is also frequently accompanied by mi–fa–sol in the melody, making parallel tenths. This pattern can also be used in major or minor, transposed to any key, and in reverse. It almost always uses a V4/3 for D2.

While T(1 D2p 3) is a perfectly acceptable way to accompany mi–fa–sol in the melody, a more interesting (and also more involved) way to harmonize that melody is what theorist Gene Biringer called the champagne progression: T1 S6 T3. (He called it this because it is “the progression you use when you want to impress a date.”)

The champagne progression is very nice, but must be treated carefully. Only use it with mi–fa–sol (or me–fa–sol) in the melody, and always use the following voice-leading (note the non-standard doubling of the bass—la/le—in the S6 chord). The standard champagne progression (above) uses a I6 chord for T3. Following is a variant using III for T3, which Biringer dubbed “pink champagne,” because it is especially nice. It should also be especially rare, or it loses its punch. The champagne progression should only be used to prolong tonic function.

A deceptive resolution occurs When a D5 (V or V7) chord does not progress, as expected, to I to form an authentic cadence, but instead progresses to VI. In the deceptive resolution, it is important for ti to resolve to do—as it would in an authentic cadence—not la/le. This fulfills its role as a tendency tone, helps the “deception” to work, and avoids the dissonant augmented second ti–le in minor. This results in a non-standard doubling of VI (do, rather than the bass).

Leaving out the fifth

When ti–do appears in the melody of an authentic cadence involving V7, it is impossible to fully voice both chords and resolve the functional dissonance. 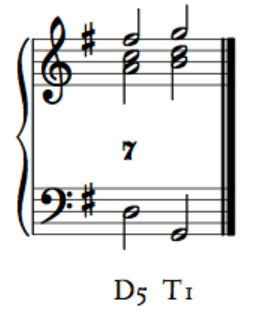 It is imperative to resolve this functional dissonance, as that resolution is an important contributor to the goal-oriented motion and the releasing of harmonic tension into the cadential arrival. In order to do so, either leave out the fifth of the I chord (and triple the bass): or leave out the fifth of the V7 chord, and double the bass: The incomplete V7 is preferable to the incomplete I, but voice-leading into the V7 will usually dictate which option you choose.

Leaving out the third

When an S4 progresses into a D5, and both are seventh chords, it can be impossible to prepare and resolve the functional dissonances of both chords while fully voicing them. Instead, leave la/le out of the S4 chord and double the bass. This will retain the trigger and bass note fa, as well as the two pitches making the dissonance (do and re or mi/me and fa), and will allow a second fa in an upper voice that can prepare the seventh of the D5 chord.