A common claim that Chinese writing is pictographic and each character represents a picture is not really true. Only a small amount of ancient characters evolved from pictures. The majority of modern Chinese characters are pictophonetic characters consisting of a semantic radical and a phonetic component.

Chinese characters can be divided into six categories based on the manner in which they are formed or derived.

Mandarin Chinese entirely lacks conjugation, the inflections of verbs to express different grammatical categories, such as tense, voice, person, and number. For this reason, Chinese is often described as an “isolating” language. Chinese shares some grammar rules with Western languages. The normal sentence order is Subject-Verb-Object, as in English. In general, Chinese grammar depends heavily on word order, function words, and context. Here are some characteristics of Mandarin Chinese:

Subject-dominant languages like English start a sentence with a subject. However, Chinese is a topic-dominant language like Japanese. The majority of Chinese sentences start with topics. For instance,

I have only a few friends.

2. Verbs have aspect rather than tense.

Mandarin Chinese adopts function words to express whether the action of the verb is “continuous” or “completed,” or to indicate if it has ever been experienced before. To express tense, a time phrase will be inserted in the sentence before or after the verb depending on the context.

3. Measure words (classifiers) are used between number words/specifiers and nouns. For instance:

In general, one character records one syllable, but one character often carries multiple meanings, related or unrelated. For instance, 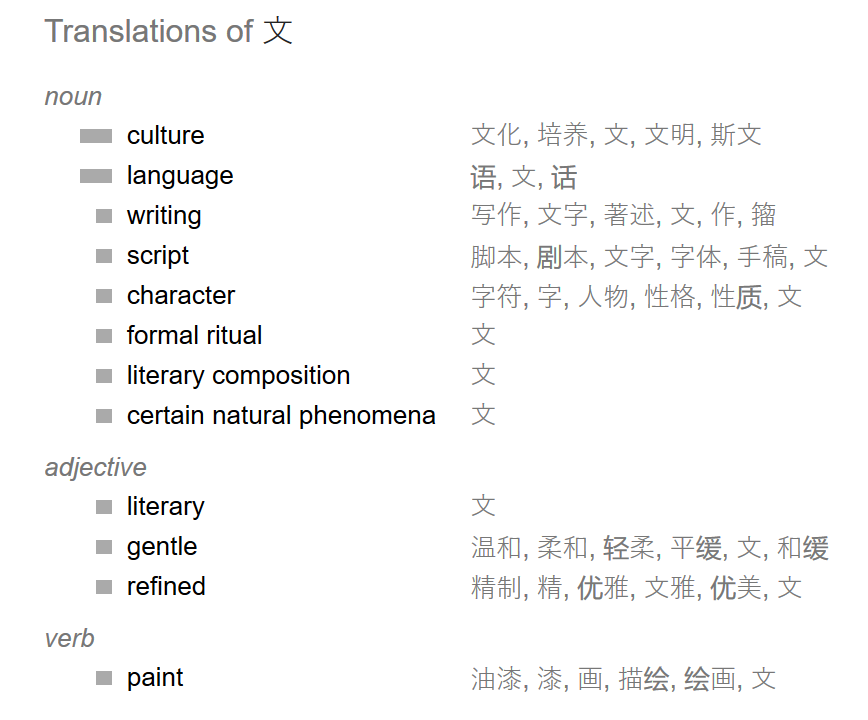 On the other hand, because Chinese words are built by blocks of characters/syllables, learning Chinese vocabulary can be significantly logical and efficient. For instance, by knowing 车means “vehicle,” people likely can guess that the meanings of the following words in Chinese are names of vehicles, but people will not have a clue to the words in the other column if they don’t know English.