Here’s the secret: your success with academic writing depends upon how well you understand what you are doing as you write, and then how you approach the writing task. Early research done on college writers discovered that whether students produced a successful piece of writing depended largely upon their representation of the writing task. The writers’ mental model for picturing their task made a huge difference. Most people as they start college have wildly strange ideas about what they are doing when they write an essay, or worse—they have no clear idea at all.

This module has demonstrated a very broad concept of the writing process, and in some senses a generic one. The next step for you, as a writer, is to visualize and customize your own personal process.

One final piece of advice: identify a metaphor for your writing process. Pat Thomson describes the value such a metaphor can give you, below. She’s describing writing her Ph.D. thesis, in this case:

When I was just beginning to write my own thesis I thought about it as a jigsaw. I just had to put all the little pieces together. At some point I had one of those aha moments when I realized that a jigsaw was a very unhelpful metaphor – a jigsaw has an original somewhere, it is about producing a predetermined image, and it already has set of relationships and a defined set of edges. My thesis and its authoring was actually nothing like this.

I decided I needed to rethink what I was doing. To help me do this I needed a new metaphor. I came to think that a more helpful approach to my thesis was thinking of it as making a patchwork quilt.

I had lots of pieces of stuff that I’d made up, hacked out, into some kind of shape. Some of the pieces were new material and others were made from second hand bits I’d found lying around (in books). I had to decide how big the quilt would be. Even though there was a recommended size, there was still the possibility of approaching the shape somewhat creatively. There was certainly plenty of opportunity for putting the separate pieces together in different ways. It all depended on the effect I was trying to achieve. As long as I had a good backing, and the stitching firmly anchored the result of my more creative handiwork to the backing, then there were quite a few possible variations in patterning available.

This was a metaphor which worked for me at the time. It put me in control of the process. It meant I spent time thinking about the structure of the text, and where the various pieces might go. There were many possible quilts to be made. I played with various options – what if this chapter was about this and that one about that – how did it compare to all the other possible theses that I could write? 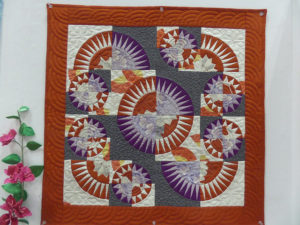 Thomson uses the patchwork quilt metaphor as descriptive of her process, and it also helps her define what her role in writing should be. Can you envision similar metaphors for yourself? Does writing a paper feel like creating a new galaxy to you? Does it seem like preparing for and undertaking a big trip to a foreign land? You can decide, and in doing so, you empower yourself to become a more confident writer.