The Sumerian people lived in Mesopotamia from the 27th-20th century BCE. They were inventive and industrious, creating large city-states, trading goods, mass-producing pottery, and perfecting many forms of technology.

To understand the history and accomplishments of the Sumerian people

“Sumerian” is the name given by the Semitic-speaking Akkadians to non-Semitic speaking people living in Mespotamia. City-states in the region, which were organized by canals and boundary stones and dedicated to a patron god or goddess, first rose to power during the prehistoric Ubaid and Uruk periods. Sumerian written history began in the 27th century BCE, but the first intelligible writing began in the 23rd century BCE. Classical Sumer ends with the rise of the Akkadian Empire in the 23rd century BCE, and only enjoys a brief renaissance in the 21st century BCE. The Sumerians were eventually absorbed into the Akkadian/Babylonian population.

The Ubaid period (6500-4100 BCE) saw the first settlement in southern Mesopotamia by farmers who brought irrigation agriculture. Distinctive, finely painted pottery was evident during this time.

The Uruk period (4100-2900 BCE) saw several transitions. First, pottery began to be mass-produced. Second, trade goods began to flow down waterways in southern Mespotamia, and large, temple-centered cities (most likely theocratic and run by priests-kings) rose up to facilitate this trade. Slave labor was also utilized.

The Early Dynastic period (2900-2334 BCE) saw writing, in contrast to pictograms, become commonplace and decipherable. The Epic of Gilgamesh mentions several leaders, including Gilgamesh himself, who were likely historical kings. The first dynastic king was Etana, the 13th king of the first dynasty of Kish. War was on the increase, and cities erected walls for self-preservation. Sumerian culture began to spread from southern Mesopotamia into surrounding areas.

Sumerian Necklaces and Headgear: Sumerian necklaces and headgear discovered in the royal (and individual) graves, showing the way they may have been worn.

During the Akkadian Empire period (2334-2218 BCE), many in the region became bilingual in both Sumerian and Akkadian. Toward the end of the empire, though, Sumerian became increasingly a literary language.

The Gutian period (2218-2047 BCE) was marked by a period of chaos and decline, as Guti barbarians defeated the Akkadian military but were unable to support the civilizations in place.

The Sumerian Renaissance/Third Dynasty of Ur (2047-1940 BCE) saw the rulers Ur-Nammu and Shulgi, whose power extended into southern Assyria. However, the region was becoming more Semitic, and the Sumerian language became a religious language.

The Sumerian Renaissance ended with invasion by the Amorites, whose dynasty of Isin continued until 1700 BCE, at which point Mespotamia came under Babylonian rule.

Many Sumerian clay tablets written in cuneiform script have been discovered. They are not the oldest example of writing, but nevertheless represent a great advance in the human ability to write down history and create literature. Initially, pictograms were used, followed by cuneiform, and then ideograms. Letters, receipts, hymns, prayers, and stories have all been found on clay tablets. 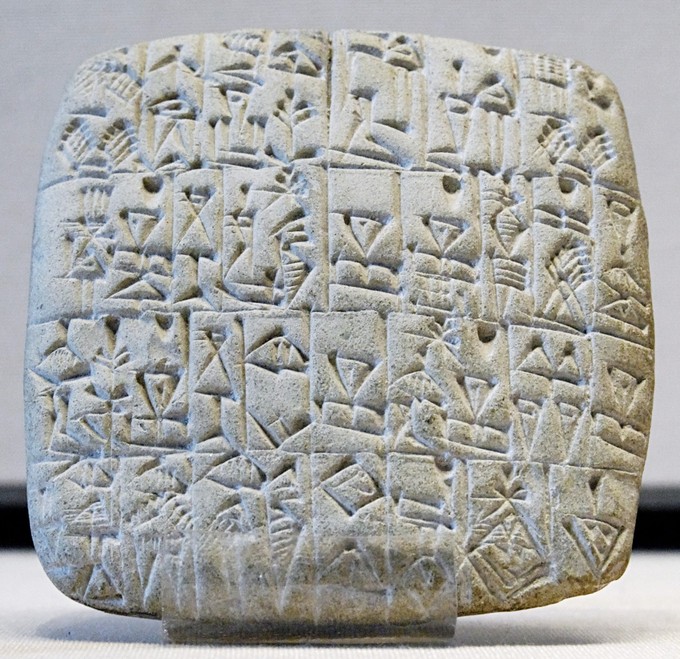 Bill of Sale on a Clay Tablet: This clay tablet shows a bill of sale for a male slave and building, circa 2600 BCE.

Sumerians believed in anthropomorphic polytheism, or of many gods in human form, which were specific to each city-state. The core pantheon consisted of An (heaven), Enki (a healer and friend to humans), Enlil (gave spells spirits must obey), Inanna (love and war), Utu (sun-god), and Sin (moon-god).

Sumerians invented or improved a wide range of technology, including the wheel, cuneiform script, arithmetic, geometry, irrigation, saws and other tools, sandals, chariots, harpoons, and beer.

The Assyrians were a major Semitic empire of the Ancient Near East, who existed as an independent state for approximately nineteen centuries between c. 2500-605 BCE, enjoying widespread military success in its heyday.

Describe key characteristics and notable events of the Assyrian Empire

The Assyrian Empire was a major Semitic kingdom, and often empire, of the Ancient Near East. It existed as an independent state for a period of approximately 19 centuries from c. 2500 BCE to 605 BCE, which spans the Early Bronze Age through to the late Iron Age. For a further 13 centuries, from the end of the 7th century BCE to the mid-7th century CE, it survived as a geo-political entity ruled, for the most part, by foreign powers (although a number of small Neo-Assyrian states arose at different times throughout this period). 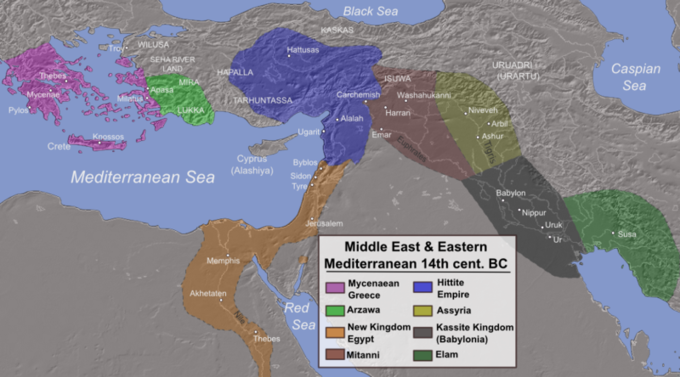 Map of the Ancient Near East during the 14th century BCE, showing the great powers of the day: This map shows the extent of the empires of Egypt (orange), Hatti (blue), the Kassite kingdom of Babylon (black), Assyria (yellow), and Mitanni (brown). The extent of the Achaean/Mycenaean civilization is shown in purple.

Centered on the Upper Tigris river, in northern Mesopotamia (northern Iraq, northeast Syria, and southeastern Turkey), the Assyrians came to rule powerful empires at several times, the last of which grew to be the largest and most powerful empire the world had yet seen.

As a substantial part of the greater Mesopotamian “Cradle of Civilization,” Assyria was at the height of technological, scientific, and cultural achievements for its time. At its peak, the Assyrian empire stretched from Cyprus in the Mediterranean Sea to Persia (Iran), and from the Caucasus Mountains (Armenia, Georgia, Azerbaijan) to the Arabian Peninsula and Egypt. Assyria is named for its original capital, the ancient city of Ašur (a.k.a., Ashur) which dates to c. 2600 BCE and was located in what is now the Saladin Province of northern Iraq. Ashur was originally one of a number of Akkadian city states in Mesopotamia. In the late 24th century BCE, Assyrian kings were regional leaders under Sargon of Akkad, who united all the Akkadian Semites and Sumerian -speaking peoples of Mesopotamia under the Akkadian Empire (c. 2334 BC-2154 BCE). Following the fall of the Akkadian Empire, c. 2154 BCE, and the short-lived succeeding Sumerian Third Dynasty of Ur, which ruled southern Assyria, Assyria regained full independence.

The history of Assyria proper is roughly divided into three periods, known as Old Assyrian (late 21st-18th century BCE), Middle Assyrian (1365-1056 BCE), and Neo-Assyrian (911- 612BCE). These periods roughly correspond to the Middle Bronze Age, Late Bronze Age, and Early Iron Age, respectively. In the Old Assyrian period, Assyria established colonies in Asia Minor and the Levant. Under king Ilushuma, it asserted itself over southern Mesopotamia. From the late 19th century BCE, Assyria came into conflict with the newly created state of Babylonia, which eventually eclipsed the older Sumero-Akkadian states in the south, such as Ur, Isin, Larsa and Kish. Assyria experienced fluctuating fortunes in the Middle Assyrian period. Assyria had a period of empire under Shamshi-Adad I and Ishme-Dagan in the 19th and 18th centuries BCE. Following the reigns of these two kings, it found itself under Babylonian and Mitanni-Hurrian domination for short periods in the 18th and 15th centuries BCE, respectively.

However, a shift in the Assyrian’s dominance occurred with the rise of the Middle Assyrian Empire (1365 BCE-1056 BCE). This period saw the reigns of great kings, such as Ashur-uballit I, Arik-den-ili, Tukulti-Ninurta I, and Tiglath-Pileser I. Additionally, during this period, Assyria overthrew Mitanni and eclipsed both the Hittite Empire and Egyptian Empire in the Near East. Long wars helped build Assyria into a warrior society, supported by landed nobility, which supplied horses to the military. All free male citizens were required to serve in the military, and women had very low status.

Beginning with the campaigns of Adad-nirari II from 911 BCE, Assyria again showed itself to be a great power over the next three centuries during the Neo-Assyrian period. It overthrew the Twenty-Fifth dynasty of Egypt, and conquered a number of other notable civilizations, including Babylonia, Elam, Media, Persia, Phoenicia/Canaan, Aramea (Syria), Arabia, Israel, and the Neo-Hittites. They drove the Ethiopians and Nubians from Egypt, defeated the Cimmerians and Scythians, and exacted tribute from Phrygia, Magan, and Punt, among others.

After its fall (between 612-605 BCE), Assyria remained a province and geo-political entity under the Babylonian, Median, Achaemenid, Seleucid, Parthian, Roman, and Sassanid Empires, until the Arab Islamic invasion and conquest of Mesopotamia in the mid-7th century CE when it was finally dissolved.

Assyria is mainly remembered for its military victories, technological advancements (such as using iron for weapons and building roads), use of torture to inspire fear, and a written history of conquests. Its military had not only general troops, but charioteers, cavalry, bowmen, and lancers.