The BBC’s David Dimbleby describes the historical significance of the Bayeux Tapestry for his forthcoming BBC One series, Seven Ages of Britain. 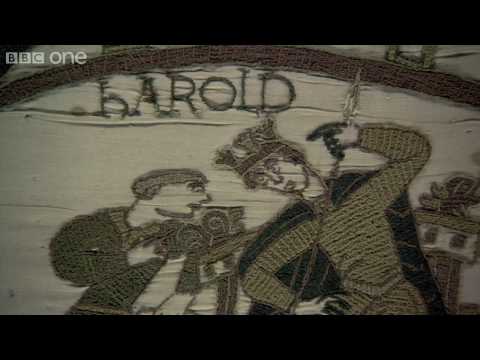 A YouTube element has been excluded from this version of the text. You can view it online here: http://pb.libretexts.org/temp/?p=2841

The title “Bayeux Tapestry” is a bit of a misnomer—the textile is embroidered wool on linen, and not actually a woven tapestry. The wool was dyed using the plants Woad, Madder, and Rocket. The linen canvas measures 20 inches in height by 130 feet  in length (50 cm × 70 m), and supports the narrative embroidery that tells of the Norman invasion of England—though very much from the Norman perspective.

The tapestry depicts Duke William of Normandy’s conquest of Harold Godwinson—England’s new and ill-fated King. The conquest is portrayed as fully justified, and Harold is represented as an opportunist who broke his oaths to Edward the Confessor, former King of England, and to William himself.

Although first known as William the “Bastard” (he was the illegitimate son of Robert the Magnificent and Herleva of Falaise), a name change accompanied his military success: he became known as William the “Conqueror.” The Norman conquest is a key turning point in Western history, and the English language still reflects this dominance of French over Saxon culture.