At a process known as “paper tech,” the stage manager will talk through all the cues with the designers and the director. Each cue will be discussed and named. Lighting cues are generally numbered as light boards work by number. Sound cues are typically lettered to differentiate them from the lighting cues. With today’s technology, however each designer will discuss how they want the cues designated. The director and designers will make best guesses where each cue will be called in the script and a short concept of what each cue will be. These discussions will make technical rehearsals more efficiently, as there will be less changes. Even so, all cues should be marked in pencil because they may move during the technical rehearsals

Frequently, the stage manager will continue to use the blocking script, but using the outside edge of the page with the text to mark the cues. If the stage manager chooses to use a clean script, they can, but it is generally prepared the same way, i.e. copying the script on to 8 ½” by 11” paper.

It is important that there be plenty of room as some shows involve many cues for the stage manager to call. If there have been any additions or deletions of text or stage business, these must be clearly marked in the script, because it is possible that a designer will place a cue on the additional text or action.

The cueing script is marked with three types of calls: Warnings, Stand-bys and Cues. A warning is a call to let certain technicians know that we are approaching the time a cue will happen. These are generally needed when a technician has not had a cue for several pages, or when a technician has a particularly challenging cue sequence to execute. The warning gives the technician time to prepare. A Stand-by means that the cue will be called imminently. Technicians at this point are fully ready to execute the cue on a moment’s notice. Warnings and Stand-bys are placed generally in the script as their calling does not need to be precise. The cues on the other hand are marked on a specific word or action. It is on this word or action that the “Go” for the cue needs to be called. Sometimes two cues may happen at the same time, or they may happen separately. If together the stage manager will say “Light 15 and Sound D … GO.” If they are to happen independently, but near to each other the stage manager will say “Lights 15 … GO, Sound D … GO.”

Stage manager often indicate the types of cue (such as light cue or sound cue) with the cue name. The cue types are often abbreviated: SQ for sound cue, LQ for light cue etc. Look at the sample cue page on the next page. 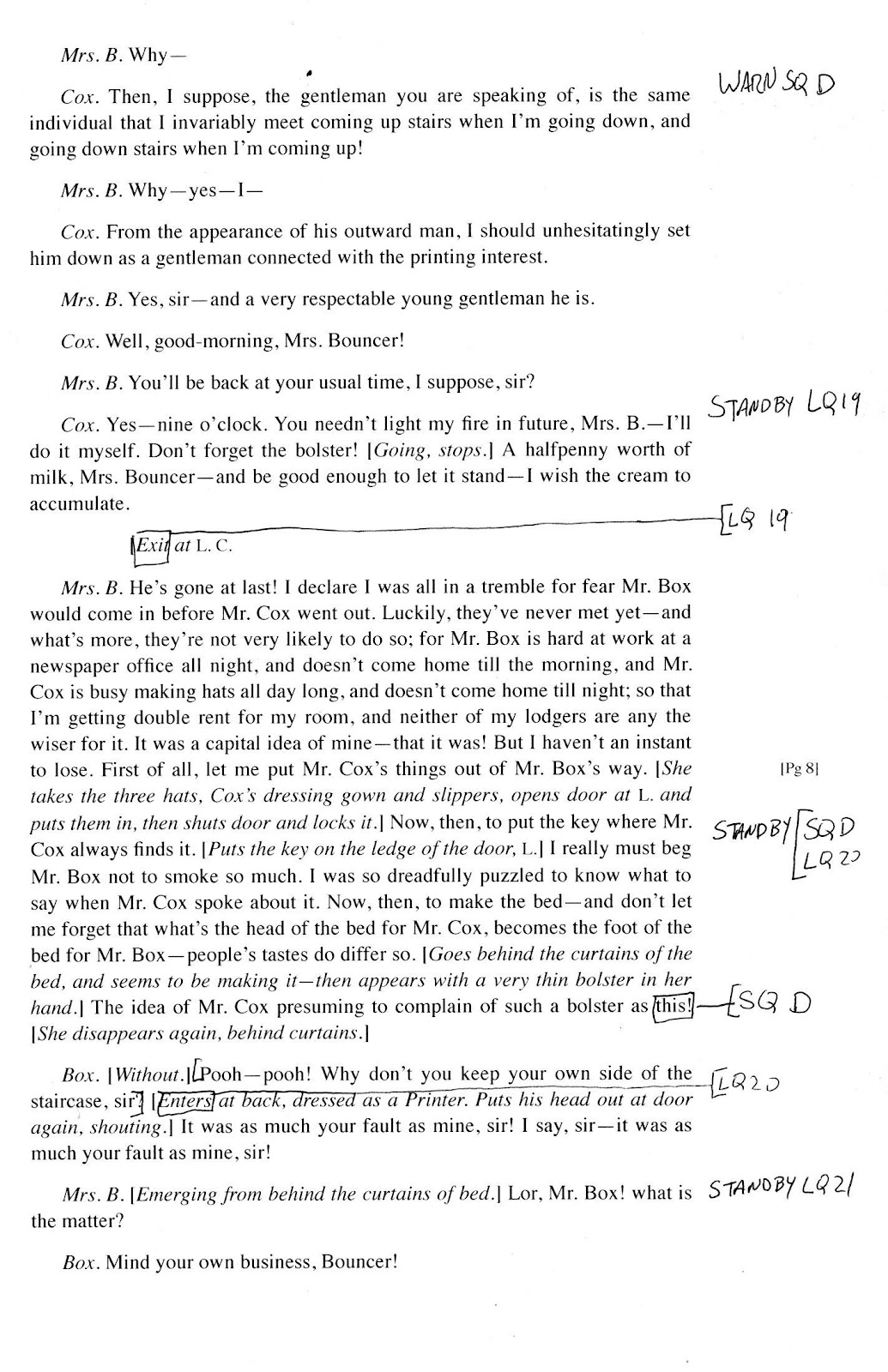 In the example on the previous page, we see that the stage manager plans to call the Stand-bys for D and 20 together, even though the two cues will actually called separately. Light cues 19 and 20 are called on specific actions, while sound cue D is called on the word “this.” It is important to notate all stand-bys and warnings be noted in the script, that way the stage manager won’t forget to call them.