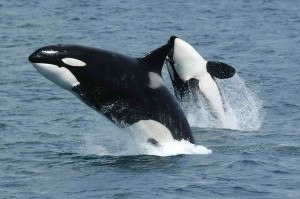 You are getting better and better at telling the difference between fact and opinion. Let’s practice one more time.

Which of these statements are facts? Which are opinions?

Predict whether these statements are true or false

You will return to your predictions after you read Spy-Hopping with Orca Whales.

When we read, we sometimes come across words we cannot sound out or do not understand. Sometimes writers put a definition of a word in the text so that you don’t have to look it up in a dictionary.

Here are some examples you have seen before:

Here are some examples you will see in the reading for this chapter:

When the writer does not give us the meaning, we can make a guess based on what makes sense. To make a good guess, we have to think about the other words around it. Read this sentence:

What word might make sense in the blank? Once you make a guess, you will likely find it easier to read this sentence:

Look quickly at Spy-Hopping with Orca Whales in your reader. Don’t read it, just find the words fluke, spy-hop, and breach. Read the paragraph that contains these words.

Write definitions for fluke, spy–hop, and breach in your own words.

4. Look at these sentences from the reading. Make a guess about what word goes in the blank. Does your guess sound right? Does it make sense? Write down your words.

c. In British Columbia, orca whales do something we do not understand. They come onto some beaches and rub their bodies on the smooth, round ________________.

Now it’s time to read Spy-Hopping with Orca Whales. You will see some bold words. If you do not know the word, look at the guess you wrote for the task above. Does it help you figure out the word?

Are these statements true or false?

Look back at the reading to find the answer. Then see if your guesses at the start of the chapter were right.

2. Orca whales hunt by sending out sound waves and listening as the waves come back.

3. If a whale’s fin flops to one side, it is a sign that the whale is stressed out.

5. Orca whales can hold their breath underwater for up to one hour.

6. What are the three ways? Write a summary paragraph. Then check your spelling and grammar. Follow this format when you write your paragraph:

b. Details of the three ways people are a threat to orca whales. Use your own words.

Homonyms are words that sound the same but have different meanings. For example, male and mail are homonyms. They sound the same. But a male is a man and mail is a letter or package with a stamp on it.

It is important to know which words are homonyms so that you can learn to spell the word that you mean. This way, your reader will understand what you are saying.

Spy-Hopping with Orca Whales has lots of homonyms.

Tale and tail sound the same. But they have different meanings. Look at these sentences:

a. In some tales, orca whales take people from canoes and turn them into whales, too.

b. Orca whales have tails called flukes. Their flukes give them power when swimming.

2. Which word means “the back part of an animal’s body”? Tale or tail?

No and know sound the same. But they have different meanings. Look at these sentences:

a. Did you know that orca whales cannot breathe underwater?

b. In British Columbia, orca whales do something no one understands.

4. Which word means “to have learned something”? No or know?

There and their sound the same. But they have different meanings. Look at these sentences:

a. Their fin keeps them stable when they go fast.

b. Up north, they tip floating sea ice so that seals, walruses, and sea lions will slide into the mouth of another whale who has been waiting there.

5. Which word means “in that place”? There or their?

6. Which word shows that “something belongs to someone”? There or their?

Two, to, and too sound the same. But they have different meanings. Look at these sentences:

a. Their two flippers help them steer.

b. Often the fins of whales that are kept in pools flop to one side.

c. The dams kill many salmon. With fewer salmon to eat, orca whales die, too.

8. Which word has to do with “the direction something is moving”?

Imagine that there was an oil spill off the coast of British Columbia.

You are a newspaper reporter. Write a paragraph about what happened. Include the five W’s – who, what, where, when, why – and how. Predict how the oil spill will affect wildlife in British Columbia.

Make a web before you write. Ask your instructor for a Make a Web sheet, or open and print one from the link.

You can use ideas from the reader, but do not copy word for word.

When you have finished:

Orca whales jumping by skeeze is in the public domain.