The most influential ancient sources of scientific knowledge were Ptolemy, a Greek astronomer and mathematician, and Aristotle. Both argued that the Earth was at the center of the universe, which consisted of a giant crystal sphere studded with the stars. That sphere slowly rotated, while the sun, moon, and planets were suspended above the earth within the sphere and also rotated around the Earth. Ptolemy, who lived centuries after Aristotle, elaborated on the Aristotelian system and claimed that there were not just one but close to eighty spheres, one within the other, which explained the fact that the different heavenly bodies did not all move in the same direction or at the same speed. The idea that the earth is at the center of the universe is known as geocentrism. 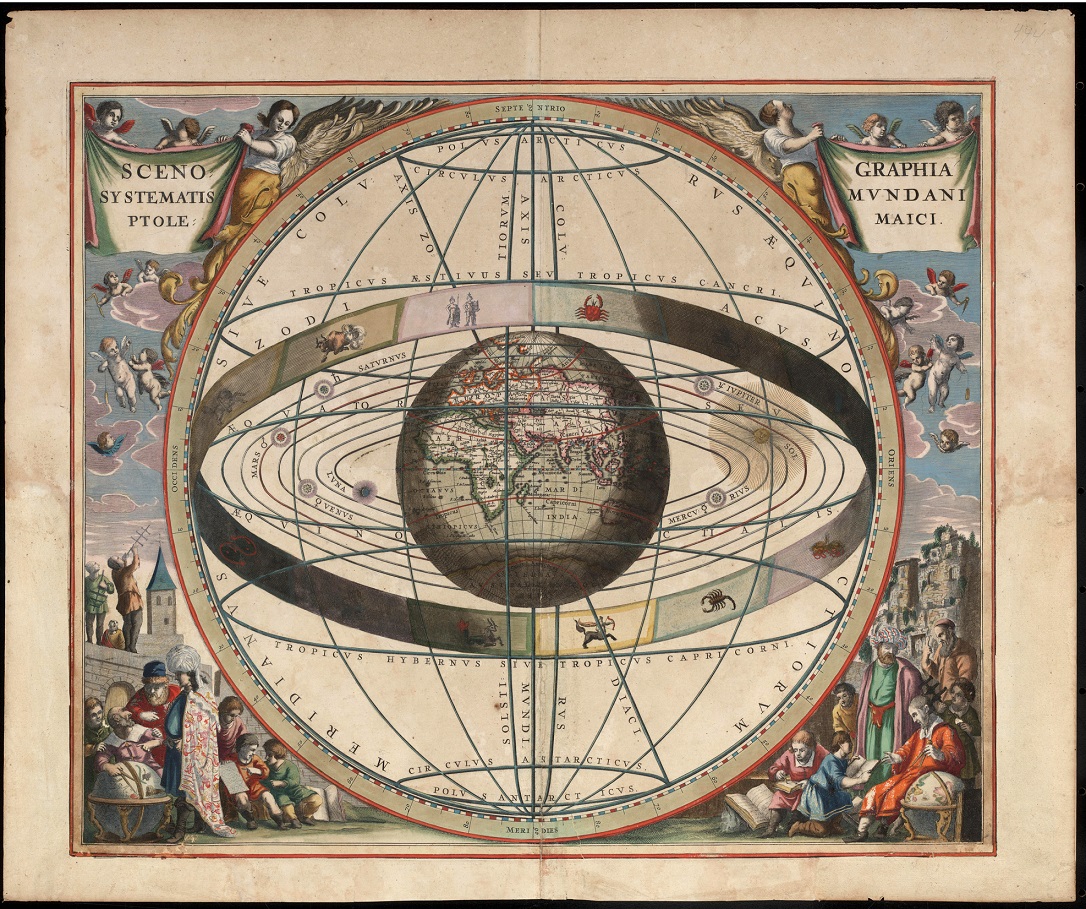 Figure 12.2.1: The geocentric universe illustrated, with the sun and planets revolving around the Earth. Interestingly, the illustration above was created in 1660, a few decades after Galileo popularized the fact that heliocentrism was completely inaccurate.

In this model of the universe, the earth was distinct from the other heavenly bodies. The earth was imperfect, chaotic, and changing, while the heavens were perfect and uniform. Thus, Christian thinkers embraced the Aristotelian model in part because it fit Christian theology so well: God and the angels were on the outside of the most distant crystal sphere in a state of total perfection, while humans and the devil were on, or inside in the case of Satan, the imperfect world. This Christianized version of an ancient Greek model of the universe is where the concept that God and heaven are "up in the sky" and hell is "below the ground" originated. When the astronomers of the Scientific Revolution started detecting irregularities in the heavens, this totally contradicted how most learned people thought about, and had thought about, the essential characteristics of the universe.

The problem with this model is that it did not match the observed paths taken by the stars and, especially, the planets, which do not follow regular, circular orbits. Medieval astronomers tried to account for these differences by ever-more-elaborate caveats and modifications to the idea of simple perfect orbits, positing the existence of hugely complex paths supposedly taken by various heavenly objects. A Polish priest, Nicolaus Copernicus (1473 – 1543), was the first to argue in a book published just before his death that the whole system would match reality if the sun was at the center of the orbits instead of the earth: this concept is called heliocentrism. He retained the idea of the crystal spheres, and he also used Ptolemy’s calculations in his own work, but his was nevertheless the first work to propose the concept of a heliocentric universe. Copernicus himself was a quintessential Renaissance man; he was a medical doctor, an accomplished painter, fluent in Greek, and of course, as an astronomer.

Copernicus’s theory was little known outside of astronomical circles, with most astronomers expressing dismay and skepticism at the idea of heliocentrism. A Danish astronomer named Tycho Brahe (1546 – 1601) tried to refute the Heliocentric theory by publishing a massive work of astronomical observations and corresponding mathematical data that attempted to demonstrate that the Earth was indeed at the center of the universe but that the heavenly bodies followed monstrously complex orbits. He spent twenty years carefully observing the heavens from his castle on an island near Copenhagen. The major importance of Brahe’s work for posterity was that it provided a wealth of data for later astronomers to work from, even though his central argument turned out to be inaccurate.

A German astronomer, Johannes Kepler (1571 – 1630), who had been Brahe’s assistant late in his life, ended up using Brahe’s data to argue against Brahe’s conclusion, demonstrating that the data actually proved that the sun was indeed at the center of the universe. Kepler also noticed that there was some kind of force emanating from the sun that seemed to hold the planets in orbit; based on the recent work of another scientist concerning magnets, Kepler concluded that some form of magnetism was likely the cause (in fact, Kepler had noticed the role of gravity in space). Interestingly, Kepler did his work while holding a position as the official imperial mathematician of the Holy Roman Emperor Rudolph II, who overlooked the fact that Kepler was a Protestant because he (Rudolph) was so interested in science - and this was against the backdrop of the Thirty Years’ War, no less!

In the end, the most significant publicist of heliocentrism was an Italian, Galileo Galilei (1564 - 1642). Galileo built a telescope based on a description he had heard and was delighted to discover previously unknown aspects of the heavenly bodies, such as the fact that the moon and sun did not have smooth, perfect surfaces, and that Jupiter had its own moons. He publicly demonstrated his telescope and quickly became well known among educated elites across Europe. His first major publication, The Starry Messenger in 1610, conclusively demonstrated that the heavens were full of previously unknown objects (e.g. the moons of Jupiter) and that planets and moons appeared to be “imperfect” in the same manner as the earth.

In 1632 he published a work, the Dialogue, that used the work of earlier astronomers and his own observations to support the heliocentric view of the universe; this work quickly became much better known than had Copernicus’s or Kepler’s. The Dialogue consisted of two imaginary interlocutors, one of whom presented the case for heliocentrism, the other for geocentrism. The supporter of heliocentrism wins every argument, and his debate partner, “Stupid” (Simplicio) is confounded. In publicizing his work, Galileo undermined the idea that the heavens were perfect, that the earth was central, and by extension, that ancient knowledge was reliable. Few things could have been more disruptive.

Galileo was tried by the Inquisition in 1633, in part because his former patron, the pope Urban VIII, thought that Galileo had been mocking him personally by naming the imaginary defender of the Ptolemaic view Stupid. Specifically, Galileo was accused of supporting a condemned doctrine, heliocentrism, not of heresy per se. Galileo was forced to recant and his book was placed on the Catholic Index of banned books, where it would remain until 1822. Much of the explanation for this persecution can be found in the fact that his work was published against the backdrop of religious war then engulfing Europe; the Catholic Church was not in a tolerant mode in the seventeenth century.

Galileo is less well remembered for his work in physics, but his work there was as important as his astronomy. Six years after the Dialogue was put on the Index, he published another work, Two New Sciences of Motion and Mechanics, that provided a theory and mathematical formulas of inertia and aspects of gravity. These theories refuted Aristotelian physics, which had claimed that objects only stay in motion when there is direct impetus; Galileo demonstrated through experiments the principles of inertia and acceleration and began the task of defining their operation mathematically.