Format note: This version is accessible to screen reader users.  Refer to these tips for reading our annotated sample arguments with a screen reader. For a more traditional visual format, see the PDF version of "Climate Explained: Why Carbon Dioxide Has Such Outsized Influence on Earth’s Climate."

Climate Explained: Why Carbon Dioxide Has Such Outsized Influence on Earth’s Climate

(Note: The title frames the article as a causal argument, a demonstration of how carbon dioxide affects the climate.)

Climate Explained is a collaboration between The Conversation, Stuff and the New Zealand Science Media Centre to answer your questions about climate change.

I am often asked how carbon dioxide can have an important effect on global climate when its concentration is so small – just 0.041% of Earth’s atmosphere. And human activities are responsible for just 32% of that amount. (Note: Jason West presents his article as a rebuttal to a counterargument.)

I study the importance of atmospheric gases for air pollution and climate change. (Note: West establishes his credibility as a researcher on the subject.)The key to carbon dioxide’s strong influence on climate is its ability to absorb heat emitted from our planet’s surface, keeping it from escaping out to space. (Note: West summarizes his causal argument by explaining a mechanism that could account for CO2's surprising effect on temperature.)

The scientists who first identified carbon dioxide’s importance for climate in the 1850s were also surprised by its influence. (Note: This bit of history underlines West's sympathy for the surprise expressed in the opening question.)Working separately, John Tyndall in England and Eunice Foote in the United States found that carbon dioxide, water vapor and methane all absorbed heat, while more abundant gases did not.

Scientists had already calculated that the Earth was about 59 degrees Fahrenheit (33 degrees Celsius) warmer than it should be, given the amount of sunlight reaching its surface. The best explanation for that discrepancy was that the atmosphere retained heat to warm the planet.

Tyndall and Foote showed that nitrogen and oxygen, which together account for 99% of the atmosphere, had essentially no influence on Earth’s temperature because they did not absorb heat. (Note: West shows how scientists eliminated what seemed like likely causes for the warming effect.) Rather, they found that gases present in much smaller concentrations were entirely responsible for maintaining temperatures that made the Earth habitable, by trapping heat to create a natural greenhouse effect.

A blanket in the atmosphere

Earth constantly receives energy from the sun and radiates it back into space. For the planet’s temperature to remain constant, the net heat it receives from the sun must be balanced by outgoing heat that it gives off. (Note: West gives background on what influences the earth's temperature.)

Since the sun is hot, it gives off energy in the form of shortwave radiation at mainly ultraviolet and visible wavelengths. Earth is much cooler, so it emits heat as infrared radiation, which has longer wavelengths.

Figure 2: The electromagnetic spectrum is the range of all types of EM radiation – energy that travels and spreads out as it goes. The sun is much hotter than the Earth, so it emits radiation at a higher energy level, which has a shorter wavelength. NASA

Carbon dioxide and other heat-trapping gases have molecular structures that enable them to absorb infrared radiation. The bonds between atoms in a molecule can vibrate in particular ways, like the pitch of a piano string. When the energy of a photon corresponds to the frequency of the molecule, it is absorbed and its energy transfers to the molecule. (Note: This section establishes agency, an explanation for how CO2 could trap heat.)

Most incoming shortwave radiation from the sun passes through the atmosphere without being absorbed. But most outgoing infrared radiation is absorbed by heat-trapping gases in the atmosphere. Then they can release, or re-radiate, that heat. Some returns to Earth’s surface, keeping it warmer than it would be otherwise.

Figure 3: Earth receives solar energy from the sun (yellow), and returns energy back to space by reflecting some incoming light and radiating heat (red). Greenhouse gases trap some of that heat and return it to the planet’s surface. NASA via Wikimedia. (Note: Figure 3, with the rightmost red stripe pointing back to earth, makes a visual argument that greenhouse gases trap heat.) 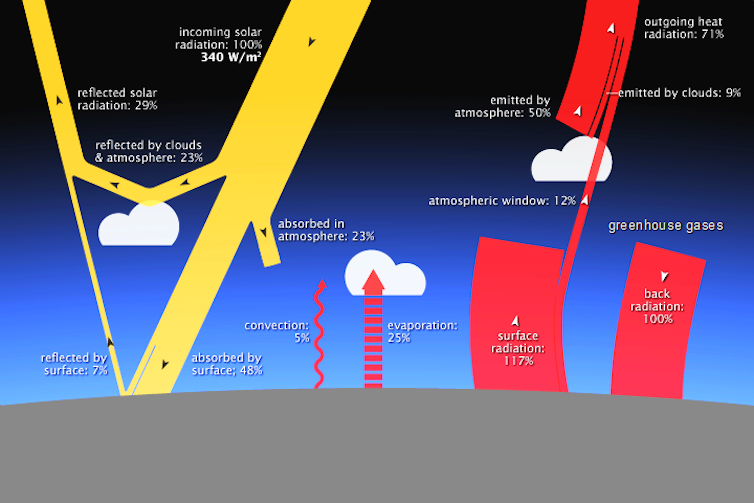 During the Cold War, the absorption of infrared radiation by many different gases was studied extensively. The work was led by the U.S. Air Force, which was developing heat-seeking missiles and needed to understand how to detect heat passing through air.

This research enabled scientists to understand the climate and atmospheric composition of all planets in the solar system by observing their infrared signatures. For example, Venus is about 870 F (470 C) because its thick atmosphere is 96.5% carbon dioxide. (Note: The comparison to Venus shows that a high concentration of carbon dioxide in the atmosphere correlates with high temperature on another planet.)

It also informed weather forecast and climate models, allowing them to quantify how much infrared radiation is retained in the atmosphere and returned to Earth’s surface.

People sometimes ask me why carbon dioxide is important for climate, given that water vapor absorbs more infrared radiation and the two gases absorb at several of the same wavelengths. The reason is that Earth’s upper atmosphere controls the radiation that escapes to space. The upper atmosphere is much less dense and contains much less water vapor than near the ground, which means that adding more carbon dioxide significantly influences how much infrared radiation escapes to space. (Note: In this paragraph, West eliminates another possible driver of climate change, heat-trapping water vapor.)

Carbon dioxide levels rise and fall around the world, changing seasonally with plant growth and decay.

Have you ever noticed that deserts are often colder at night than forests, even if their average temperatures are the same? Without much water vapor in the atmosphere over deserts, the radiation they give off escapes readily to space. In more humid regions radiation from the surface is trapped by water vapor in the air. Similarly, cloudy nights tend to be warmer than clear nights because more water vapor is present.

Even though water vapor is more important for the natural greenhouse effect, changes in carbon dioxide have driven past temperature changes. In contrast, water vapor levels in the atmosphere respond to temperature. As Earth becomes warmer, its atmosphere can hold more water vapor, which amplifies the initial warming in a process called the “water vapor feedback.” (Note: West describes a feedback loop or vicious circle where warming leads to more warming.) Variations in carbon dioxide have therefore been the controlling influence on past climate changes.

It shouldn’t be surprising that a small amount of carbon dioxide in the atmosphere can have a big effect. We take pills that are a tiny fraction of our body mass and expect them to affect us. (Note: West supports his causal claim by making a comparison to something more familiar, pills.)

Today the level of carbon dioxide is higher than at any time in human history. Scientists widely agree that Earth’s average surface temperature has already increased by about 2 F (1 C) since the 1880s, and that human-caused increases in carbon dioxide and other heat-trapping gases are extremely likely to be responsible. (Note: West points to a correlation between CO2 and temperature. Here he relies on experts to support the idea of causation.)

Without action to control emissions, carbon dioxide might reach 0.1% of the atmosphere by 2100, more than triple the level before the Industrial Revolution. This would be a faster change than transitions in Earth’s past that had huge consequences. Without action, this little sliver of the atmosphere will cause big problems. (Note: West ends with a brief prediction. He compares the potential rise in carbon dioxide with past changes to imply that the consequences of human-induced climate change will be more dramatic than in the past.)

This article is republished from The Conversation under a Creative Commons CC BY-ND 4.0 license. Annotations are by Anna Mills and licensed CC BY-NC 4.0.