Musicians have been bringing poetry to a mass audience who might not listen to or read poetry. The ultimate synthesis between rock music and lyrics can be a tricky one. The two forms of expression must complement each other in some kind of balance. Most rock productions tend to lean more on the music than the textual expression, while some singer/songwriters put more emphasis on the poetic choice of words in their songs. Bob Dylan and Leonard Cohen belong in the last category; their literary contributions to rock and pop over half a century ranks them among the greatest modernist and contemporary poets. Cohen said about Dylan that “he put the word back into the jukebox,” signifying the intrusion of art into popular culture. Dylan’s rich imagery and often surreal texts and Cohen’s silent and sharp poetic observations certainly were, and still are, read and listened to by an increasing audience all over the world. The songs are personal, often political but always original.

The American political scene of the sixties was one of turmoil and unrest with the assassinations of great leaders, race riots, civil rights rallies, the Vietnam War, the Cuba Crisis, student riots, anti-communism, and the Cold War – to list some of the key factors that characterised American society at the time. Like many of the modernist artists, Cohen and Dylan were more into their art than what was going on around them. After songs like “A Hard Rain’s A-Gonna Fall” and “Masters of War” Bob Dylan was embraced as a protest singer by the anti-war activists, who wanted to make him the voice of their generation. Admittedly, “Hard Rain” was spontaneously written during the Cuba Crisis, and he certainly is aware of political malpractice and injustice. But Dylan never wanted to be labelled and put into any specific category, and when he later left his acoustic concept and turned to a loud electric performance of his songs, there was uproar among his fans – accusing him of betraying their cause. But Dylan let them down and went his own unpredictable ways like he has always done.

Leonard Cohen never intended to become a singer at all. His ambition was to make a living out of his talent for writing. He published some novels in the early sixties that did not catch on very well, so he learned fingerpicking guitar and decided to put his poems into songs. This (probably much to his own surprise) went down with the bohemian beatniks of Greenwich Village, who cared more for a profound and mystic piece of poetry than a glittering stage act and loud music.

Bob Dylan did not set out to be a poet; his ambition was to become a folk singer in the tradition of Woody Guthrie. Leonard Cohen had studied poetry and was more conscious about his poetic project. Hence their poetic approaches are quite different and must be dealt with distinctively. What unifies the two is their integrity and devotion to their work. It is hard to pick representative examples of their massive production that spans over half a century, but the following quotes could be a small sample that may tease the appetite for a more in-depth study of their songs and poetry.

Unlike most modernist poets Cohen’s and Dylan’s poetry has a distinct rhythm and rhyme, which of course is because the poetry was meant for singing.

One of Bob Dylan’s most famous songs is “Mr. Tambourine Man,” from which these poetic lines are taken:

Yes, to dance beneath the diamond sky
With one hand waving free
Silhouetted by the sea, circled by the circus sands
With all memory and fate driven deep beneath the waves
Let me forget about today until tomorrow.

“Desolation Row” is another long poem stacked with enigmatic imagery and references to Shakespeare, Einstein and the Bible; this is the first stanza:

Desolation Road (Bob Dylan)
They’re selling postcards of the hanging
They’re painting the passports brown
The beauty parlor is filled with sailors
The circus is in town
Here comes the blind commissioner
They’ve got him in a trance
One hand is tied to the tight-rope dancer
The other is in his pants
And the riot squad, they’re restless
They need somewhere to go
As Lady and I look out tonight
From Desolation Row

Bono (of U2) said about the following lines: “I don’t have a clue about what it means, but it is beautiful”:

The lines are quite surreal; Dylan paints images and creates suggestive associations that stir the curiosity of his audience. 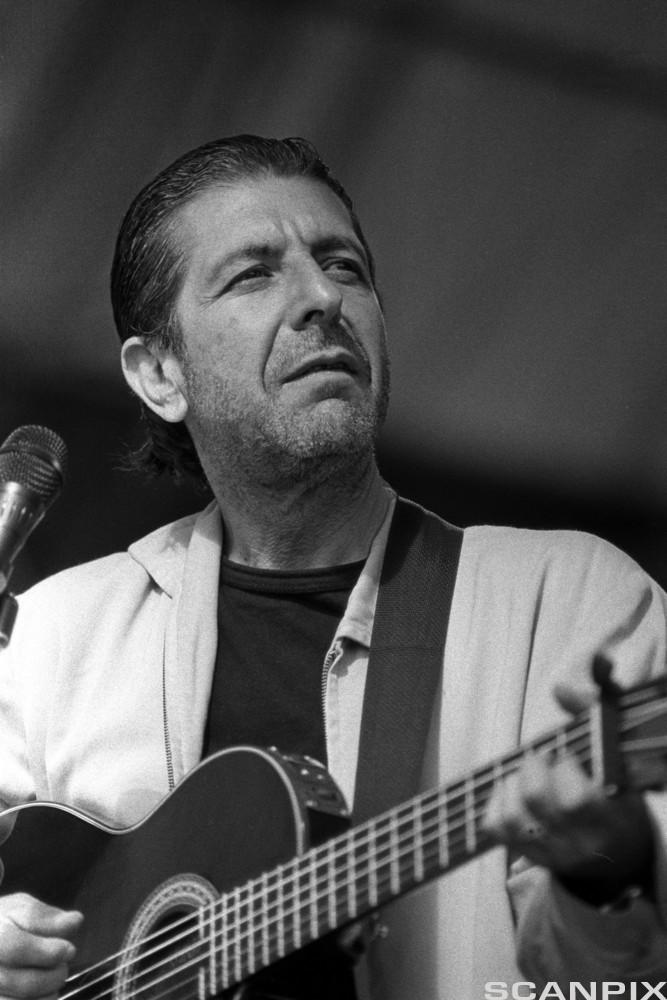 Leonard Cohen’s poetry is more subtle and low-voiced as he in this poem speaks of how love appears where you least expect it to. Note the poetic and evocative juxtapositions (birthmark/stain, snowman/rain etc.)

Love Calls You By Your Name (Leonard Cohen)
You thought that it could never happen
To all the people that you became,
Your body lost in legend, the beast so very tame.
But here, right here,
Between the birthmark and the stain
Between the ocean and your open vein,
Between the snowman and the rain
Once again, once again
Love calls you by your name.

The woman in your scrapbook
Whom you still praise and blame
You say they chained you to your fingernails
And you climb the halls of fame.
Oh, but here, right here
Between the peanuts and the cage
Between the darkness and the stage
Between the hour and the age
Once again, once again
Love calls you by your name

These are the two first stanzas of a beautiful song included on one of his early albums, Songs of Love and Hate (1971). The next example is an excerpt from a more recent poem, included on The Future (1992).

In his humble way Leonard Cohen has said about this poem that “it is probably the one I am most pleased with.” And indeed, the last two lines sum up much of Cohen’s poetry beautifully; his melancholy way of pointing out that despite, or even because of our defects we can see our blessings and the bright sides of life. Like the title of one of his novels also indicates, we are Beautiful Losers.

Bob Dylan was born in 1941 and Leonard Cohen in 1934. They are still active producing music and poetry, and they are both still touring.