Many digital literary scholars focus on geospatial technologies to look at literature in new ways enabled by new technologies. In his work Graphs, Maps, Trees: Abstract Models for a Literary History, Franco Moretti argues that creating maps of the spaces described in literary texts can give scholars insight into those texts in a way that their words alone cannot: “Literary maps…are a good way to prepare a text for analysis,” Moretti argues, “You choose a unit—walks, lawsuits, luxury goods, whatever—find its occurrences, place them in space…with a little luck, these maps will be more than the sum of their parts: they will possess ‘emerging’ qualities, which were not visible at the lower level.”Franco Moretti, Graphs, Maps, Trees: Abstract Models for a Literary History (London: Verso, 2005), 53. In other words, by mapping specific elements within texts, critics can gain a new perspective on how those elements relate to one another and to other textual elements. If, for instance, we map the locations that characters visit in Virginia Woolf’s novel Mrs. Dalloway, we might spot interesting relationships between the inner lives of the characters (as revealed in the text of the novel) and the exterior world of the modern, urban London they travel through (as revealed on the map).

Maria is a student in a sophomore-level literature class that has just finished Melville’s voluminous novel Moby-Dick (http://www.melville.org/diCurcio/bib.htm).Robert A. diCurcio, ed., Nantucket’s Tried-Out Moby-Dick: Robert A. diCurcio’s Companion Reader to Melville’s Masterpiece (Nantucket, MA: Aeternium, 1996), http://www.melville.org/diCurcio/bib.htm. Maria has already written one paper about Moby-Dick—a psychological analysis of the monomaniacal captain in the novel, Ahab—and wants to do something different for her final class project. Maria is very interested in the scope of the Pequod’s voyage, and so she decides to map the ship’s journey through the novel. She hopes that mapping the ship’s journey might illuminate other aspects of the novel that she had not previously considered. Fortunately, the free Google Earth software makes it easy to create detailed maps—even literary maps like the one Maria envisions.

After Maria adds her place markers, she can move from location to location in Google Earth and trace the Pequod’s voyage. She’s not entirely satisfied with her map, however. By default, Google Earth includes modern geographic information, and the events of Melville’s novel, published in 1852, look anachronistic on a twenty-first-century map. Maria brings her concern to her professor, who recommends she look at the David Rumsey Map Collection (http://www.davidrumsey.com), a freely distributed collection of scanned historical maps. The Rumsey Collection even makes many of their historical maps available as a KMZ file that can be easily opened in Google Earth (http://www.davidrumsey.com/view/google-earth).David Rumsey, David Rumsey Map Collection, http://www.davidrumsey.com/view/google-earth. 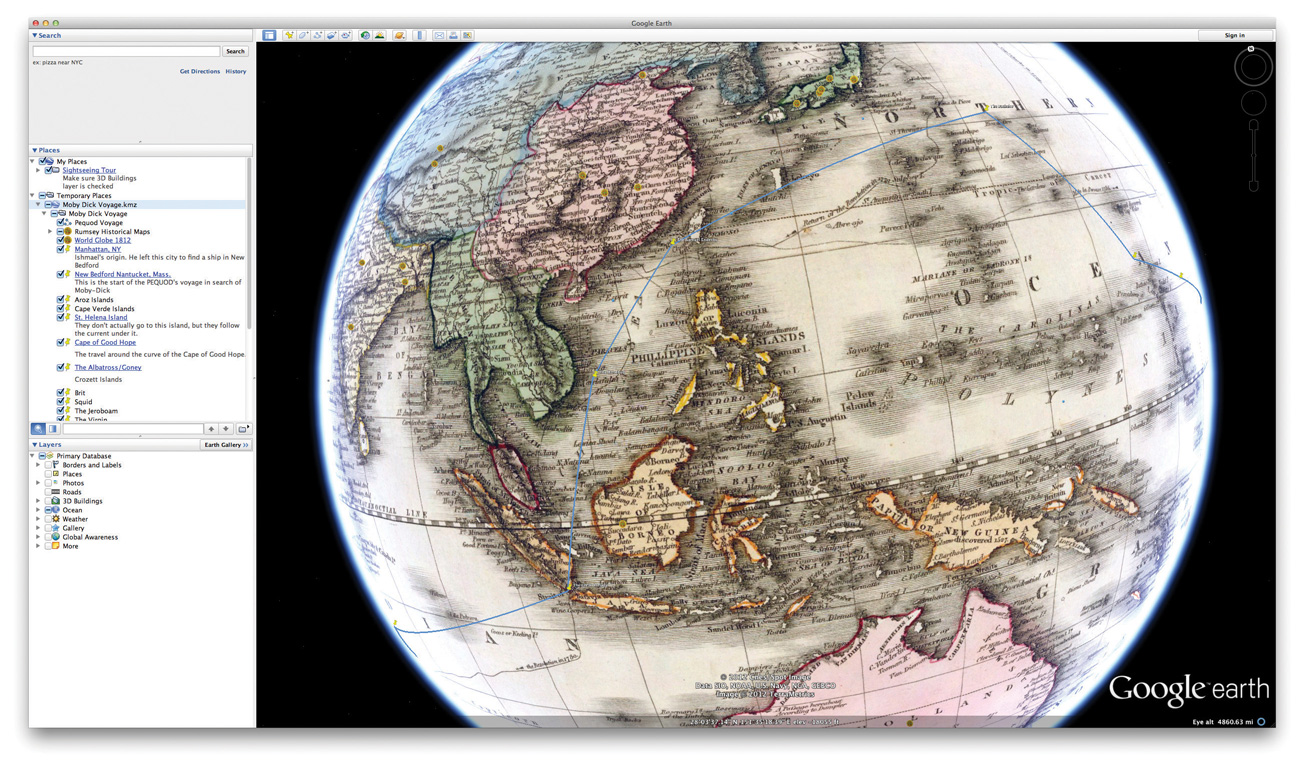 Maria’s final map, which you can see in Figure 9.1 "Maria’s Final Map", allows other students and scholars to follow the Pequod’s voyage for themselves, and even (if they wish) to layer different historical maps under it. You can download Maria’s KMZ yourself (http://www.flatworldknowledge.com/sites/all/files/pennington-mobydickvoyage.kmz) and experiment with the work she did. Now let’s look at Maria’s reflection paper, in which she explains what building this map taught her about Melville’s novel and the nineteenth-century whaling industry.