Lewis Carroll is most famous for two books: Alice’s Adventures in Wonderland (1865)Lewis Carroll, Alice’s Adventures in Wonderland. With Forty-Two Illustrations by John Tenniel (New York: D. Appleton, 1927; University of Virginia Library Electronic Text Center, 1998), http://etext.virginia.edu/toc/modeng/public/CarAlic.html. and Through the Looking-Glass(1872).Lewis Carroll, Through the Looking Glass and What Alice Found There (New York: Macmillan, 1899; University of Virginia Library Electronic Text Center, 1993), etext.lib.virginia.edu/toc/mo...c/CarGlas.html. These books follow the adventures of seven-year-old Alice, who tumbles down a rabbit hole (Wonderland) and enters a magic mirror (Looking-Glass), both of which lead her to a nonsensical world of the imagination. If you have not already read these classic books—or wish to reread them—you can access them at the following links:

Alice finds herself challenged to make sense of a world inhabited by odd creatures—some human, some not—who exist in a world that seems like nonsense. Throughout her adventures, Alice attempts to apply logic to her experiences; in other words, Alice tries to interpret and find meaning in Wonderland and Looking-Glass Land.

One scene in Through the Looking-Glass will be the keynote of this chapter, as we see Alice encountering Humpty Dumpty, who proceeds to interpret a poem that Alice stumbled on earlier in her journey.

There was a book lying near Alice on the table, and while she sat watching the White King (for she was still a little anxious about him, and had the ink all ready to throw over him, in case he fainted again), she turned over the leaves, to find some part that she could read, “—for it’s all in some language I don’t know,” she said to herself.

She puzzled over this for some time, but at last a bright thought struck her. “Why, it’s a Looking-glass book, of course! And if I hold it up to a glass, the words will all go the right way again.”

This was the poem that Alice read. 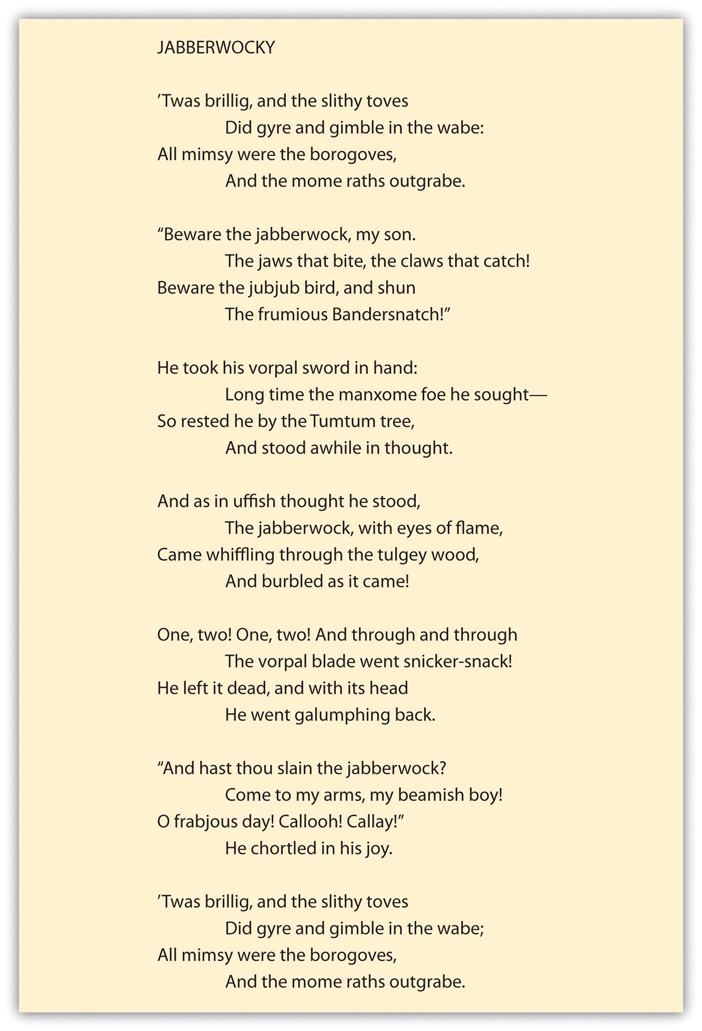 “It seems very pretty,” she said when she had finished it, “but it’s rather hard to understand!” (You see she didn’t like to confess, ever to herself, that she couldn’t make it out at all.) “Somehow it seems to fill my head with ideas—only I don’t exactly know what they are! However, somebody killed something: that’s clear, at any rate—”Lewis Carroll, Through the Looking Glass and What Alice Found There (New York: Macmillan, 1899; University of Virginia Library Electronic Text Center, 1993), chap. 1, etext.lib.virginia.edu/toc/mo...c/CarGlas.html. 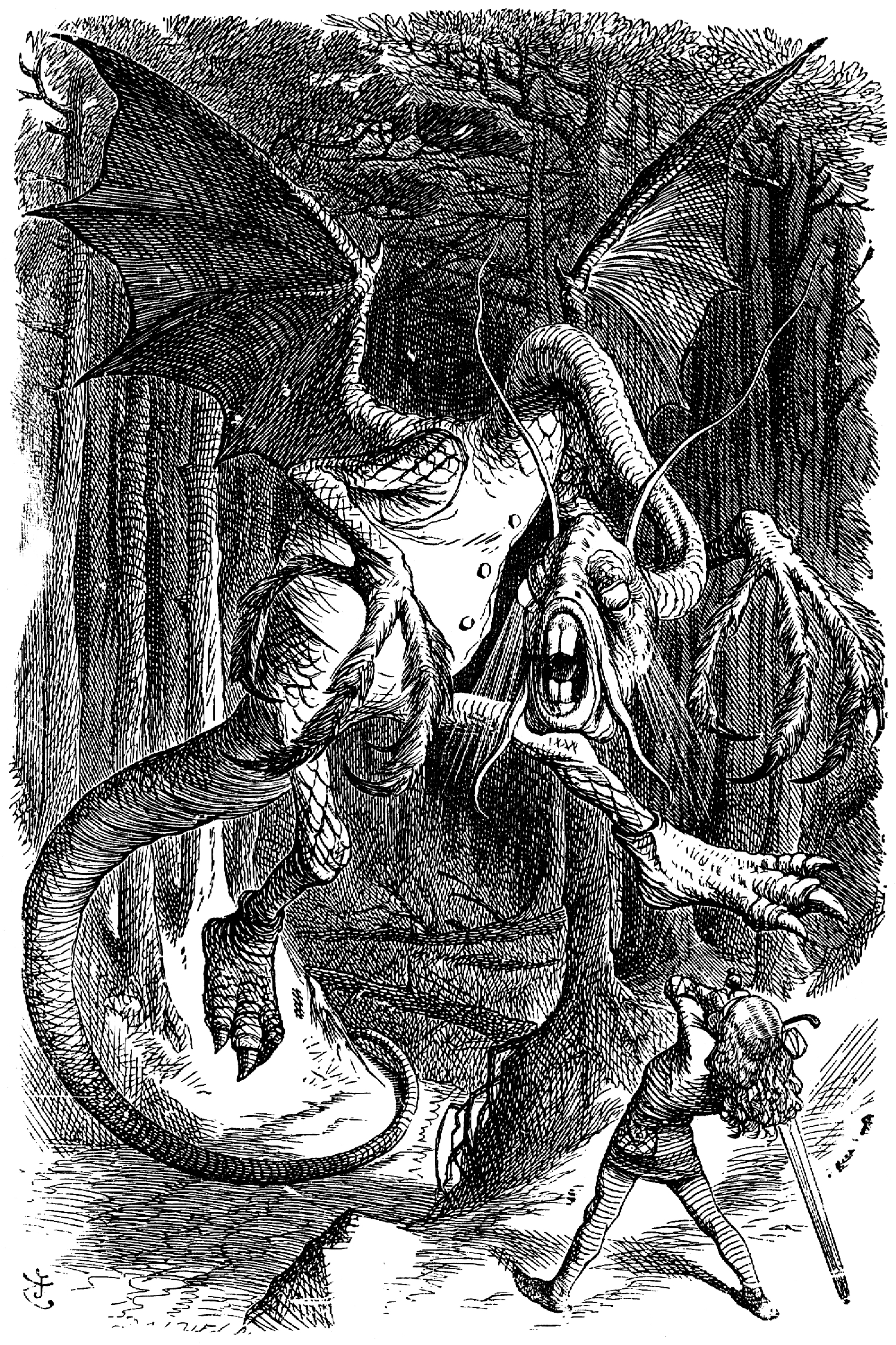 Illustration by Sir John Tenniel for Lewis Carroll’s Through the LookingGlass and What Alice Found There(1872).

We have all felt like Alice. What is that creature I’m battling? Sometimes poetry is the Jabberwock. Have you ever read Wallace Stevens’s “The Emperor of Ice-Cream”? Let’s do so now:

The Emperor of Ice-Cream

Call the roller of big cigars,

The muscular one, and bid him whip

Let the wenches dawdle in such dress

As they are used to wear, and let the boys

Let be be finale of seem.

The only emperor is the emperor of ice-cream.

Take from the dresser of deal,

On which she embroidered fantails once

And spread it so as to cover her face.

To show how cold she is, and dumb.

Let the lamp affix its beam.

The only emperor is the emperor of ice-cream.Wallace Stevens, “The Emperor of Ice-Cream,” Poets.org, http://www.poets.org/viewmedia.php/prmMID/15744.

Some may find Stevens’s poem as confusing as “Jabberwocky.” And like Alice, we desire to understand, to find meaning in order to appreciate the literary work. This is where a close reading, which focuses on form, becomes the foundation of all literary analysis.

Return of the Jabberwock

See, you did feel like Alice. She states that “somebody killed something” after her initial reading, but she realizes that her interpretation is not yet adequate. She needs to dig deeper in the text to extract more meaning. And here is where she meets Humpty Dumpty, who professes to be an excellent literary critic.

Let’s listen in again. If you wish, you can hear an audio recording of this encounter at http://ia600209.us.archive.org/8/items/looking-glass_librivox/lookingglass_06_carroll_64kb.mp3.

“You seem very clever at explaining words, Sir,” said Alice. “Would you kindly tell me the meaning of the poem called ‘Jabberwocky’?”

“Let’s hear it,” said Humpty Dumpty. “I can explain all the poems that were ever invented—and a good many that haven’t been invented just yet.”

This sounded very hopeful, so Alice repeated the first verse:

“’Twas brillig, and the slithy toves

Did gyre and gimble in the wabe;

All mimsy were the borogoves,

And the mome raths outgrabe.”

“That’s enough to begin with,” Humpty Dumpty interrupted: “there are plenty of hard words there. ‘Brillig’ means four o’clock in the afternoon—the time when you begin broiling things for dinner.”

“Well, ‘slithy’ means ‘lithe and slimy.’ ‘Lithe’ is the same as ‘active.’ You see it’s like a portmanteau—there are two meanings packed up into one word.”

“I see it now,” Alice remarked thoughtfully: “and what are ‘toves’?”

“They must be very curious looking creatures.”

“They are that,” said Humpty Dumpty: “also they make their nests under sun-dials—also they live on cheese.”

“To ‘gyre’ is to go round and round like a gyroscope. To ‘gimble’ is to make holes like a gimlet.”

“And ‘the wabe’ is the grass-plot round a sun-dial, I suppose?” said Alice, surprised at her own ingenuity.

“Of course it is. It’s called ‘wabe,’ you know, because it goes a long way before it, and a long way behind it—”

“And a long way beyond it on each side,” Alice added.

“Exactly so. Well, then, ‘mimsy’ is ‘flimsy and miserable’ (there’s another portmanteau for you). And a ‘borogove’ is a thin shabby-looking bird with its feathers sticking out all round—something like a live mop.”

“And then ‘mome raths’?’ said Alice. “I’m afraid I’m giving you a great deal of trouble.”

“Well, a ‘rath’ is a sort of green pig: but ‘mome’ I’m not certain about. I think it’s short for ‘from home’—meaning that they’d lost their way, you know.”

“And what does ‘outgrabe’ mean?”

“Well, ‘outgrabing’ is something between bellowing and whistling, with a kind of sneeze in the middle: however, you’ll hear it done, maybe—down in the wood yonder—and when you’ve once heard it you’ll be quite content. Who’s been repeating all that hard stuff to you?”

“I read it in a book,” said Alice.Lewis Carroll, Through the Looking Glass and What Alice Found There (New York: Macmillan, 1899; University of Virginia Library Electronic Text Center, 1993), chap. 6, etext.lib.virginia.edu/toc/mo...c/CarGlas.html.

This chapter will be your guide as you interpret a piece of literature and formulate a critical analysis around that interpretation. Let’s hope that your reading is a bit more on target than our silly friend’s!