The Harlem Renaissance was a name given to a period from 1918 to 1937, a movement of art, music, and literature transforming African American culture. The renaissance started in New York and spread throughout the creative arts, becoming the most influential African American movement. The movement covered literary, musical, visual arts, and the theater and remade concepts of how art was created and African Americans' participation in their own culture, separated from the white stereotype. The movement had a significant impact on black culture and future directions of all-American art. Harlem was the center of the movement and where the concentration of intellect and talent lived as it quickly spread throughout the country.

William Johnson (1901-1970) was a painter who graduated from the National Academy of Design I in New York, his style realistic or expressionistic based on how he portrayed people (12.56). Influenced by modernism, his flat characters (12.57) beautifully illustrated in bold and vibrant colors transitioning from expressionism to a more primitive, illustrative style. Johnson was known for his folk art style and liked to depict people in the normal activities of life (12.58). Jacob Lawrence (1917-2000) referred to his style as dynamic cubism seen in his self-similar to his hometown of Harlem. In his Migration series (12.59, 12.60), Lawrence painted one hundred panels depicting stories about the migration of black southerners who left the south in large numbers, moving to the north during that period. The first painting captioned by the different doors denoting people herded into cities, unknown people moving to unfamiliar places. Another of the painting demonstrates the agony incurred in the south or along the way, the lone person sitting, mourning the loss to the hangman's knot. His series were all painted in bright colors depicting abstract forms of people. He used a light sky blue-gray color in the background, perhaps illustrating the unknown outcome in each painting. Charles Henry Alston (1907-1977) was a painter and sculptor who became a supervisor for the WPA Federal Arts Project and designed murals for buildings in New York. His mural, Modern Medicine in the Harlem Hospital (12.61), was part of a diptych completed in 1936 and based upon the history of modern medicine in the African-American community. Refusing to paint in the latest style, Alston painted abstractly and figurative at the same time, basically declining to be stylistically consistent.

Aaron Douglas (1899-1979) was a significant figure in the Harlem Renaissance and was named the father of black American art. Earning a bachelor's degree in Fine Arts at the University of Nebraska, he moved to Harlem to become part of the new art scene and renaissance. Douglas used his unique style of painting, incorporating the elements of Egyptian mural paintings with art deco. The Power Plant (12.62) was a painting of the power plant located on the river, a sight familiar to everyone in New York. The painting captures the scene with boat activity on the water, factory spewing smoke from the tall chimneys, and people working on the docks. 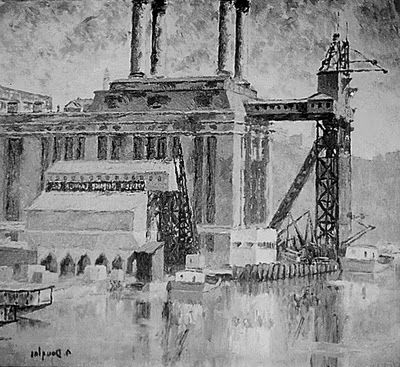 Sargent Claude Johnson (1888-1967) was an artist who worked in California, achieving national recognition. Johnson was known for his modern and abstract styles and worked in a variety of mediums, including clay, oil paint, stone, and printmaking. Chester (12.63) is a sculpture of an African-American boy made from terra cotta. The simplicity of the sculpture is what makes it such an outstanding piece of art.

Laura Wheeler Waring (1887-1948) was a prominent painter in the Harlem Renaissance. She also taught art at Cheyney University for over 30 years and was greatly influenced by the time she spent in Paris. Waring painted a portrait of James Weldon Johnson, (12.64) a civil rights activist and leader of the NAACP. In 1926, Waring won a gold medal from the Harmon Foundation for her portrait of Anne Washington Derry (12.65). Many of Waring's paintings are hanging in the National Portraits Gallery's permanent collection. 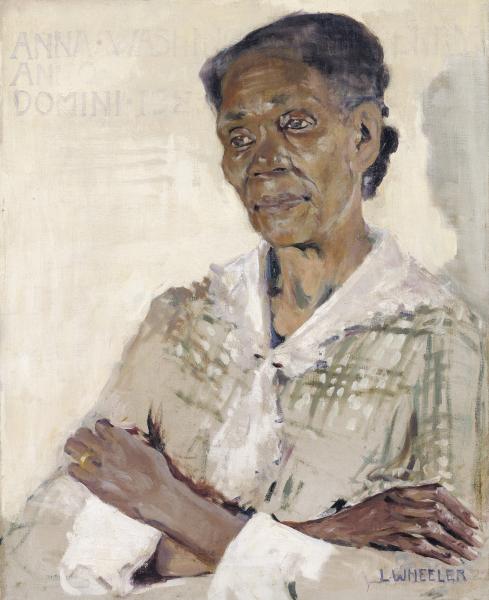 Archibald John Motley Junior (1891-1981) painted about the African-American experience during the 1920s and 1930s in Chicago. Motley studied art at the School of the Art Institute of Chicago and is believed to be one of the significant contributors to the Harlem Renaissance movement. He specialized in portraiture depicting the culture of African-Americans, frequently using bright, almost fluorescent colors in paintings. The colorful backyard barbeque scene (12.66) captures the fun nights of gathering together to eat and dance. 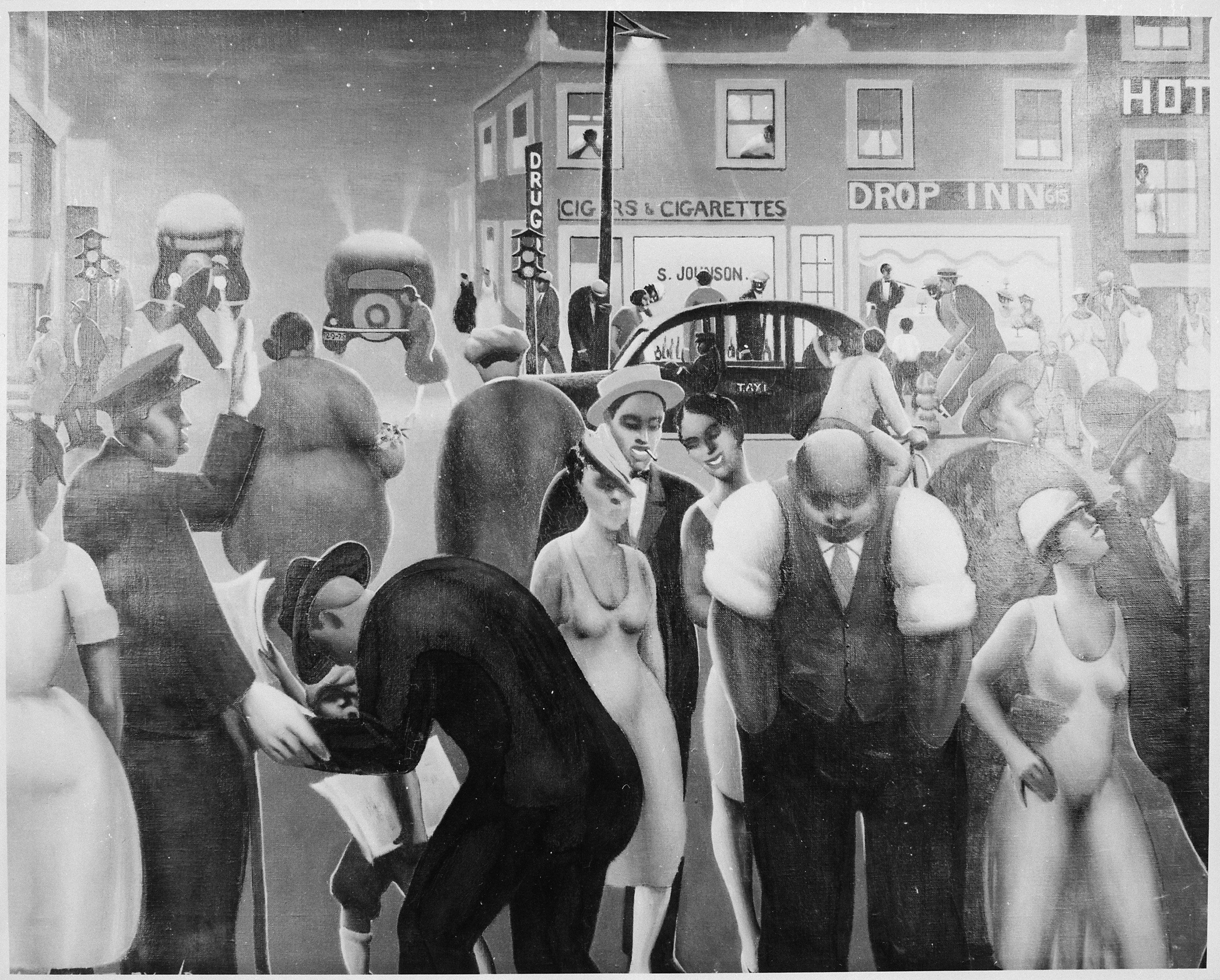 The two other paintings are black and white photographs of his colored paintings, both showing the importance of jazz music in their culture and how it influenced and emphasized their cultural identity (12.67, 12.68). Motley was interested in the thousands of different shades of skin color and used color to paint each person slightly different, closer to reality, including himself in a self-portrait (12.69). He realized that skin color determined your status in life, which he struggled within the context of racial identity. James Richmond Barthé (1901-1989) was a sculptor known for his portrayal of black subjects and the diversity and spirituality of man. During the 1930s Barthe moved from Mississippi to The Art Institute of Chicago and then New York, joining other artists in Harlem. Barthe was inspired by the Cuban Featherweight Kid Chocolate (12.70), rendering him in bronze with a lean, muscular stance on the balls of his feet ready to fight. The statue displays a delicacy of movement and fluid grace, similar to jazz music. His bust of Booker T. Washington (12.71) was one of many sculptures he did of well-known people. 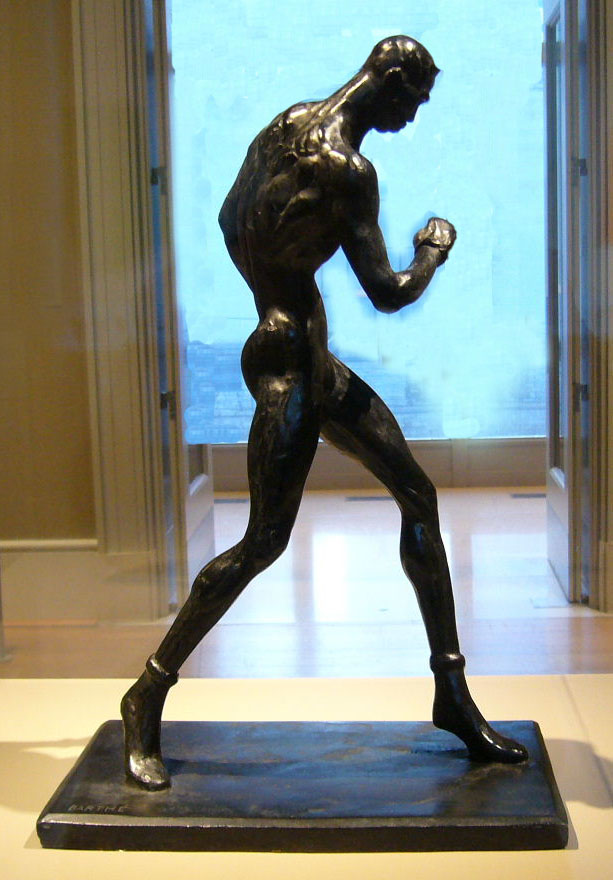