Most epithelial tissues are essentially large sheets of cells covering all the surfaces of the body exposed to the outside world and lining the outside of organs. Epithelium also forms much of the glandular tissue of the body. Skin is not the only area of the body exposed to the outside. Other areas include the airways, the digestive tract, as well as the urinary and reproductive systems, all of which are lined by an epithelium. Hollow organs and body cavities that do not connect to the exterior of the body, which includes, blood vessels and serous membranes, are lined by endothelium (plural = endothelia), which is a type of epithelium.

Epithelial cells derive from all three major embryonic layers. The epithelia lining the skin, parts of the mouth and nose, and the anus develop from the ectoderm. Cells lining the airways and most of the digestive system originate in the endoderm. The epithelium that lines vessels in the lymphatic and cardiovascular system derives from the mesoderm and is called an endothelium.

All epithelia share some important structural and functional features. This tissue is highly cellular, with little or no extracellular material present between cells. Adjoining cells form a specialized intercellular connection between their cell membranes called a cell junction. The epithelial cells exhibit polarity with differences in structure and function between the exposed or apical facing surface of the cell and the basal surface close to the underlying body structures. The basal lamina, a mixture of glycoproteins and collagen, provides an attachment site for the epithelium, separating it from underlying connective tissue. The basal lamina attaches to a reticular lamina, which is secreted by the underlying connective tissue, forming a basement membrane that helps hold it all together.

Epithelial tissues are nearly completely avascular. For instance, no blood vessels cross the basement membrane to enter the tissue, and nutrients must come by diffusion or absorption from underlying tissues or the surface. Many epithelial tissues are capable of rapidly replacing damaged and dead cells. Sloughing off of damaged or dead cells is a characteristic of surface epithelium and allows our airways and digestive tracts to rapidly replace damaged cells with new cells.

Epithelial tissues provide the body’s first line of protection from physical, chemical, and biological wear and tear. The cells of an epithelium act as gatekeepers of the body controlling permeability and allowing selective transfer of materials across a physical barrier. All substances that enter the body must cross an epithelium. Some epithelia often include structural features that allow the selective transport of molecules and ions across their cell membranes.

Many epithelial cells are capable of secretion and release mucous and specific chemical compounds onto their apical surfaces. The epithelium of the small intestine releases digestive enzymes, for example. Cells lining the respiratory tract secrete mucous that traps incoming microorganisms and particles. A glandular epithelium contains many secretory cells.

Cilia are microscopic extensions of the apical cell membrane that are supported by microtubules. They beat in unison and move fluids as well as trapped particles. Ciliated epithelium lines the ventricles of the brain where it helps circulate the cerebrospinal fluid. The ciliated epithelium of your airway forms a mucociliary escalator that sweeps particles of dust and pathogens trapped in the secreted mucous toward the throat. It is called an escalator because it continuously pushes mucous with trapped particles upward. In contrast, nasal cilia sweep the mucous blanket down towards your throat. In both cases, the transported materials are usually swallowed, and end up in the acidic environment of your stomach.

Cells of epithelia are closely connected and are not separated by intracellular material. Three basic types of connections allow varying degrees of interaction between the cells: tight junctions, anchoring junctions, and gap junctions (Figure 4.5). 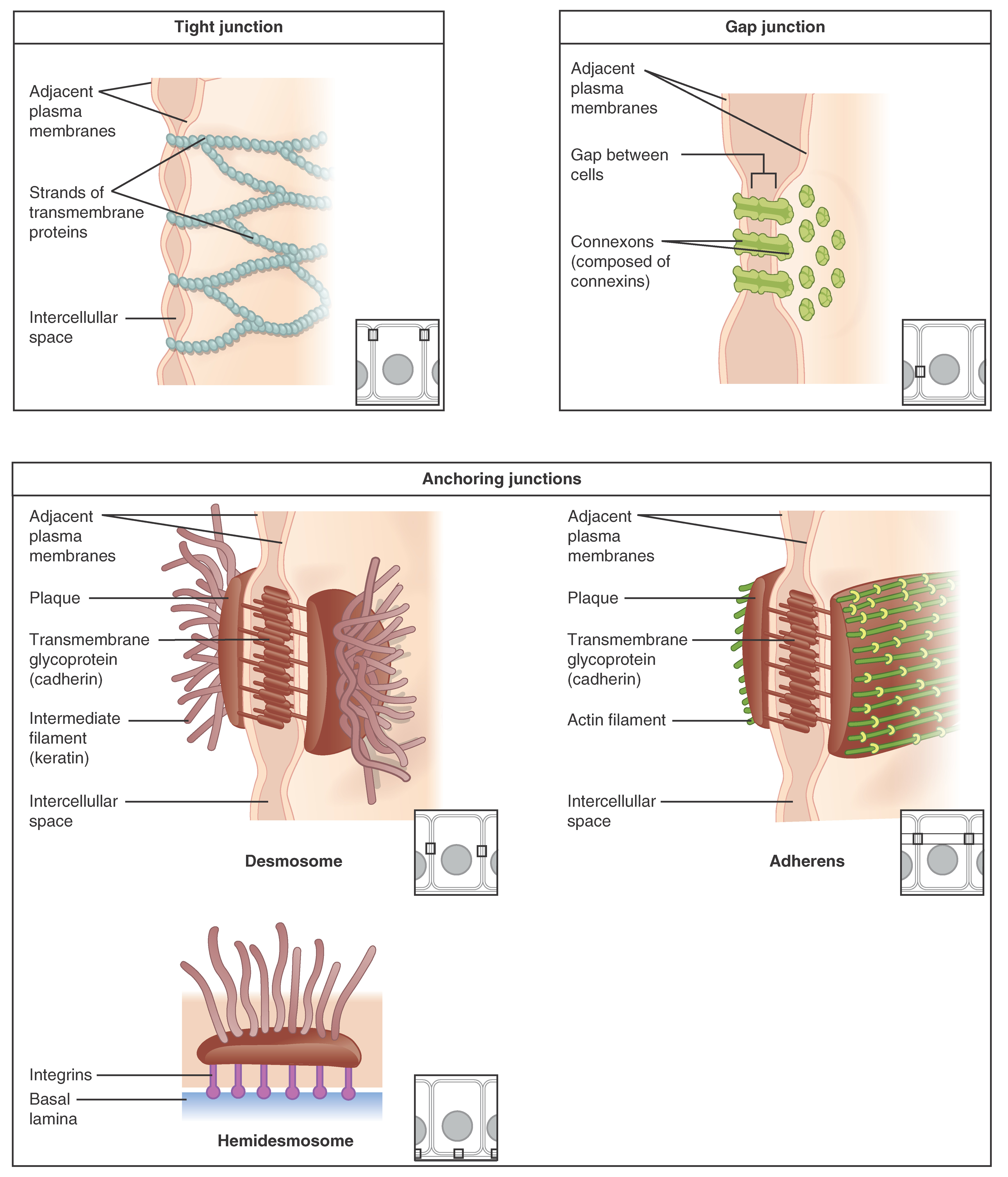 At one end of the spectrum is the tight junction, which separates the cells into apical and basal compartments. When two adjacent epithelial cells form a tight junction, there is no extracellular space between them and the movement of substances through the extracellular space between the cells is blocked. This enables the epithelia to act as selective barriers. An anchoring junction includes several types of cell junctions that help stabilize epithelial tissues. Anchoring junctions are common on the lateral and basal surfaces of cells where they provide strong and flexible connections. There are three types of anchoring junctions: desmosomes, hemidesmosomes, and adherens. Desmosomes occur in patches on the membranes of cells. The patches are structural proteins on the inner surface of the cell’s membrane. The adhesion molecule, cadherin, is embedded in these patches and projects through the cell membrane to link with the cadherin molecules of adjacent cells. These connections are especially important in holding cells together. Hemidesmosomes, which look like half a desmosome, link cells to the extracellular matrix, for example, the basal lamina. While similar in appearance to desmosomes, they include the adhesion proteins called integrins rather than cadherins. Adherens junctions use either cadherins or integrins depending on whether they are linking to other cells or matrix. The junctions are characterized by the presence of the contractile protein actin located on the cytoplasmic surface of the cell membrane. The actin can connect isolated patches or form a belt-like structure inside the cell. These junctions influence the shape and folding of the epithelial tissue.

Epithelial tissues are classified according to the shape of the cells and number of the cell layers formed (Figure 4.6). Cell shapes can be squamous (flattened and thin), cuboidal (boxy, as wide as it is tall), or columnar (rectangular, taller than it is wide). Similarly, the number of cell layers in the tissue can be one—where every cell rests on the basal lamina—which is a simple epithelium, or more than one, which is a stratified epithelium and only the basal layer of cells rests on the basal lamina. Pseudostratified (pseudo- = “false”) describes tissue with a single layer of irregularly shaped cells that give the appearance of more than one layer. Transitional describes a form of specialized stratified epithelium in which the shape of the cells can vary. Figure 4.7 Goblet Cell (a) In the lining of the small intestine, columnar epithelium cells are interspersed with goblet cells. (b) The arrows in this micrograph point to the mucous-secreting goblet cells. LM × 1600. (Micrograph provided by the Regents of University of Michigan Medical School © 2012) Watch this video to find out more about the anatomy of epithelial tissues. Where in the body would one find non-keratinizing stratified squamous epithelium?

A gland is a structure made up of one or more cells modified to synthesize and secrete chemical substances. Most glands consist of groups of epithelial cells. A gland can be classified as an endocrine gland, a ductless gland that releases secretions directly into surrounding tissues and fluids (endo- = “inside”), or an exocrine gland whose secretions leave through a duct that opens directly, or indirectly, to the external environment (exo- = “outside”).

The secretions of endocrine glands are called hormones. Hormones are released into the interstitial fluid, diffused into the bloodstream, and delivered to targets, in other words, cells that have receptors to bind the hormones. The endocrine system is part of a major regulatory system coordinating the regulation and integration of body responses. A few examples of endocrine glands include the anterior pituitary, thymus, adrenal cortex, and gonads.

Exocrine glands release their contents through a duct that leads to the epithelial surface. Mucous, sweat, saliva, and breast milk are all examples of secretions from exocrine glands. They are all discharged through tubular ducts. Secretions into the lumen of the gastrointestinal tract, technically outside of the body, are of the exocrine category.

Exocrine glands are classified as either unicellular or multicellular. The unicellular glands are scattered single cells, such as goblet cells, found in the mucous membranes of the small and large intestine.

The multicellular exocrine glands known as serous glands develop from simple epithelium to form a secretory surface that secretes directly into an inner cavity. These glands line the internal cavities of the abdomen and chest and release their secretions directly into the cavities. Other multicellular exocrine glands release their contents through a tubular duct. The duct is single in a simple gland but in compound glands is divided into one or more branches (Figure 4.9). In tubular glands, the ducts can be straight or coiled, whereas tubes that form pockets are alveolar (acinar), such as the exocrine portion of the pancreas. Combinations of tubes and pockets are known as tubuloalveolar (tubuloacinar) compound glands. In a branched gland, a duct is connected to more than one secretory group of cells. Figure 4.9 Types of Exocrine Glands Exocrine glands are classified by their structure.

Methods and Types of Secretion

Exocrine glands can be classified by their mode of secretion and the nature of the substances released, as well as by the structure of the glands and shape of ducts (Figure 4.10). Merocrine secretion is the most common type of exocrine secretion. The secretions are enclosed in vesicles that move to the apical surface of the cell where the contents are released by exocytosis. For example, watery mucous containing the glycoprotein mucin, a lubricant that offers some pathogen protection is a merocrine secretion. The eccrine glands that produce and secrete sweat are another example. Apocrine secretion accumulates near the apical portion of the cell. That portion of the cell and its secretory contents pinch off from the cell and are released. Apocrine sweat glands in the axillary and genital areas release fatty secretions that local bacteria break down; this causes body odor. Both merocrine and apocrine glands continue to produce and secrete their contents with little damage caused to the cell because the nucleus and golgi regions remain intact after secretion.

In contrast, the process of holocrine secretion involves the rupture and destruction of the entire gland cell. The cell accumulates its secretory products and releases them only when it bursts. New gland cells differentiate from cells in the surrounding tissue to replace those lost by secretion. The sebaceous glands that produce the oils on the skin and hair are holocrine glands/cells (Figure 4.11). Figure 4.11 Sebaceous Glands These glands secrete oils that lubricate and protect the skin. They are holocrine glands and they are destroyed after releasing their contents. New glandular cells form to replace the cells that are lost. LM × 400. (Micrograph provided by the Regents of University of Michigan Medical School © 2012)