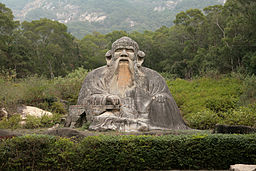 One of the values of Daoism is the concept of Wu Wei. A simple translation of this might be “go with the flow”, but this is not quite enough to really describe wu wei. The literal meaning of wu wei is “without action”, “without effort”, or “without control”, and is often included in the paradox wei wu wei: “action without action” or “effortless doing”.

To Live Our Lives Like Water from Parker Palmer[1] talks about Daoism and how people can find this concept of Wu Wei in their living.

All in the world deem the beautiful to be beautiful; it is ugly. All deem the
good to be good; it is bad.

Therefore the sage dwells in the midst of non-action (wuwei) and practices
the wordless teaching.
Herein arise the things of the world, it does not turn from them; what it gives
birth to it does not possess; what it does it does not retain. The
achievements complete, it makes no claim to them. Because it makes
no claim to them, they never leave it.

One on tiptoe cannot stand; one whose legs are spread cannot walk.
One who shows himself cannot be bright; one who asserts himself cannot
shone; one who praises himself can be meritorious; one who boasts of
himself cannot endure.
For the Dao, these are called “excess store and superfluous acts.” Things
detest them; therefore, the man of the Dao does not abide in them.

The Dao gives birth to them, virtue (de) rears them, things give them form,
circumstances complete them.
Thus all things in the world revere Dao and honor virtue. That the Dao is
revered and virtue honored is ordained by no one; it is ever so of itself.
Thus the Dao gives birth to them and virtue rears them – fosters them,
nurtures them, settles them, completes them, nourishes them, covers them.

To live but not possess, to act but depend on nothing, to lead without
directing, this is called mysterious virtue.

Nothing in the world is more weak and soft than water, yet nothing surpasses
it in conquering the hard and strong – there is nothing that can
compare.
All know that the weak conquers the strong and the soft conquers the hard.
But none are able to act on this.
Thus the sage says that he who receives the derision of the state is the lord of
the state altars; he who receives the misfortune of the state is the king
of the world.
Straight words seem to reverse themselves. © 2010, 2016 Robert Eno
This online translation is made freely available for use in not-for-profit educational settings and for personal use.
For other purposes, apart from fair use, copyright is not waived.