A rest stands for a silence in music. For each kind of note, there is a written rest of the same length.

The Most Common Rests

For each note on the first line, write a rest of the same length on the second line. The first measure is done for you.

Rests don't necessarily mean that there is silence in the music at that point; only that that part is silent. Often, on a staff with multiple parts, a rest must be used as a placeholder for one of the parts, even if a single person is playing both parts. When the rhythms are complex, this is necessary to make the rhythm in each part clear.

Figure 4: When multiple simultaneous rhythms are written on the same staff, rests may be used to clarify individual rhythms, even if another rhythm contains notes at that point.

The normal rule in common notation is that, for any line of music, the notes and rests in each measure must "add up" to exactly the amount in the time signature, no more and no less. For example, in 3/4 time, a measure can have any combination of notes and rests that is the same length as three quarter notes. There is only one common exception to this rule. As a simplifying shorthand, a completely silent measure can simply have a whole rest. In this case, "whole rest" does not necessarily mean "rest for the same length of time as a whole note"; it means "rest for the entire measure". 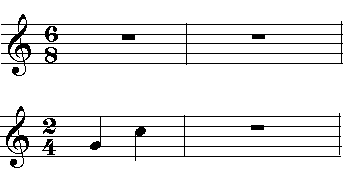 Figure 5: A whole rest may be used to indicate a completely silent measure, no matter what the actual length of the measure will be.