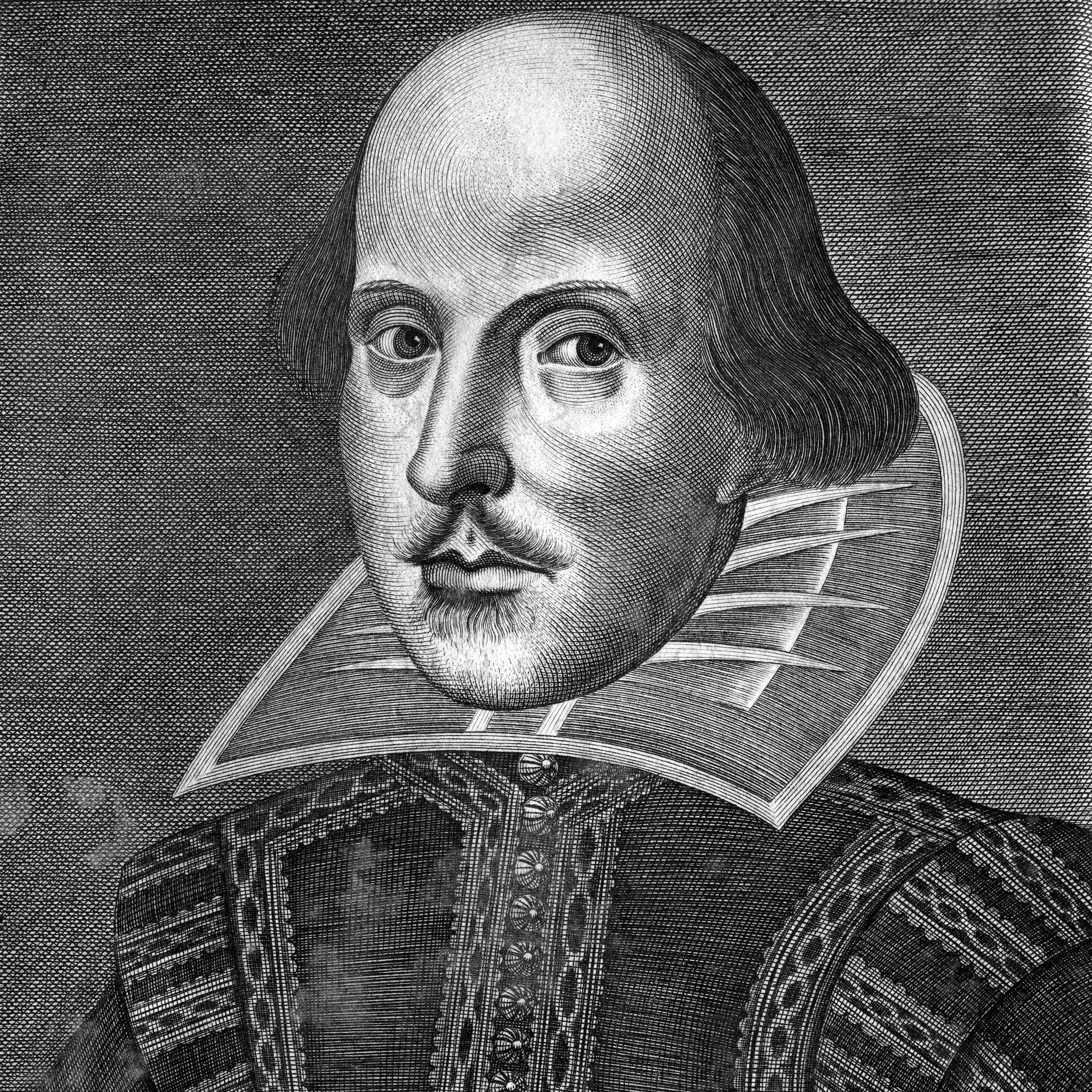 This engraving of Shakespeare by Martin Droeshout appeared in Shakespeare's first published folio in 1623. It is in the public domain.

Since William Shakespeare lived more than 400 years ago, and many records from that time are lost or never existed in the first place, we don't know everything about his life. For example, we know that he was baptized in Stratford-upon-Avon, 100 miles northwest of London, on April 26, 1564. But we don't know his exact birthdate, which must have been a few days earlier.

We do know that Shakespeare's life revolved around two locations: Stratford and London. He grew up, had a family, and bought property in Stratford, but he worked in London, the center of English theater. As an actor, a playwright, and a partner in a leading acting company, he became both prosperous and well-known. Even without knowing everything about his life, fans of Shakespeare have imagined and reimagined him according to their own tastes.

William Shakespeare was probably born on about April 23, 1564, the date that is traditionally given for his birth. He was John and Mary Shakespeare's oldest surviving child; their first two children, both girls, did not live beyond infancy. Growing up as the big brother of the family, William had three younger brothers, Gilbert, Richard, and Edmund, and two younger sisters: Anne, who died at seven, and Joan.

Their father, John Shakespeare, was a leatherworker who specialized in the soft white leather used for gloves and similar items. A prosperous businessman, he married Mary Arden, of the prominent Arden family. John rose through local offices in Stratford, becoming an alderman and eventually, when William was five, the town bailiff—much like a mayor. Not long after that, however, John Shakespeare stepped back from public life; we don't know why.

Shakespeare, as the son of a leading Stratford citizen, almost certainly attended Stratford's grammar school. Like all such schools, its curriculum consisted of an intense emphasis on the Latin classics, including memorization, writing, and acting classic Latin plays. Shakespeare most likely attended until about age 15.

A few years after he left school, in late 1582, William Shakespeare married Anne Hathaway. She was already expecting their first-born child, Susanna, which was a fairly common situation at the time. When they married, Anne was 26 and William was 18. Anne grew up just outside Stratford in the village of Shottery. After marrying, she spent the rest of her life in Stratford.

In early 1585, the couple had twins, Judith and Hamnet, completing the family (interestingly, Hamnet is one letter away from being Hamlet). In the years ahead, Anne and the children lived in Stratford while Shakespeare worked in London, although we don't know when he moved there. Some later observers have suggested that this separation, and the couple's relatively few children, were signs of a strained marriage, but we do not know that, either. Someone pursuing a theater career had no choice but to work in London, and many branches of the Shakespeares had small families.

Shakespeare's only son, Hamnet, died in 1596 at the age of 11. His older daughter Susanna later married a well-to-do Stratford doctor, John Hall. Their daughter Elizabeth, Shakespeare's first grandchild, was born in 1608. In 1616, just months before his death, Shakespeare's daughter Judith married Thomas Quiney, a Stratford vintner. The family subsequently died out, leaving no direct descendants of Shakespeare.

For several years after Judith and Hamnet's arrival in 1585, nothing is known for certain of Shakespeare's activities: how he earned a living, when he moved from Stratford, or how he got his start in the theater.

Following this gap in the record, the first definite mention of Shakespeare is in 1592 as an established London actor and playwright, mocked by a contemporary as a "Shake-scene." The same writer alludes to one of Shakespeare's earliest history plays, Henry VI, Part 3, which must already have been performed. The next year, in 1593, Shakespeare published a long poem, Venus and Adonis. The first quarto editions of his early plays appeared in 1594. For more than two decades, Shakespeare had multiple roles in the London theater as an actor, playwright, and, in time, a business partner in a major acting company, the Lord Chamberlain's Men (renamed the King's Men in 1603). Over the years, he became steadily more famous in the London theater world; his name, which was not even listed on the first quartos of his plays, became a regular feature—clearly a selling point—on later title pages.

Shakespeare prospered financially from his partnership in the Lord Chamberlain's Men (later the King's Men), as well as from his writing and acting. He invested much of his wealth in real-estate purchases in Stratford and bought the second-largest house in town, New Place, in 1597.

Among the last plays that Shakespeare worked on was The Two Noble Kinsmen, which he wrote with a frequent collaborator, John Fletcher, most likely in 1613. He died on April 23, 1616—the traditional date of his birthday, though his precise birthdate is unknown. We also do not know the cause of his death. His brother-in-law had died a week earlier, which could imply infectious disease, but Shakespeare's health may have had a longer decline.

The memorial bust of Shakespeare at Holy Trinity Church in Stratford is considered one of two authentic likenesses, because it was approved by people who knew him. (The bust in the Folger's Paster Reading Room, shown at left, is a copy of this statue.) The other such likeness is the engraving by Martin Droeshout in the 1623 First Folio edition of Shakespeare's plays, produced seven years after his death by his friends and colleagues from the King's Men.

While Shakespeare's life may seem distant or like we cannot relate to it, and his writing may be difficult to understand, the reality is that his writing has endured the ages because it is not as different as it first seems. In fact, there are a surprising number of similarities between Shakespeare's life and work and our modern understandings of the world. Check out the video below to learn more.

In the video above, rapper Akala discusses the similarities between Shakespeare and hip-hop. Click on the video to enable closed-captioning options.