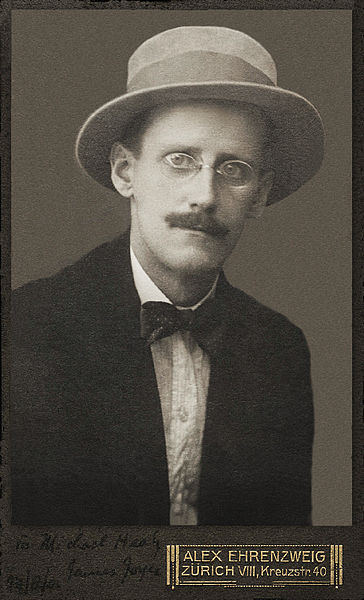 James Joyce was born in Dublin, Ireland, on February 2, 1882, the eldest of 10 surviving children. He was educated by Jesuits at Clongowes Wood College and Belvedere College before going on to University College, then located on St Stephen’s Green in Dublin, where he studied modern languages.

After he graduated from university, Joyce went to Paris, ostensibly to study medicine, and was recalled to Dublin in April 1903 because of the illness and subsequent death of his mother. He stayed in Ireland until 1904, and in June that year he met Nora Barncale, the Galway woman who was to become his partner and later his wife.

In August 1904, the first of Joyce’s short stories was published in the Irish Homestead magazine, which later published two others. In October of that year, Joyce and Nora left Ireland going first to Pola (now Pula, Croatia) where Joyce got a job teaching English at a Berlitz school. Joyce returned to Ireland only four times in his life, the last visit being in 1912, after which he never returned again.

Six months after their arrival in Pola, James and Nola moved to Trieste, Italy, where they spent most of the next 10 years. While there, they learned the local Triestino dialect, and Italian remained the family’s home language for many years. Joyce wrote and published articles in Italian in the Piccolo della Sera newspaper and gave lectures on English literature. A portrait of Nora was painted by the Italian artist Tullio Silvestri in Trieste just before World War I. The James Joyce Centre in Dublin has on display a reproduction of this portrait.

The year 1914 proved a crucial one for Joyce. With Ezra Pound’s assistance, A Portrait of the Artist as a Young Man, Joyce’s first novel, appeared in serial form in Harriet Weaver’s Egoist magazine in London. His collection of short stories, Dubliners, on which he had been working since 1904, was finally published, and he also wrote his only play, Exiles. Having cleared his desk, Joyce could then start in earnest on the novel he had been thinking about since 1907: Ulysses.

With the start of World War I, Joyce and Nora, along with their two children, Giorgio and Lucia, were forced to leave Trieste. They moved to Zurich, Switzerland, where they lived for the duration of the war. The family had little money, relying on subventions from friends and family, people like Harriet Weaver in London, and Nora’s uncle in Galway. They often ended up living in cramped, squalid accommodation as Joyce persisted in writing Ulysses. In fact, Joyce never really had a room or an office of his own in which to do his writing, and far from trying to block out the world around him while he wrote, Joyce included things going on around him as part of the book. Characteristics of his friends, Trieste, Zurich, and Paris are given to characters in the book, and, most notably, Nora’s language and writing style become the voice of Molly Bloom in the novel.

Though Joyce wanted to settle in Trieste again after the war, the poet Ezra Pound persuaded him to come to Paris for a while, and Joyce stayed for the next 20 years. The publication of Ulysses in serial form in the American journal The Little Review was brought to a halt in 1921 when a court banned it as obscene. Shortly after, Harriet Weaver ran out of printers willing to set the text in England, and for a while it looked as though Ulysses would never be published.

In July 1920, Joyce met Sylvia Beach, an American expatriate living in Paris who owned and ran the bookshop Shakespeare & Co. In 1921, Beach offered to publish Ulysses and finally, on February 2, 1922, Joyce’s 40th birthday, the first edition of the book was published. Beach continued to publish Ulysses through 1930.

After Beach gave up the rights to Ulysses, much of Joyce’s business was taken over by Paul Léon, a Russian Jewish émigré living in Paris. As a close friend of Joyce and Joyce’s family, Léon also became Joyce’s business advisor, looking after his correspondence and dealing with his literary and legal affairs. The Léons’ apartment became a centre for Joyce studies, and Léon and others met Joyce there to discuss translations of Ulysses and the early serial publications of what became Finnegans Wake.

For the next 10 years, Joyce and Léon were in almost daily contact, and Léon came to assume a role as necessary and important to Joyce and his work as Sylvia Beach had played in the 1920s. Not only did he manage Joyce’s legal, financial, and daily existence, much as Beach had during the years she published Ulysses, Léon played an essential part in the composition and proofreading of Joyce’s last work and perhaps most challenging work, Finnegans Wake, which was published on May 4, 1939. It was immediately listed as “the book of the week” in the United Kingdom and the United States.

In 1940, when Joyce fled to the south of France ahead of the Nazi invasion, Léon returned to the Joyces’ apartment in Paris to salvage their belongings and put them into safekeeping for the duration of the war, and it’s thanks to Léon’s efforts that much of Joyce’s personal possessions and manuscripts survived.

For a useful introduction to Dubliners and a detailed biography of Joyce, see http://www.mendele.com/WWD/WWD.dubintro.html