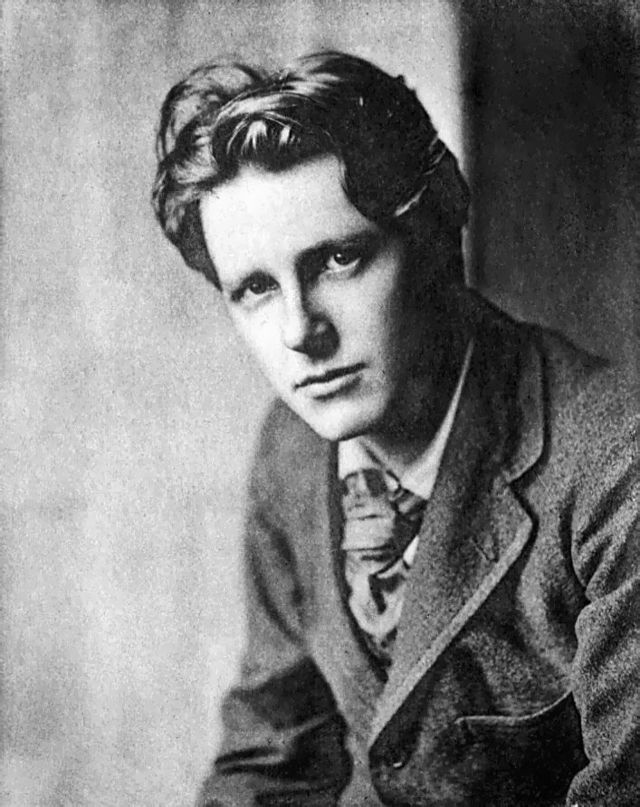 English poet Rupert Chawner Brooke was born on August 3, 1887. The son of Rugby School’s housemaster, Brooke excelled in both academics and athletics. He entered his father’s school at the age of 14. A lover of verse since the age of nine, he won the school poetry prize in 1905.

A year later, he attended King’s College, Cambridge, where he was known for his striking good looks, charm, and intellect. While at Cambridge, he developed an interest in acting and was president of the University Fabian Society. Brooke published his first poems in 1909; his first book, Poems, appeared in 1911. While working on his dissertation on John Webster and Elizabethan dramatists, he lived in the house that he made famous by his poem “The Old Vicarage, Grantchester.”

Popular in both literary and political circles, he befriended Winston Churchill, Henry James, and members of the Bloomsbury Group, including Virginia Woolf. Although he was popular, Brooke had a troubled love life. Between 1908 and 1912, he fell in love with three women: Noel Olivier, youngest daughter of the governor of Jamaica; Ka Cox, who preceded him as president of the Fabian Society; and Cathleen Nesbitt, a British actress. None of the relationships were long lasting. In 1912, after his third romance failed, Brooke left England to travel in France and Germany for several months.

Upon his return to England, Brooke received a fellowship at King’s College and spent time in both Cambridge and London. In 1912, he compiled an anthology entitled Georgian Poetry, 1911-12, with Edward Marsh. The Georgian poets wrote in an anti-Victorian style, using rustic themes and subjects such as friendship and love. While critics viewed Brooke’s poetry as too sentimental and lacking depth, they also considered his work a reflection of the mood in England during the years leading up to World War I.

After experiencing a mental breakdown in 1913, Brooke travelled again, spending several months in the United States, Canada, and the South Seas. During his trip, he wrote essays about his impressions for the Westminster Gazette, which were collected in Letters from America (1916). While in the South Seas, he wrote some of his best poems, including “Tiare Tahiti” and “The Great Lover.”

He returned to England at the outbreak of World War I and enlisted in the Royal Naval Division. His most famous work, the sonnet sequence 1914 and Other Poems, appeared in 1915. On April 23, 1915, after taking part in the Antwerp Expedition, he died of blood poisoning from a mosquito bite while en route to Gallipoli with the navy. He was buried on the island of Skyros in the Aegean Sea.

Following his death, Brooke, who was already famous, became a symbol in England of the tragic loss of talented youth during the war.