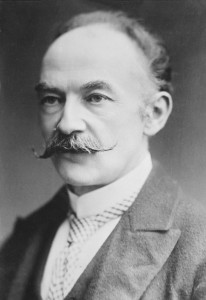 Thomas Hardy, the son of a stonemason, was born in Dorset, England, on June 2, 1840. He trained as an architect and worked in London and Dorset for 10 years. Hardy began his writing career as a novelist, publishing Desperate Remedies in 1871, and was soon successful enough to leave the field of architecture for writing. His novels Tess of the D’Urbervilles (1891) and Jude the Obscure (1895), which are considered literary classics today, received negative reviews upon publication, and Hardy was criticized for being too pessimistic and preoccupied with sex. He left fiction writing for poetry and published eight collections, including Wessex Poems (1898) and Satires of Circumstance (1912).

Hardy’s poetry explores a fatalist outlook against the dark, rugged landscape of his native Dorset. He rejected the Victorian belief of a benevolent God, and much of his poetry reads as a sardonic lament on the bleakness of the human condition. A traditionalist in technique, he nevertheless forged a highly original style, combining rough-hewn rhythms and colloquial diction with an extraordinary variety of meters and stanzaic forms. He was a significant influence on later poets (including Robert Frost, W. H. Auden, Dylan Thomas, and Philip Larkin), and that influence increased during the course of the 20th century, offering an alternative—more down-to-earth, less rhetorical—to the more mystical and aristocratic precedent of Yeats. Thomas Hardy died on January 11, 1928.