Who in the U.S. could tell if a man sitting in a coffeeshop was Native American? At the comic book store, the two young women who were obviously into each other – who could tell they were Diné? Who would even know the Diné was another name for the Navajo Native American tribe, or consider the fact that Native Americans might be active members of society beyond casinos and reservations?

Why Barrie, who wrote the story as a play in 1904, chose a racial slur for dark-skinned children of African descent to name her tribe is telling. And Disney’s depiction of Tiger Lily 50 years after Barrie wrote the original play is even more so.

“That feather in the headband, a feather sticking out,” Yazzie says. “I don’t know any tribe who wears feathers like that, especially in our ancestral stories.” Sixty years after the Disney film’s release, Tiger Lily still wasn’t right and was played by Rooney Mara in the 2015 film Pan. (Most Native American characters have been played by white actors in Hollywood films).

This flippant and racist disregard to accuracy is typical of Native American stereotypes propagated by U.S. history, pop culture and mass media. The Native American is either the noble savage, the bloodthirsty savage, the despairing Indian on a reservation or simply invisible.

“There were always these stereotypes of what a Native American was, and it was always a bad guy,” says Yazzie, who devoured comics in her youth growing up on the Diné reservation in Tse Si Ani, also known as Lupton, Arizona. Known for its magnificent sandstone cliffs, the small town straddles the border between New Mexico and Arizona. “I just don’t like those types of characters, and they’re all men too,” she adds.

Decades older than Yazzie, writer Sherman Alexie of the Spokane-Coeur d’Alene tribe felt the same. In his 1998 Los Angeles Times essay “I Hated Tonto (Still Do),” he wrote: “In the movies, Indians are always accompanied by ominous music. And I’ve seen so many Indian movies that I feel like I’m constantly accompanied by ominous music. I always feel that something bad is about to happen.” 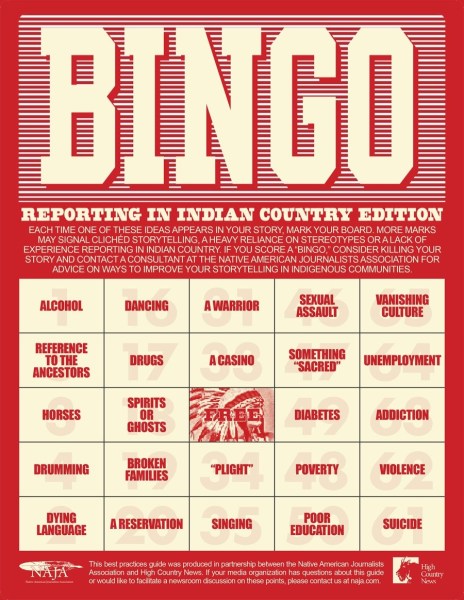 To raise awareness among media about reporting Native American stories, Ahtone helped in the gamification of words to approach with caution. Photo courtesy of NAJA and High Country News

These stereotypes not only negatively affect Native Americans’ self-esteem, but they also radiate outward and influence institutions, such as mass media. Tristan Ahtone, a journalist and citizen of the Kiowa Nation, is exasperated by mainstream media’s sloppy and stereotypical coverage of issues involving Native Americans and Indigenous peoples worldwide.

“The point about challenging stereotypes about Native people is you just have to write about a real person,” he says. “It’s not that hard. It’s an incredibly low bar to write about somebody as a normal person, instead of, ‘Oh my God we’ve never seen anything like this!’ ”

Why has this status quo been living for so long? Ahtone thinks it stems from an avoidance that has deep racial roots. “When it comes to these sorts of colonial practices in the U.S., we’re incredibly inconvenient to have around,” he says. “U.S. history provides ample evidence of genocidal policies. So by having us around and talking about surviving, for instance, that’s a big issue.”

But while Alexie was coy about fighting stereotypes (“We Indians became so numb to the possibility of dissent,” he wrote), Ahtone and Yazzie are among many Native Americans unequivocally committed to changing their own narratives – and Native American narratives as a whole. Too Many Feathers for a Woman

When Yazzie was only 4 years old, she already knew she was different. “My parents knew it too. I always wanted to be with the boys and do things better than the boys,” she says. “Being gay and being a person of color – being Diné – it questions a lot of things.”

Of course, the inevitable happened. “I started competing against boys in powwows,” she recounts.

This was one of the first things Yazzie did to claim her narrative, and she did it despite being seen as disrespectful to their traditions. “People said to me, ‘You can’t dance in the boys’ category because you’re a girl.’ I have questioned that ever since.”

Yazzie was even bullied in the powwow circle. But because her parents were always supportive, she has danced in boys’ and now men’s’ powwows ever since. She has met several men who dance in the women’s category, and she’s seen other women dance in the men’s category. “I don’t know if they’re still doing it,” she says. “I hope they are.”

“But that was my interpretation of me stepping into gender,” she says. “I know there were women warriors, and there still are women warriors. They just face different wars, like domestic violence, rape, that kind of stuff.”

Over the past few years, Yazzie has added photojournalism to her storytelling tools. She has freelanced for Al Jazeera America, is currently finishing a journalism degree at the Metropolitan State University of Denver and will join High Country News as a photographer in July.

Yazzie is excited about a current project with a professor at Oklahoma State University. “She wants me to take photos of lesbians who have families,” Yazzie says. “I think it’s important because there is a lack of images of lesbian women, especially Diné or any other tribe, raising their own families.”

The project is close to Yazzie’s heart as she and her partner, who is part Diné, want to get married in a tribal ceremony. But, the Diné medicine men they have approached have all turned them away. Her desire for kids is difficult for her and her partner to imagine.

“I want to make [these images] more normal for other people, so they won’t look at [gay women] like that anymore,” Yazzie says. “Because even those little weird glances make you uncomfortable. It doesn’t make you feel that you’re a part of something. I want them to feel they are not alone, that there is a community for them.”

Every Space a Revolution

It’s been about six years since Ahtone left general news reporting and to focus primarily on tribal affairs and Indigenous stories. He has worked for news outlets including NPR, Al Jazeera America, PBS NewsHour, Frontline and National Native News and won a few awards for his work. Now an associate editor for tribal affairs at High Country News, Ahtone works hard at making space for Native American voices in the national conversation.

“There is no Indigenous voice in mainstream or legacy media,” Ahtone says. He feels these outlets just don’t hire enough Native reporters or editors, if they hire any at all. Their coverage of Indigenous issues also leaves much to be desired. “Some places will have a marijuana beat but they don’t have a beat covering the 567 tribal nations across the U.S.,” Ahtone says.

So, after several years of sticking it out in mainstream outlets, he left. He says, “It’s incredibly tiring to have to continue to try to convince an industry that prides itself on being very democratic and open to underrepresented voices that our voices matter.”

Ahtone was drawn to High Country News because they devoted resources and time to producing multi-faceted, high-quality coverage of Native Americans and their lands. Ahtone also worked for cable news channel Al Jazeera America, which was aiming to be the go-to network for underrepresented voices. Unfortunately it shut down in 2016 after only three years on the airwaves.

Most legacy outlets, Ahtone says, only want one-off reports or occasional ‘Indigenous Voices’ series. “These outlets routinely screw things up with Indigenous communities but also with most communities of color,” Ahtone says.

He attributes this to an underpinning concept of ownership: “The commodification of Native people – be it through land or through image – often plays a role in reporters thinking that they can do whatever they want in these communities.”

Ahtone thinks that journalists in legacy outlets might not even be conscious of this, and that this lack of self-awareness in turn keeps them from recognizing their reporting and correcting their behavior.

For Ahtone, publications such as The New York Times and Washington Post are most culpable as their influence and strong digital presence ensures they dominate news coverage and “take up a lot more space in the national conversation.”

As Ahtone digs into more investigative pieces for High Country News and builds his team of reporters and correspondents, he also keeps his eye on young Native American writers keen on becoming journalists.

Working with the Native American Journalists Association (NAJA), Ahtone and his colleagues advocate to get more Native people into newsrooms, “because Indigenous peoples holding space is revolutionary,” he says. “We need to be holding these spaces.

“If you’re at a tribal outlet, if you’re in a mainstream outlet, it doesn’t matter. We need your voice. No matter where you are, we want you there.”

The community of journalists such as himself might be small, but it is strong, he says. Experienced Native American journalists are eager to mentor those who are younger and equip future generations with the skills to continue changing the narrative.

“My hope is by starting to seed more people into news organizations early, with a different way of thinking, then in the future they will do a better job.”

Natasha Vizcarra is a science writer based in Boulder, Colorado. She is the editor of Sensing Our Planet: NASA Earth Science Research Features, a freelance writer, and the author of several children’s books.

Taking the Native American Narrative Beyond Reservations by Natasha Vizcarra is licensed under a Creative Commons Attribution-NonCommercial-ShareAlike 4.0 International License.