Many developments in the early part of the Scientific Revolution occurred in Catholic countries such as Italy, but over time the center of scientific development shifted north and west. While many Protestants, including Luther himself, were just as hostile as were Catholics to new scientific ideas at first, in the long term Protestant governments proved more tolerant of ideas that seemed to violate the literal truth of the Bible. This had less to do with some kind of inherent tolerance in Protestantism than to the fact that Protestant institutions were less powerful and pervasive than was the Roman church in Catholic countries.

In the Netherlands and England in particular it was possible to openly publish and/or champion scientific ideas without fear of a backlash; in the case of Newton, it was possible to be outright famous. In general, Protestant governments and elites were more open to the idea that God might reveal Himself in nature itself, not just in holy scripture, and thus they were sympathetic to the piety of scientific research. Ultimately, this increased tolerance and support of science would see the center of scientific innovation in the northwest of Europe, not in the heart of the earlier Renaissance in Italy.

That being noted, France was not to be underestimated as a site of discovery, due in part to the cosmopolitanism of Paris and the traditional power of the French kings in holding the papacy at arm’s length. The Royal Academy of Sciences in France was opened in the same year as its sister organization, the Royal Society, in England (1662). Both funded scientific efforts that were “useful” in the sense of serving shipping and military applications as well as those which were more purely experimental, as in astronomy. The English Royal Society was particularly focused on military applications, especially optics and ballistics, setting a pattern of state-funded science in the service of war that continues to this day.

The English and French scientific societies were important parts of the development of a larger “Republic of Science,” the predecessor to present-day “academia.” Learned men (and some women) from all over Europe attended lectures, corresponded, and carried out their own scientific experiments. Newton was the president of the Royal Society, which published Philosophical Transactions of the Royal Society, the forerunner to academic journals that remain the backbone of scholarship today. 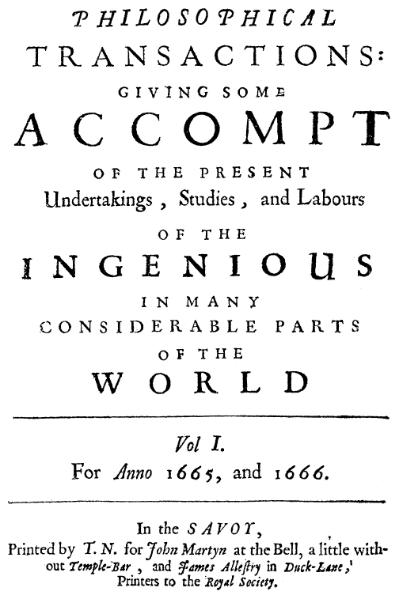 Figure 12.6.1: The cover of the first volume of the Philosophical Transactions, arguably the first formal academic journal in history.

The importance of the Republic of Science cannot be overstated, because the ongoing exchange of ideas and fact-checking among experts allowed science to progress incrementally and continually. In other words, no scientist had to "start from scratch," because he or she was already building on the work of past scholars. Rather than science requiring an isolated genius like Da Vinci, now any intelligent and self-disciplined individual could hope to make a meaningful contribution to a scientific field. Newton explicitly acknowledged the importance of this incremental growth of knowledge when he emphasized that “If I have seen further it is by standing on the shoulders of giants.”

The Republic of Science also inaugurated a shift away from the use of Latin as the official language of scholarship in learned European culture. Scientific essays were often written in the vernacular by scientists like Kepler and Galileo in part because they wanted to differentiate their work from church doctrine (which, of course, was traditionally written in Latin). Newton initially wrote in Latin so that it could be read by his peers on the continent, but his later works were in English. Over the course of the eighteenth century, Latin steadily declined as the practical language of learning, replaced by the major vernaculars, especially French and English.