It finally came to war in September of 1939. The Nazis claimed that Poles had been abusing and mistreating ethnic Germans in Poland, and Nazi propagandists fabricated a number of supposed atrocities that had been perpetrated against Germans. Using this excuse, the German army invaded in September. France and Britain finally had to face the hard truth that there was no appeasing Hitler, and they declared war on Germany. As part of the pre-war agreement with Germany, the Soviet Union invaded Poland from the east as German forces invaded from the west, with the Soviets occupying eastern Poland in the name of both territorial expansion for its own sake and to provide a buffer from Germany and the west.

The most important lesson German strategists had learned from World War I was how to overcome trench warfare. After years of stalemate, Germany had managed to break through the French and British lines on the western front right at the end of the war, before they were pushed back by the flood of American troops. Military technology advanced rapidly between the wars, equipping each of the major nations with fast-moving, heavily armored tanks and heavy bombers supported by fighter planes. It would be possible to strike much more quickly and much harder than had the ragged lines of charging soldiers “going over the top” twenty years earlier.

Likewise, as American intervention had proved in World War I, all of the combatants in the Second World War recognized the key role of industrial production itself. The winner in war would be not only the side that struck first and hardest, but the side that could continue to churn out weapons and equipment at the highest rates for the longest time. In that sense, industrial capacity was as important as fighting ability. German strategists had learned all of these lessons, and the German army - the Wehrmacht - struck with overwhelming force, backed by an industrial base designed to support a lengthy war.

When Germany finally attacked Poland in September of 1939, the Wehrmacht unleashed (what the Allies called) Blitzkrieg, lightning war, which consisted of fast-moving armored divisions supported by overwhelming air support. Behind those armored divisions the main body of German infantry neutralized remaining resistance and, typically, succeeded in taking thousands (sometimes hundreds of thousands) of prisoners of war. Blitzkrieg had originally been conceived by a French officer, Charles de Gaulle, in a military tactical plan regarding mobile warfare. It was rejected by the French General Staff but was acquired by the Germans and implemented by the Wehrmacht. (The irony is that De Gaulle would go on to become the leader of the anti-Nazi Free French forces in the war after France itself surrendered).

The first stage of the war resulted in complete German victory. The Polish army put up a valiant defense but was swiftly crushed. Over 1,300 planes attacked Poland at once in the early stage of the invasion, and Poland capitulated in October, with its government fleeing to exile in London. While the smaller nations in the region warily watched their own borders, most global attention shifted to the border with France, the obvious next stage in the plans for German conquest.

While France had declared war on Germany immediately in September of 1939, it did not actually attack. French plans for a future war with Germany had revolved around defense, meaning awaiting a German attack, since the end of World War I. After WWI, the French built a huge series of bunkers and fortresses along the French - German border known as the Maginot Line. There, from September of 1939 until May of 1940, the French military essentially waited for Germany to invade - this was a period the French came to refer to as the "drôle de guerre,” or “joke war” (the British called it the “phony war,” the Germans sitzkrieg or “sitting war”). The assumption had been that Germany would be held back by the heavy fortifications and could be pushed back, and the French army simply did not have any plans, or intentions, to attack Germany in the meantime.

Instead, the Germans had the (in hindsight, not entirely surprising) idea to go around the Maginot Line. In April, German forces invaded and swiftly defeated Denmark and Norway, despite a valiant resistance by the Norwegians. Then, on the 10th of May, they attacked the Netherlands, Belgium, and France, sending the bulk of their forces through a forest on the French - Belgian border that the French had, wrongly, thought was impassable to an army. The Germans proved far more effective than the French or British at using tanks and artillery, and they immediately began driving the French and British forces back. The Maginot Line, meanwhile, went unused, with the German invasion simply bypassing it completely with the Belgian invasion.

An infamous incident occurred in late May, when over 300,000 British and French soldiers retreating from the Germans were pinned down on the coast of the English Channel near the French town of Dunkirk. There, a flotilla of navy and fishing vessels managed to evacuate them back to England while the British Royal Air Force held off the opposing German Luftwaffe (air force). This retreat counted as a success by the standards of the Allies at the time, although the British Prime Minister Winston Churchill reminded his countrymen that successful retreats were not how wars were won.

The defeat of France and its allied British Expeditionary Force is, in hindsight, all the more disappointing in that the combined Allied forces were more numerous than their German enemies and could have, conceivably, put up a stiff fight. Instead, the French sent their armored forces toward Holland while the Germans smashed into France itself, the British and French proved inept at working together, and Allied morale collapsed completely. The French in particular did not realize the potential of tank warfare: they treated tanks more as mobile artillery platforms than as weapons in their own right, and they had no armored divisions, just tanks interspersed with infantry divisions.

In the end, France surrendered to Germany on June 22. Germany occupied the central and northern parts of France but allowed a group of right-wing French politicians and generals to create a Nazi-allied puppet state in the south. That state became known as the Vichy Regime, named after the spa town of Vichy that served as its capital. There, the Vichy government rapidly set up a distinctly French fascist state, complete with concentration camps, anti-Semitic laws, and a state of war with Britain.

Thus, as of June of 1940, no major powers remained to oppose Germany but Britain (the United States, while far more favorable to Britain than Germany, remained neutral). Hitler had initially hoped that the British would agree to surrender the continent and negotiate while he consolidated his victory (and turned against the USSR). Instead, Britain refused to back down and handed over power to an emergency government headed by the new prime minister, Winston Churchill. Starting in July of 1940, the Luftwaffe began a campaign to utterly destroy the Royal Air Force (RAF) of Britain and to terrify the British into surrendering. German plans revolved around a naval invasion of the British Isles across the English Channel, but German strategists conceded that they would have to cripple the RAF for the invasion to be possible. The resulting months of combat in the skies came to be known as The Battle of Britain. It was the “greatest” series of air battles ever fought, lasting from July through September of 1940, with thousands of planes battling in the skies every day and night.

The British were quite well prepared. They had the newly-created technology of radar, which allowed them to anticipate German attacks. In addition to the RAF, the British had numerous batteries of anti-aircraft guns that inflicted significant losses on the Luftwaffe. Many British pilots survived crashes and were rescued, whereas German pilots who were shot down either died or were captured. Most importantly, British factories churned out twice as many new planes as did German ones over the course of the war. Thus, the RAF was able to counter German attacks with new, effective fighters and increasingly seasoned pilots. By the end of September, much to Hitler’s fury, Germany had to abandon the immediate goal of invading Britain.

Meanwhile, the United States stayed out of the war – “isolationism” was still a very popular stance among many Americans. In part because of the heroism of the British defense, however, the American Congress passed the Lend-Lease Act in March of 1941 which authorized unlimited support for Britain, mostly taking the form of food and military supplies provided on credit, “short of war.” Britain relied both on American supplies and complete governmental control of its own economy to survive in the coming years. With German blockades preventing the importation of anywhere near the pre-war amounts of food, every aspect of the British economy (especially agriculture and other forms of food production) was directed by emergency wartime ministries to keep the British population from starving.

The specific decision by Hitler and the Nazi leadership that resulted in the United States joining the Allies was the alliance between Germany and Japan. In September of 1941, Germany, Italy, and Japan signed the Tripartite Pact. The Pact stipulated that any of the three powers would declare war on a neutral country that declared war on one of the others. Practically speaking, Germany hoped that the Pact would make American politicians think twice about joining Britain in the war effort. In hindsight, it backfired against Germany, since the Japanese attack on the United States led Germany to honor its agreement and declare war on the US as well: Japan attacked Pearl Harbor in Hawaii on December 7, 1941, and Germany was obliged to declare war on the US (Hitler was urged not to by his advisors, but gleefully claimed that Japan had never lost a war and now victory was assured for the Axis). 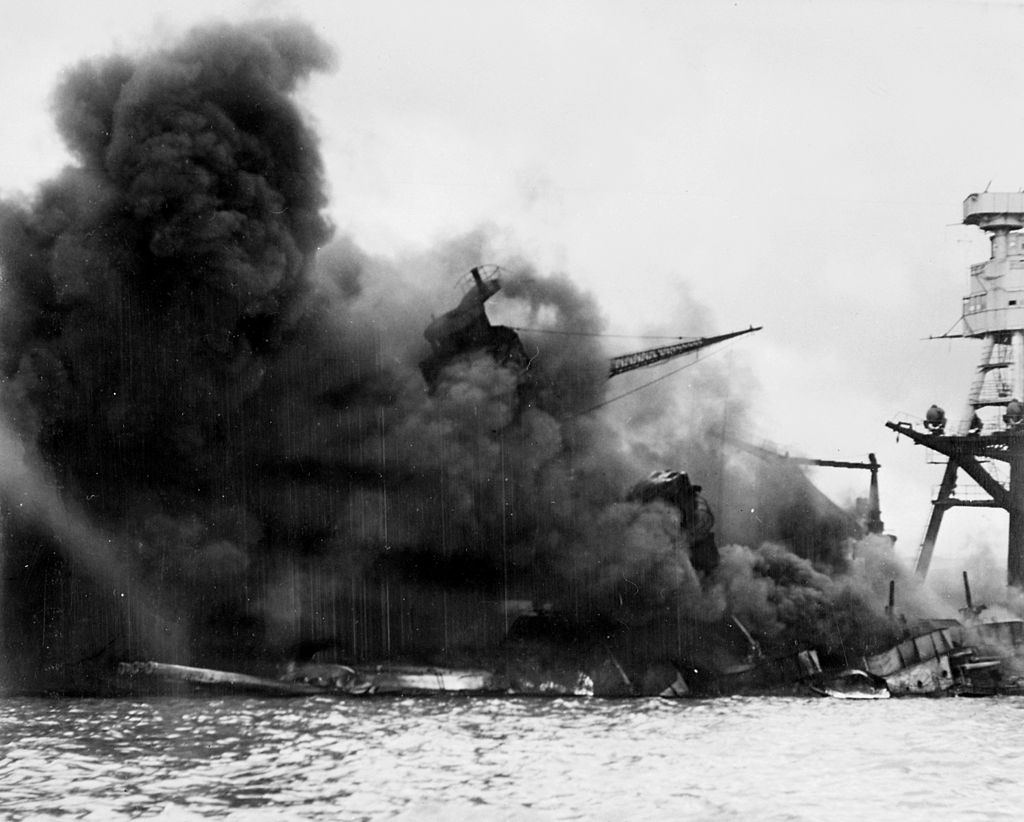 Fiugre 10.2.2: The sinking of the battleship the USS Arizona during the attack on Pearl Harbor.

In the meantime, a series of events shifted the focus of the war to North Africa, Greece, and the Balkans. Mussolini had ordered in the Italian army to invade British territories in Africa (most importantly Egypt) and to attack Yugoslavia and Greece in 1940. The Italians were largely ineffective, however, and all their attack did was inspire a spirited British counter-offensive and a strong anti-Italian resistance movement in the Balkans. The Germans, however, needed supplies from the Balkans and southeastern Europe, including both foodstuffs and natural resources like oil. It would be literally unable to continue the war if the Allies managed to take over these regions.

Thus, Germany sent forces to the Balkans and Africa to support their Italian allies. By the spring of 1941 the Germans held all of southeastern Europe and had pushed the British back in Africa – yet more important victories for the Nazis but also a delay in their plans. Another setback was that Hitler’s attempt to get the Spanish to join the war fell flat, when the Spanish dictator Franco indicated that Spain was simply too poor and weak, especially after its civil war, to join the Axis, despite the obvious political affinity between fascist Spain and Nazi Germany (Hitler said that he would rather have teeth extracted than endure another meeting like the one he suffered through with Franco).