The most noteworthy transformation that occurred in quotidian life due to the Industrial Revolution was urbanization, which absolutely exploded in the nineteenth century. Manchester, in northern England, is the quintessential example of an industrial city. It was close to major coal deposits, it had a large textile industry, it was linked to the sea via canal as of 1761, and it had an army of artisans and laborers because of its historic role as a site of wool production. In 1750 it had a population of 20,000, by 1775 it was 40,000, by 1831 it was 250,000, and by 1850 it was 400,000 - a 200% increase in a century. 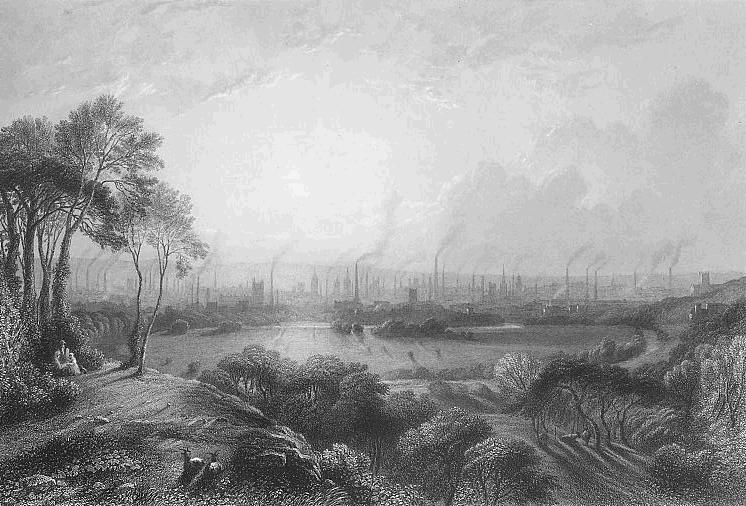 View of Manchester in 1840. While the painting is in the Romantic style, with the nature scene in the foreground, the masses of factory smokestacks are visible in the distance.

The living conditions, however, were abysmal. Whole families were crammed into one-room cellars, hovels, and cheap apartments. Pollution produced by the new factories streamed unfiltered into the air and water. Soot and filth covered every surface - early evolutionary biologists noted that certain moths that had a mutation that made them soot-brown survived and multiplied while their normal lightly-colored cousins died off. To deal with the pollution, factory owners simply started building taller smokestacks, which spread the pollution farther. Waste from mining (which was often toxic) was simply left in “slag heaps,” through which rainwater ran and from which toxic runoff reached water supplies. A coal miner who entered the mines as a teenager would almost certainly be dead by “middle age,” (40 at the oldest) since his or her lungs were ridden with toxic coal dust.

Landlords in the cities took advantage of the influx of laborers and their families by building cheap tenements in which several families often lived in a single room. There was no running water and sanitation was utterly inadequate. Food was expensive, in part because of an 1815 act in the British Parliament called the Corn Laws that banned the importation of grain and kept prices up (the wealthy, land-owning gentry class had pushed the law through parliament). Given the incredible squalor, epidemics were frequent. In turn, wages were paid at a near-subsistence level until after (roughly) 1850. Whenever there was a market downturn, sometimes lasting for years (e.g. 1839 – 1842), workers were summarily fired to cut costs, and some starved as a result.

The English poet William Blake famously referred to the factories as “satanic mills.” Likewise, the English novelist Charles Dickens used the grim reality of cities like Manchester as inspiration and setting for his novels like Hard Times and Oliver Twist. Since real wages did not increase among working people until fairly late in the century, the actually living conditions of the majority of the population generally worsened in industrial regions until the second half of the century. In Britain, laws were passed to protect horses before they were passed to protect children working in mines and factories.

The major cause of this misery was simple: the ruthless pursuit of profit by factory owners and manufacturers. The aim of the early factory owners and managers was to simplify the stages of the manufacturing process so that they could be executed by cheap, unskilled labor. Many skilled workers or artisans experienced the factory system as a disaster, bringing in its wake subjection to harsh work discipline, the degradation of craft skills, long hours, cheap wages, and the abuse of young women and children (who worked under the same conditions as did adult men).

While they had little reason to consider it, the industrial workers of northern England lived in a state of misery that was tied to another that was even worse across the Atlantic: the slave-based cotton economy of the American south which provided the raw material. Despite the British ban on the trans-Atlantic slave trade in 1807, the existing population of African-American slaves was sustained by natural reproduction and remained locked in a position of complete legal subservience, enforced with brutal violence. In a startling parallel, the efficiency of cotton production increased to keep pace with textile manufacturing in Britain despite the absence of major new technologies besides the invention of the cotton gin in 1794. That increase was due to the application of ever-increasing degrees of brutality, as slaves were forced to pick and process cotton at unprecedented speed, spurred on by raw violence at the hands of overseers.

Back in Europe, one unforeseen effect of the Industrial Revolution, tied to the misery of working conditions, was the creation of social classes. Until the modern era “class” was usually something one was born into; it was a legally-recognized and enforced “estate.” With industrialization, the enormous numbers of dirt-poor industrial workers began to recognize that their social identity was defined by their poverty and their working conditions, just as rich industrialists and tenement-owning slumlords recognized that they were united by their wealth and their common interest in controlling the workers. The non-noble rich and middle class came to distinguish themselves both from the working class and the old nobility by taking pride in their morality, sobriety, work ethic, and cleanliness. They often regarded the workers as little better than animals, but some also regarded the old nobles as corrupt, immoral, and increasingly archaic.

The middle classes that arose out of industrialization were the ranks of engineers, foremen, accountants, and bureaucrats that were in great demand for building, overseeing, and running new industrial and commercial operations. Some were genuine “self-made men” who worked their way up, but most came from families with at least some wealth to begin with. The most vulnerable group were the so-called “petty bourgeoisie,” shop-owners and old-style artisans, whose economic life was precarious and who lived in constant fear of losing everything and being forced to join the working class.

From this context, socialism, the political belief that government should be deeply invested in the welfare of the common people, emerged. Well before mass socialist parties existed, there were struggles and even massacres over working conditions; one notorious event was the Peterloo Massacre of 1819 in which hundreds of protesting workers in Manchester were gunned down by middle-class volunteer cavalry. Another famous group, the Luddites, destroyed factory equipment in a vain attempt to turn back the clock on industrialization and go back to hand-work by artisans.

Appalled more by the sexual impropriety of young girls and women being around male workers in mines and factories than by the working conditions per se, the British parliament did pass some laws mandating legal protections. The Factory Act of 1833 limited child labor in cotton mills, the Miners Act of 1842 banned the employment of girls and women (and boys under 10) underground, and in 1847 a Ten Hour Law limited the workday for women and children. These were exceptional laws; further legal protections for workers took decades and constant struggle by the emerging socialist groups and parties to achieve.