Ready to practice writing for specific audiences? Below you’ll find eight pictures of people with some information about each person included. Choose two people to write letters to. The purpose of your letter writing is to ask these people to give you $100. Please follow these two rules: you cannot say you will pay the money back, because you won’t. You’re not asking for a loan. Also, you cannot lie or exaggerate about why you need the $100. Think of a real reason. We could all use $100, after all! With these parameters in mind, how will you manage to persuade these people to give you the money? Jeremiah is the director of a non-profit organization that helps homeless youth get an education. He is thirty-three and is married with three small children. In his free time, Jeremiah enjoys practicing karate, hiking with his wife and kids, and reading historical fiction. Deborah is a forty-year-old professional violinist who plays full time in the Portland Symphony Orchestra. She considers the orchestra to be her family. She isn’t married and doesn’t have children. When she’s not practicing her instrument, Deborah enjoys painting with acrylics and cross-country skiing. Ronaldo is a twenty-seven-year-old middle school biology teacher who also coaches track and field. He and his wife have just adopted two children from Haiti, so most of Ronaldo’s free time is spent reading parenting books and being the best father he can be. Grace is a twenty-year-old Marine in a family of Marines. She met her partner Jane during basic training, and they are planning to get married after they’ve both finished college. Grace’s hobbies include kickboxing, wakeboarding, and training her dog, Boss. Henry is a retired CEO for a fishing rod manufacturing company. At the age of eighty-four, he still enjoys fly fishing all over the Pacific Northwest. He is recently widowed and has seven grandchildren who go fishing with him regularly. Sophia is a dancer, dance teacher, and new mother. She just turned thirty and loves to travel with her husband. Her goal is to see every continent (except for Antarctica) before the age of forty. So far, she’s been to North and South America, Africa, and Asia. Larry is a foreman for a construction company that builds skyscrapers and other types of office buildings. He’s fifty-seven and has saved enough to be able to retire by the age of sixty, when he hopes to move to the mountains and build a log cabin with his partner David. 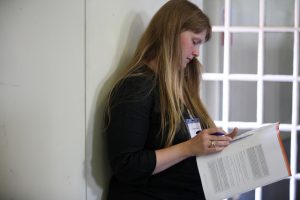 Michelle is a pediatric doctor who specializes in childhood leukemia. She is thirty-five and newly married to an ER doctor. They support each other’s research projects and other professional goals. They don’t want children, feeling that their work is their primary life focus.

Figure 1: “Listening at a conference” by BMA is licensed under CC BY-NC 2.0

Figure 3: “Slongood” by bidding is licensed under CC BY 2.0

Figure 5: “The Grandfather” by Xavez is licensed under CC BY-SA 2.0

Figure 8: “Waiting to Speak” by The BMA is licensed under CC BY-NC 2.0