What remains are the little connecting word categories: conjunctions, prepositions, and articles. These small words may not seem as important as verbs, nouns, and adjectives, but they are the backbone of English: these are the words that give our language structure.

Here are some examples of these used in sentences:

As you can see from the examples above, a comma only appears before these conjunctions sometimes. So how can you tell if you need a comma or not? There are three general rules to help you decide.

Let’s look back at one of our example sentences:

The current from the storage batteries can power lights, but the current for appliances must be modified within an inverter.

There are two complete ideas in this sentence. A complete idea has both a subject (a noun or pronoun) and a verb. The subjects have been italicized, and the verbs bolded:

Because each of these ideas could stand alone as a sentence, the coordinating conjunction that joins them must be preceded by a comma. Otherwise you’ll have a run-on sentence.

Run-on sentences are one of the most common errors in college-level writing. Mastering the partnership between commas and coordinating conjunctions will go a long way towards resolving many run-on sentence issues in your writing.

So what if there’s only one complete idea, but two subjects or two verbs?

So what do you do if there are three or more items?

As you can see in the examples above, there is a comma after each item, including the item just prior to the conjunction. There is a little bit of contention about this, but overall, most styles prefer to keep the additional comma (also called the serial comma). We discuss the serial comma in more depth in Text: Commas.

Many students are taught—and some style guides maintain—that English sentences should not start with coordinating conjunctions.

This video shows that this idea is not actually a rule. And it provides some background for why so many people may have adopted this writing convention:

Are the following sentences correctly punctuated?

The first artificial hearts were made of smooth silicone rubber, which apparently caused excessive clotting and, therefore, uncontrolled bleeding.

When used to separate sentences, as in the examples below, a semicolon is required before the conjunction and a comma after.

Adverbial conjunctions include the following words; however, it is important to note that this is by no means a complete list.

Fill in the missing punctuation marks for the sentences below:

The table below shows some examples of correlative conjunctions being used in a sentence:

Select the correct conjunction for each sentence: 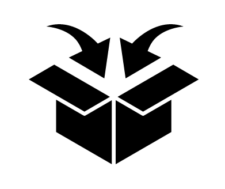 A preposition combines with another word (usually a noun or pronoun) called the complement. Prepositions are still in bold, and their complements are in italics:

Prepositions generally come before their complements (e.g., in England, under the table, of Jane). However, there are a small handful of exceptions, including notwithstanding and ago:

Prepositions of location are pretty easily defined (near, far, over, under, etc.), and prepositions about time are as well (before, after, at, during, etc.). Prepositions of “more abstract relationships,” however, are a little more nebulous in their definition. The video below gives a good overview of this category of prepositions:

Thus a closed group simply refers to a part of speech that doesn’t allow in new words. All of the word types in this section–prepositions, articles, and conjunctions–are closed groups.

Identify the prepositions in the following sentences:

The prepositions have been bolded in the sentences below:

There are also some prepositions that have more than one word:

ENDING A SENTENCE WITH A PREPOSITION

As we just learned, it is totally okay to end a sentence with a preposition. And, as we saw, it can often make your writing smoother and more concise to do so.

However, it’s still best to avoid doing it unnecessarily. If your sentence ends with a preposition and would still mean the same thing without the preposition, take it out. For example:

Where are you at?

That’s not what it’s used for.

There are three articles in the English language: the, a, and an. These are divided into two types of articles: definite (the) and indefinite (a, an). The definite article indicates a level of specificity that the indefinite does not. “An apple” could refer to any apple; however “the apple” is referring back to a specific apple.

Thus, when using the definite article, the speaker assumes the listener knows the identity of the noun’s referent (because it is obvious, because it is common knowledge, or because it was mentioned in the same sentence or an earlier sentence). Use of an indefinite article implies that the speaker assumes the listener does not have to be told the identity of the referent.

There are also cases where no article is required:

Watch this quick introduction to indefinite and definite articles and the difference between the two:

The indefinite article of English takes the two forms a and an. These can be regarded as meaning “one,” usually without emphasis.

Distinction between a and an Let’s try it again with an:

Some speakers and writers use an before a word beginning with the sound h in an unstressed syllable: an historical novel, an hotel. However, where the h is clearly pronounced, this usage is now less common, and a is preferred.

Look at the following words. When they require an indefinite article, should it be a or an? The definite article the is used when the referent of the noun phrase is assumed to be unique or known from the context. For example, in the sentence “The boy with glasses was looking at the moon,” it is assumed that in the context the reference can only be to one boy and one moon.

The can be used with both singular and plural nouns, with nouns of any gender, and with nouns that start with any letter. This is different from many other languages which have different articles for different genders or numbers. The is the most commonly used word in the English language.

Choose the article that should go in each sentence:

In most cases, the article is the first word of its noun phrase, preceding all other adjectives and modifiers.

There are a few exceptions, however: