[Smarthistory Video > Expressionism to Pop Art > Art between the wars: the avant-garde & the rise of totalitarianism > the International avant-garde > Mondrian, Composition No. 11, with Red and Blue]  Speakers: Dr. Beth Harris, Dr. Steven Zucker

An interactive or media element has been excluded from this version of the text. You can view it online here: http://pb.libretexts.org/art1/?p=43

The cultural movement of Surrealism began in the 1920s, and features the element of surprise, unexpected juxtapositions, and non sequiturs.

Surrealism is a cultural movement that began in the early 1920s, and is best known for writing and visual art. Surrealist works feature the element of surprise, along with unexpected juxtapositions and non sequiturs. First and foremost, Surrealist artists and writers regard their work as an expression of the philosophical movement, with the artwork being an artifact. Leader André Breton was explicit in his assertion that Surrealism was above all a revolutionary movement. Surrealism developed out of the Dada activities during World War I and the most important center of the movement was Paris. From the 1920s onward, the movement spread around the globe, eventually affecting the visual arts, literature, film, and music of many countries and languages, as well as political thought and practice, philosophy, and social theory.

World War I scattered the writers and artists who had been based in Paris, and in the interim many became involved with Dada, believing that excessive rational thought and bourgeois values had brought the conflict of the war upon the world. The Dadaists protested with anti-art gatherings, performances, writings, and artworks. After the war, when they returned to Paris, the Dada activities continued.

During the war, André Breton, who had trained in medicine and psychiatry, served in a neurological hospital where he used Sigmund Freud’s psychoanalytic methods with soldiers suffering from shell shock. Meeting the young writer Jacques Vaché, Breton felt that Vaché was the spiritual son of writer and metaphysical thinker Alfred Jarry. He admired the young writer’s antisocial attitude and disdain for established artistic tradition. Later Breton wrote, “In literature, I was successively taken with Rimbaud, with Jarry, with Apollinaire, with Nouveau, with Lautréamont, but it is Jacques Vaché to whom I owe the most. ”

Back in Paris, Breton joined in Dada activities and started the literary journal Littérature along with Louis Aragon and Philippe Soupault. They began experimenting with automatic writing—spontaneously writing without censoring their thoughts—and published the writings, as well as accounts of dreams, in the literary journal. Breton and Soupault delved deeper into automatism and wrote The Magnetic Fields (1920).

The Development of the Surrealist Movement

Continuing to write, attracting more artists and writers, Breton and Soupault came to believe that automatism was a better tactic for societal change than Dadaist attacks on prevailing values. The group grew to include Salvador Dalí, Man Ray, Joan Miró, Marcel Duchamp, among other notable artistic figures. As the Surrealists developed their philosophy, they believed that Surrealism would advocate the idea that ordinary and representative expression was vital and important, but that expression must be fully open to the imagination. Freud’s work with free association, dream analysis, and the unconscious was of utmost importance to the Surrealists as they developed methods to liberate their imaginations. They embraced idiosyncrasy, while rejecting the idea of an underlying madness. Later, Salvador Dalí explained it as: “There is only one difference between a madman and me. I am not mad.”

Along with dream analysis, the Surrealists emphasized that “one could combine inside the same frame, elements not normally found together to produce illogical and startling effects” . Breton included the idea of the startling juxtapositions in his 1924 manifesto, taking it in turn from a 1918 essay by poet Pierre Reverdy, which said: “a juxtaposition of two more or less distant realities. The more the relationship between the two juxtaposed realities is distant and true, the stronger the image will be — the greater its emotional power and poetic reality” . Salvador Dalí, The Persistence of Memory (1931) René Magritte’s La Trahison des Images (“The Treachery of Images”) (1928-9) or Ceci n’est pas une pipe (“This is not a pipe”). Magritte’s work frequently displays a collection of ordinary objects in an unusual context, giving new meanings to familiar things.

The group aimed to revolutionize human experience, in terms of the personal, cultural, social, and political aspects. They wanted to free people from false rationality, and also from restrictive customs and structures. Breton proclaimed that the true aim of Surrealism was “long live the social revolution, and it alone! ” To this goal, at various times Surrealists aligned with communism and anarchism. In 1924 they declared their philosophy in the first “Surrealist Manifesto. ” That same year they established the Bureau of Surrealist Research, and began publishing the journal La Révolution Surréaliste.

Facial hair indelibly marks the self-portraits of Mexican artist Frida Kahlo. In an era when women still wore elaborate hairstyles, hosiery, and attire, Kahlo was a rebellious loner, often dressed in indigenous clothing. Moreover, she lived as an artist during a period when many middle-class women sacrificed their ambitions to live entirely in the domestic sphere. Kahlo flouted both conventions of beauty and social expectations in her self-portraits. These powerful and unflinching self-images explore complex and difficult topics including her culturally mixed heritage, the harsh reality of her medical conditions, and the repression of women. 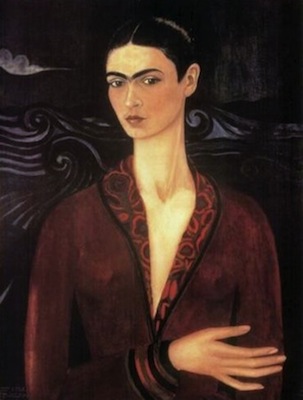 The double self-portrait The Two Fridas, 1939 (above) features two seated figures holding hands and sharing a bench in front of a stormy sky. The Fridas are identical twins except in their attire, a poignant issue for Kahlo at this moment. The year she painted this canvas she was divorced from Diego Rivera, the acclaimed Mexican muralist. Before she married Rivera in 1929, she wore the modern European dress of the era, evident in her first self-portrait (left) where she dons a red velvet dress with gold embroidery. With Rivera’s encouragement, Kahlo embraced attire rooted in Mexican customs. 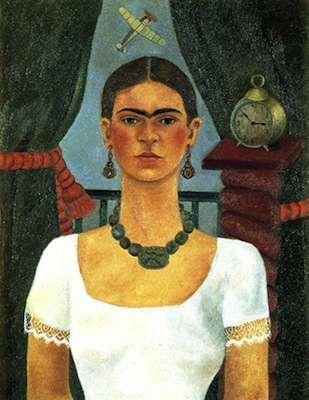 In her second self-portrait (left) her accessories reference distinct periods in Mexican history (her necklace is a reference to the pre-Columbian Jadite of the Aztecs and the earrings are Colonial in style) while her simple white blouse is a nod to peasant women.

The portraits from the 1930s reflect Kahlo’s growing penchant for indigenous attire and hair-styling, as is evident in Frieda and Diego Rivera, 1931 (below) and The Two Fridas. Yet Kahlo never abandoned dressing her subjects and herself in mainstream, European dress; her female relatives wear non-indigenous clothing in My Grandparents, My Parents, and I (Family Tree), 1936 (below). In this painting, the bridal dress Kahlo’s mother wears is reminiscent of the white, stiff-collared dress the artist wears inThe Two Fridas. Indeed, the grotesque view into each woman’s insides is heightened by the virginal whiteness of both dresses.

In her brief lifetime, Kahlo painted about two hundred works of art, many of which are self-portraits. With the exception of a few family trees, the double-portrait with Rivera andThe Two Fridas represents a departure in her oeuvre. If a self-portrait by definition is a painting of one’s self, why would Kahlo paint herself twice? One way to answer this question is to examine The Two Fridas as a bookend to the 1931 portrait, Frieda and Diego Rivera. Though this painting was meant to celebrate the birth of their union, their tentative grasp seems to reflect Kahlo’s misgivings about her husband’s fidelity. By contrast, the double self-portrait, though laden with suffering, exhibits resilience. The two Fridas clasp hands tightly. This bond is echoed by the vein that unites them. Where one is weakened by an exposed heart, the other is strong; where one still pines for her lost love (as underscored by the vein feeding Rivera’s miniature portrait), the other clamps down on that figurative and literal tie with a hemostat. Human anatomy is often graphiclty exposed in Kahlo’s work, a topic she knew well after a childhood bout with polio deformed her right leg and a bus accident when she was eighteen years old left her disabled and unable to bear children. She would endure 32 operations as a result.    Detail with Hemostat (photo: Dave Cooksey, CC: BY-NC-SA 2.0)  Kahlo utilized blood as a visceral metaphor of union, as in the 1936 family portrait (below) where she honors her lineage through these bloody ties. She returns to this metaphor in The Two Fridas though with the added impact of two hearts, both vulnerable and laid bare to the viewer as a testament to her emotional suffering.

“I am the person I know best”

Photographs by artists within her milieu, like Manuel Alvarez Bravo and Imogen Cunningham, confirm that Kahlo’s self-portraits were largely accurate and that she avoided embellishng her features. The solitude produced by frequent bed rest—stemming from polio, her near-fatal bus accident, and a lifetime of operations—was one of the cruel constants in Kahlo’s life. Indeed, numerous photographs feature Kahlo in bed, often painting despite restraints. Beginning in her youth, in order to cope with these long periods of recovery, Kahlo became a painter. Nevertheless, the isolation caused by her health problems was always present. She reflected, “I paint self-portraits because I am so often alone, because I am the person I know best.”