The word censorship brings up ideas of suppressing explicit, offensive images and written material, perhaps of a sexual or political nature, or accounts of violence. What is considered prurient or sacrilegious or barbarity is not universal, however, so what was acceptable during one era may be banned in the next. 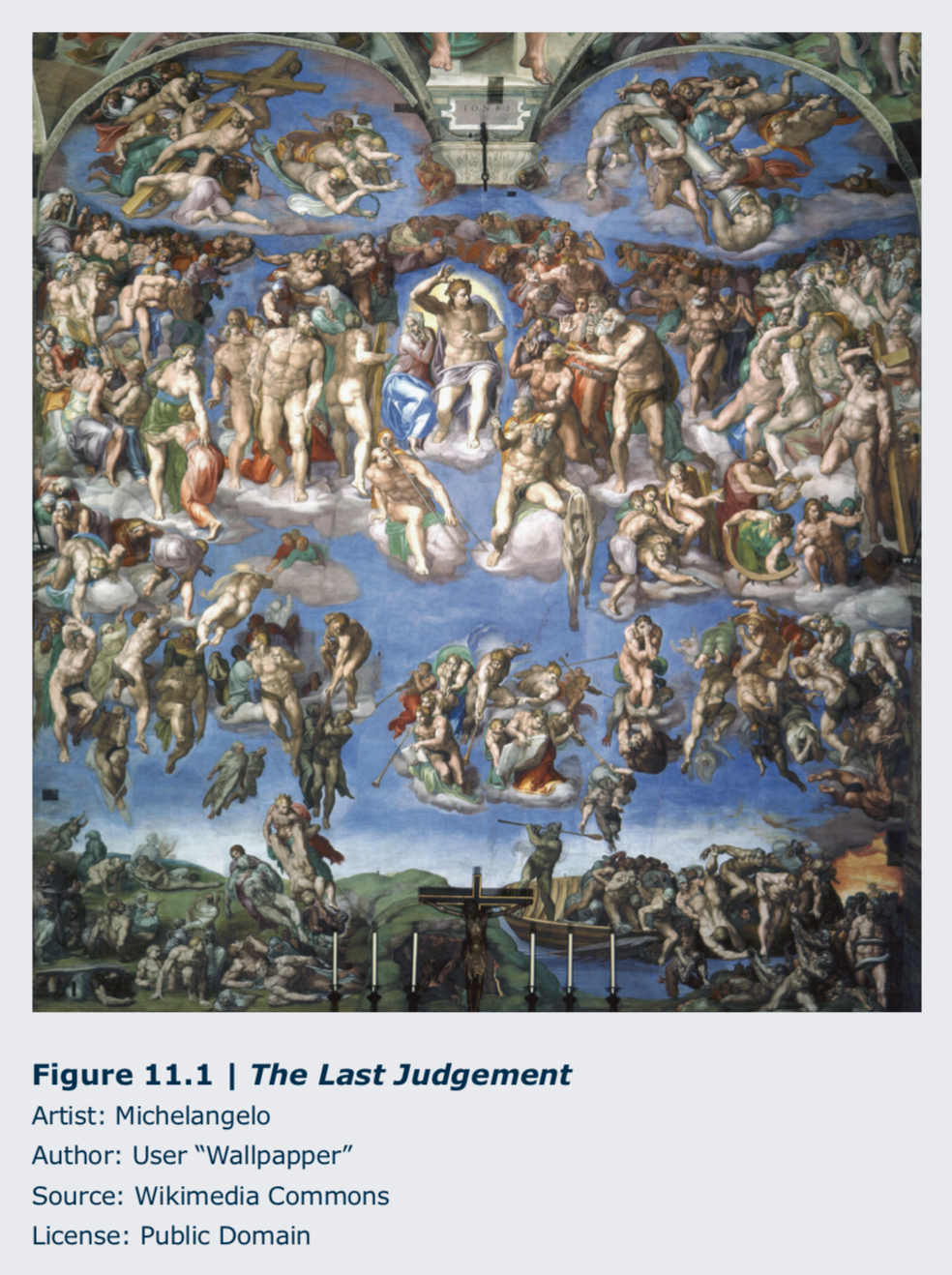 Michelangelo was a sculptor, painter, and architect. He considered his sculptural and architectural works to be of far greater importance than his relatively few painted works. But many know him today as much for the two frescoes, or wall paintings, he completed in the Sistine Chapel in Rome as for the far greater number of marble figures and buildings he created. The chapel is within the Pope’s residence in Vatican City, the seat of the Roman Catholic Church, in Rome. The first fresco Michelangelo painted on the 134-foot-long ceiling of the Sistine Chapel, from 1508 to 1512, is a complex series of nine scenes from the Book of Genesis, architectural elements, and figures. It was the first large-scale painting of his career. He returned to paint The Last Judgment on the wall behind the altar from 1535 to1541. (Figure 11.1)

The Catholic Church had changed tremendously in the twenty-four years between when the first work was completed and the second one begun. In 1517, the singular authority of the Catholic Church was called into question when Martin Luther, a German monk, issued a series of complaints against Church practices, especially the selling of indulgences, or pardoning of sins. As opposed to the complex hierarchy of the Church, and an emphasis on its teachings as the only means to salvation, Luther championed personal faith and adherence to the word of the Bible.Although his beliefs were denounced, and Luther was excommunicated from the Church in 1521, the new Protestant faith swept through northern Europe. The Protestant Reformation, as Luther’s attempts to revise the doctrines of the Roman Catholic Church were known, was not just a seri- ous threat to the Church’s authority, it prompted the wholesale examination and revision of the Church’s structure, activities, and methods.

Michelangelo began to paint The Last Judgment in 1535. In that time of upheaval and uncertainty, the subject of the faithful rising to their reward at Christ’s side in eternity while those who doubt or turn away fall to their eternal damnation could have been intended to reassure those remaining true to the Church. Rather than sticking to a clearly structured and hierarchical organization of figures, however, Michelangelo broke from tradition to show dynamic groups of moving, gesturing, and emotion-filled angels, saints, blessed, and damned. Although Christ is in the centerwith His right arm raised, it is not clear if He is caught up in the erratic and chaotic swirl of the figures surrounding Him or confidently directing them according to their fates. The lack of distinction was originally heightened by the uniformity of clothing, or lack thereof, as Michelangelo painted the majority of figures nude, removing signs of earthly status and riches.

When completed, the fresco was hailed as a masterpiece, but in the following decades, it came under sharp criticism. As the Protestant Reformation by Martin Luther and his followers con- tinued to revolutionize religious doctrine and practices throughout Europe, the Catholic Church formed The Council of Trent (1545-1563) in response. The Counter-Reformation remained ad- amant in condemning the new Protestant faith but did away with many excesses and leniencies that had grown within the Church, including art that served as a distraction from its proper use as a tool of worship. In its findings, The Council of Trent stated that used properly, art instructed the faithful to “order their own lives and manners in imitation of the saints; and may be excited to adore and love God; and to cultivate piety.” Michelangelo’s Last Judgment lacked the clarity of message and propriety now demanded in religious art so that, at odds with the Council’s decree, “there be nothing seen that is disorderly, or that is unbecomingly or confusedly arranged, nothing that is profane, nothing indecorous, seeing that holiness becometh the house of God.”

In 1565, two years after the Council’s decree and the year after Michelangelo’s death, Daniele da Volterra (1509-1566, Italy) was commissioned to paint drapery on the nude figures and alter the posi- tions of some that were deemed too indelicate. Some of his modifications, and others carried out in the eighteenth century, were removed when the fresco was cleaned and restored between 1980 and 1994.