One of the more important themes emerging from the last century has been the individual’s search for identity. For example, genealogical websites have proliferated and special television programs are devoted to the subject. Since it first aired on PBS in 2012, Henry Louis Gates Jr.’s Finding Your Roots has been a popular program. The British version, The Guardian, has been successful since 2006.

Some anthropologists suggest that the deep-rooted interest in identity or ancestry is partly shaped by evolutionary forces dating back to early humans supporting each other in extended family groups. Anthropologist Dwight Read theorizes that the Neolithic people were the first to understand the concept of the family tree and the perception of self in a family unit and in society.1 If connected through blood, people have the tendency to be more willing to care for each other; a common interest and support system is readily realized within a clan or a group.

Early humans created two- and three-dimensional likenesses of themselves in their environment to help understand who they were in relation to the other members of their group. Con- temporary humans do the same; they make records of themselves with family members, most commonly in photographs and Selfies, and on Instagram. It is the same fundamental concept and placement in an environment that collectively identifies who we are in society, for example, in social gatherings, organizations, and religious settings. This means, above all, that we must place ourselves within the world in order to obtain identity. Children search for their identity at a very young age by observing and recognizing their parents and family members. Their markings with in a simple drawing of self and family similar to those of early humans help them to vindicateand confirm who they are and how they are perceived by their family group.

Like children, artists sometimes explore their identity through self-portraits and symbolically in works of art that relate to ancestry or culture. Doing so allows them to take a look inside their core and see how they fit within their contemporary culture; this investigation of self plays an important role in how artists understand their environment and the world.

Vincent van Gogh is known as a person who spent much of his time in solitude. He painted more than thirty self-portraits between the years 1886 and 1889, placing him among the most prolific self-portraitists of all time. Indeed, some of his most respected works are his self-portraits that trace his image throughout the last years of his life, the most crucial to his career. (Figures 8.1, 8.2, and 8.3) While Van Gogh used the study of his own image to help develop his skills as an artist, these self portraits also give us insights into the artist’s life and well being, how he fit in society, and his place among the groups with whom he associated. 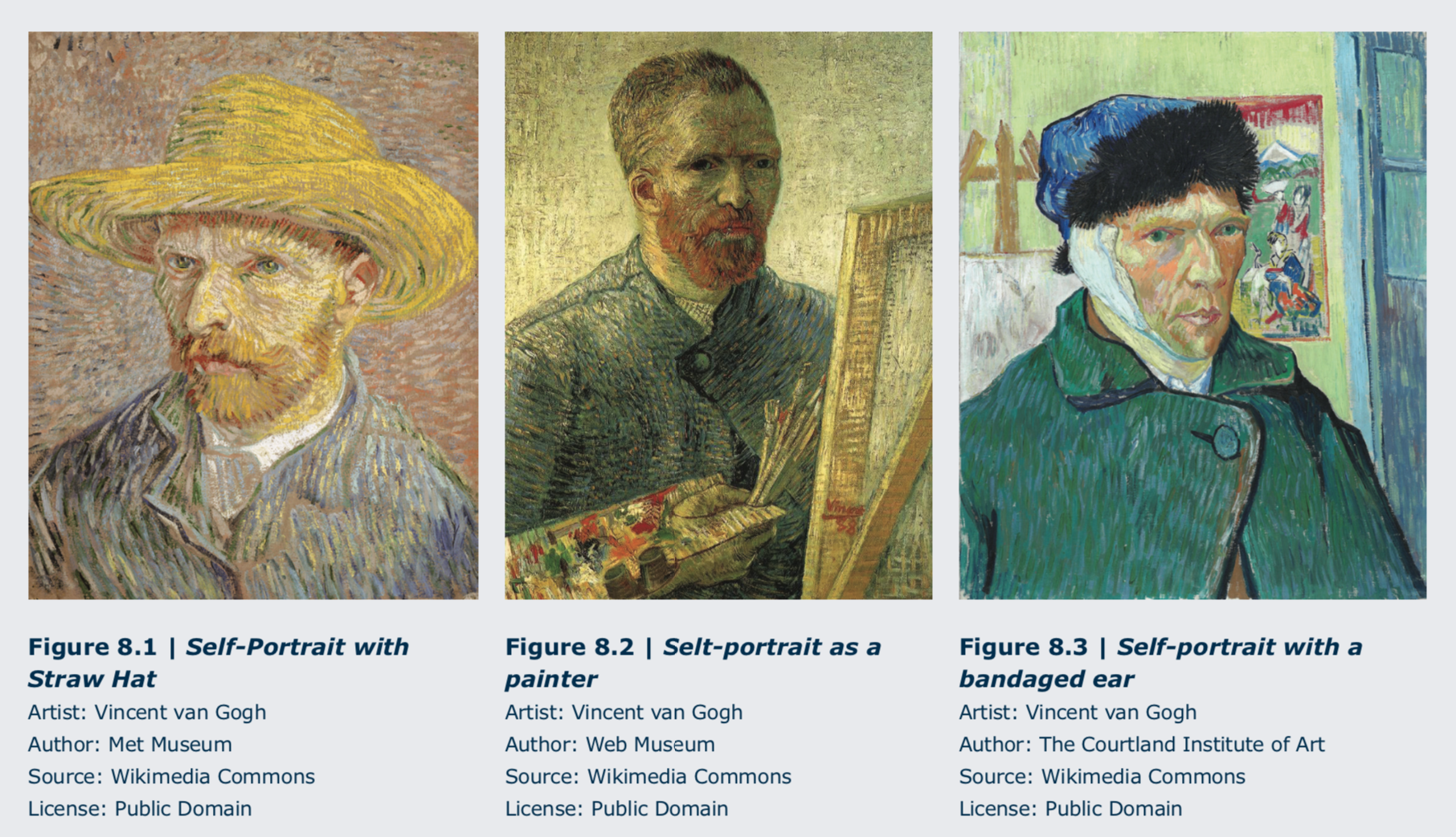 Like Van Gogh, Pablo Picasso painted a number of self-portraits. Throughout his career, Picasso painted various likenesses that reflected changes in himself, his style, his artistic development, as well as in his life style and beliefs—all of which may be viewed closely from the content of his paintings. (Figures 8.4 and 8.5) The first self-portrait, painted in 1901 while he was establishing himself as an artist in Paris, France, and still spending time in Barcelona, Spain, reflects the somber mode and tones of his Blue Period (1901-1904). The second, dated to 1906, at the very end of his Rose Period (1904-1906), Picasso depicts himself as the artist who by that time was moving in artistic circles, gaining respect, and acquiring patrons. Frida Kahlo (1907-1954, Mexico) used the iconography of her Mexican heritage to paint herself and the pain that had become an integral part of her life following a bus accident at the age of 18 in which she suffered numerous injuries. She identified as a group member of her country, with Mexican culture and ancestry, and as belonging to the female gender. Kahlo’s self-portraits are dramatic, bloody, brutal, and at times overtly political. (Self-Portrait, Frida Kahlo: upload.wikimedia.org/Wikipedia/en/1/1e/ Frida_Kahlo_%28self_portrait%29.jpg) In seeking her roots, she voiced concern for her country as it struggled for an independent cultural identity. She spoke to her country and people through her art. Kahlo’s art was inspired by her public beliefs and personal sufferings; she wanted her art to speak from her consciousness.

Although self-portraits of today may be slightly different from those of earlier decades, they still depict self-exploration and identity through society and groups that communicate who we are. Cai Guo-Qiang (b. 1958, China, lives USA) exploded small charges of gunpowder to create an image of himself. (Self- Portrait: A Subjugated Soul, Cai Guo-Qiang: http:// www.caiguoqiang.com/sites/default/files/styles/medium/public/1989_SelfPortrait_0389_001ltr-web. jpg) Different from those by Van Gogh, Picasso, and Kahlo, Cai’s self-portrait does not have any likeness or resemblance to his personal features, but it too sends a message about our society and how Cai relates to it. For example, the artist associates the lack of identifying information, rendering him anonymous, with contemporary society, and the fired gunpowder with both chaos and transformation.

Despite the distance in time that separates early and modern humans, the search for their place in society and who they are remains of fascination and a mystery to all humans regardless of their time in history.