Aesthetics, the study of principles and appreciation of beauty, is linked to our thinking about and connections to art. During the eighteenth century in Europe, philosophers and other thinkers began to question the interrelationship of art, beauty, and pleasure. German philosopher Immanuel Kant characterized the appreciation of beauty as the “judgment of taste,” which is comprised of two parts: subjectivity and universality. Subjectivity, as the term suggests, is based on the feeling of pleasure or displeasure experienced by the individual viewer. Universality refers to views about art that are held in common, the “norm,” so to speak. Kant believed the beauty of art can only be appreciated when the viewer is “disinterested,” that is, when the viewer is deriving pleasure that is not based upon or produces desire. If the viewer’s subjective judgment is disinterested, then a universally valid measure of taste can be rendered. Only if the viewer can separate the appreciation of art from the desire for it, and is instead interested in art for its pure beauty, or aesthetics, can the viewer be said to have achieved the judgment of taste. 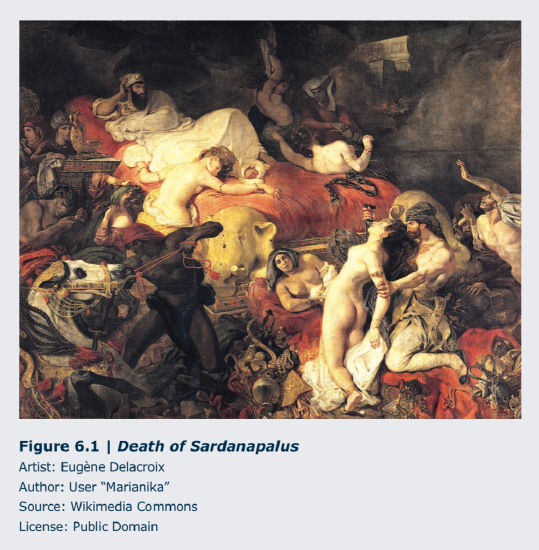 Writers, composers, and artists who were part of the Romantic movement that emerged in Europe at the end of the eighteenth century soon questioned Kant’s belief that aesthetics or the study of beauty in art, what he termed the judgment of taste, was both disinterested and universal. Turning away from categories and definitions based on rationality, Romanticism celebrated spontaneity, emotion, the individual, and the sublime: intellectual and imaginative sensations that defy measurement or explanation.

Romantic painter Eugène Delacroix (1798-1863, France) spent his lifetime seeking to express the extremes of human emotion and experience in his work based on history, literature, current events, and his own travels. With passages of brilliant color applied in thick, vigorous brush strokes, Delacroix depicted beauty, violence, tragedy, and ecstasy with equal passion, in waves of movement swiftly passing across his canvas. This quality can be seen in The Death of Sardanapalus where the shadowed figure of the Assyrian king surveys the scene of carnage taking place before him with dispassion. (Figure 6.1) Although historical accounts indicate that Sardanapalus did have all of his possessions destroyed, including his concubines and horses, rather than surrender them to his enemies, Delacroix largely relied on his own imagination for his frenzied interpretation and embellishment of the scene.

John Dewey, an American philosopher, psychologist, and educational reformer, in 1934 wrote Art and Experience. He described the aesthetic experience in ways that somewhat reflect the process Delacroix brought to his painting. Dewey stated, however, that although it begins with the art object, the experience of art extends far beyond that one element to produce an ongoing exchange between artist, viewer, and culture at large that culminates in an experience that is a “manifestation, a record and celebration of the life of a civilization.”1 The “sudden” pleasure one feels when engaging with a work of art or architecture is, in fact, the product of a long process of growth and engagement. For example, walking around and through a grand structure such as Reims Cathedral (1211-1275) in France, with its High Gothic façade, lavish sculptural decoration, extreme verticality, and expansive windows, is breathtakingly impressive because object (building) and experience have coalesced. (Figure 6.2) Further, we continue learning from the experience of observing art or beauty what, why, and when depends on how much we receive from the experience and from successive encounters. The movement in thinking about aesthetics from Kant’s judgment of taste, with
its assumption of an intellectually based universality, to Dewey’s claim that the aesthetics of the work of art are found in the viewer’s experience of it, at that moment and over time, mirror substantial changes that have taken place in all aspects of scientific and intellectual thought over the past three centuries. What we can learn from their theories is that we can examine ideas about “fine arts,” “beauty,” and “aesthetics” and perhaps come up with similar definitions conveying ideas of pleasure, temporary enlightenment, and human experience but, we may not.

For example, Miami-based artist Jona Cerwinske (USA), began his career making graffiti art and street murals and considers any surface a ground for art. In 2007, he covered a Lamborghini car with an intertwined network of organic shapes and geometric lines. (Lamborghini Art, Jona Cerwinske: www.dubmagazine.com/home/cars...ske-exotic-art) This work of art could be described as an example of disinterested contemplation: you look at the Lam- borghini and contemplate the beauty and elegance of the car and its design. In this way, the car’s aesthetic appeal stems from admiration of the object and the delight it gives; it is a judgment of taste. Conversely, it could be described as an aesthetic experience: looking at the Lamborghini pro- duces a response of pleasure, perhaps at its beauty, its place in the history of fine motor cars, or the thought of owning and driving such a prestigious and fast vehicle. In this case, appreciation of beauty is both a broadly intellectual as well as an individual emotional response.