The most basic point of style, perhaps, is type or category, whether a work is representational or abstract. In the broadest terms, if the work has visual reference to the phenomenal world, we consider it to be representational. That definition suffers from over generality, though, since any physical or visual expression that has some reference to the physical world includes some aspect that we see as reflecting the physical world. And, to some extent, all works are also abstract, in that they might remind us of what we see in the phenomenal world by only reflecting some physical feature(s) rather than detailing the object, place, or person itself. Having said that, we can proceed to see art in terms of its relative representation or relative abstraction of the original form.

It may help to start here by examining a number of works; each is based on the artist’s observations of cows but is distinctive in what the artist elected to convey in their artwork about cows on the continuum from representation to abstraction. The first of these works is by Rosa Bonheur (1822-1899, France), who depicted a variety of animals in great detail with regard to their anatomy and physiognomy, and took great care to render her illustrations with fidelity to the appearance to the actual animals she had observed. (Figure 4.3) Artistically gifted and thoroughly trained, she went on to deepen her own knowledge and to hone her skills by visiting farms, veterinarian dissections, and slaughterhouses in order to develop extensive knowledge of her preferred subject matter, with which she created imagery of animals and other features of rural farm life. Her cows would be correctly described as very naturalistic in appearance their forms are quite similar in appearance to actual cows. 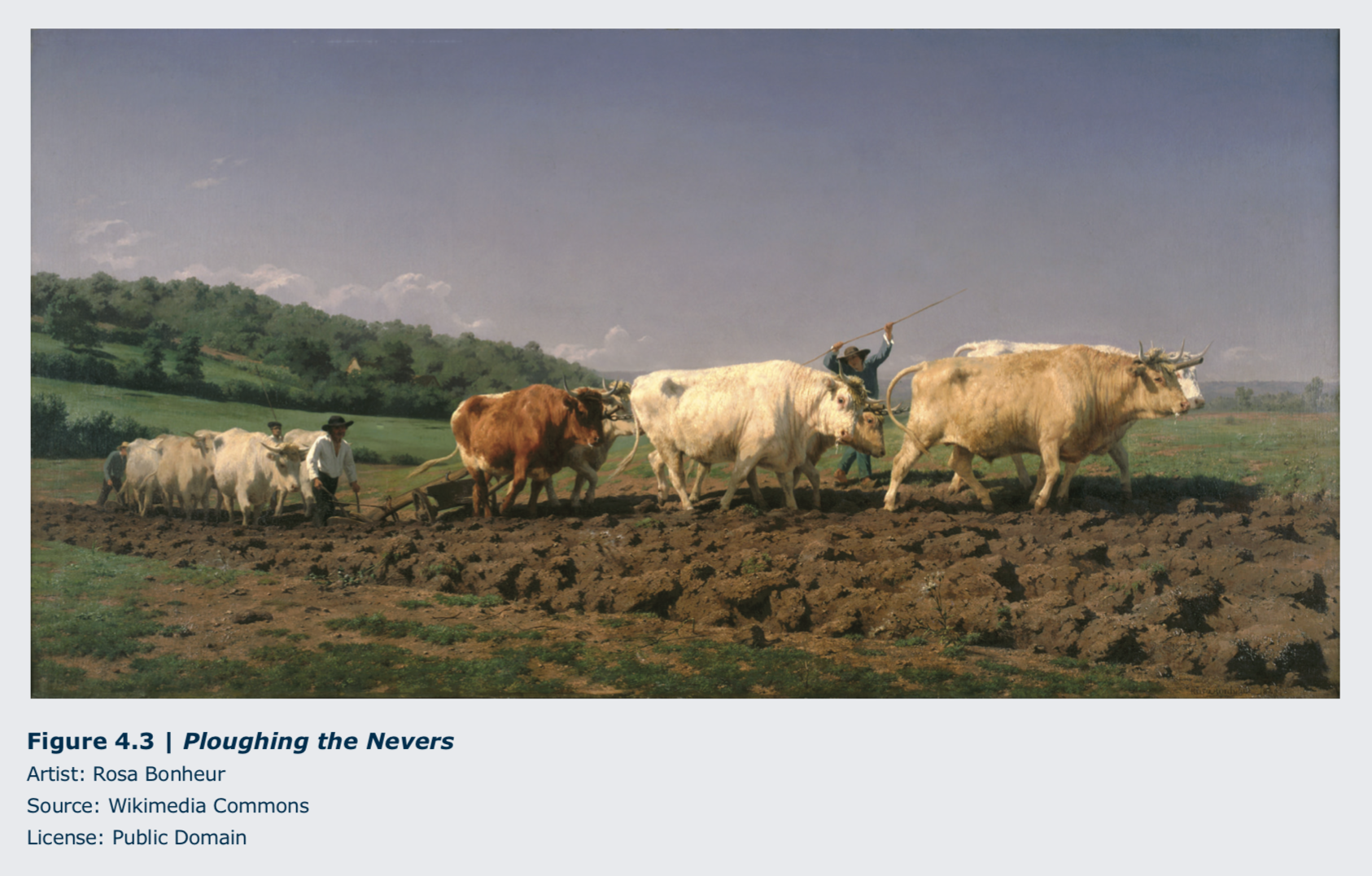 In comparison, if we examine the renditions by folk artist Edward Hicks (1780-1849, USA), we see cows that are much less rigorous in their resemblance, most likely the result of his not having had exacting training and practice in precise replication. (Figure 4.4) A Quaker minister, Hicks treated his painting at first as a supplemental avocation, then as his primary means of supporting his family. He used it to express themes of spiritual and historical community events that interested him, generally in simplified landscape settings that emphasized narrative and symbolic messages rather than exact proportions and details. In some works, though, the difference in correspondence to natural appearance can be due to the artist’s very different purpose for the work. The Yellow Cow by Franz Marc (1880-1916, Germany) clearly does not slavishly reproduce natural appearances but instead seeks to convey through abstraction a sense of light-hearted lyrical expression for the animal. (Figure 4.5) To achieve this end, Marc took great liberty in creating an image that went far beyond what he saw, to make an expression that carries messages of what he thought and felt about his subject. Marc created a great many images of animals in nature that were metaphorical reflections of his views of mankind and the human spirit. Such a movement towards abstraction often derives from the artist’s wish to express an emotional or intellectual commentary on the subject, or to use the subject as a starting place to diverge from visual appearances of the purely physical phenomenal world in order to create a statement of some other ideas. Another artist bearing investigation in this regard is Theo van Doesburg (1883- 1931, Netherlands), who used his own philosophical probing to frame a systematic path from naturalism in his renditions of the cow to an abstraction that is visually quite far removed from what most of us see in the phenomenal world. (Figure 4.6) Beginning with a series of exploratory sketches, he sought to reduce the linear forces of a cow’s form to the three he thought were essential components of the physical and metaphysical world, that is, vertical, horizontal, and diagonal, while reducing the three dimensions of the cow’s form to the painting’s two-dimensional surface. At the same time, he tried to simplify the forms and volumes, progressively creating a strongly abstracted picture that few of us would likely recognize as of a cow if we were not led through the process by which he developed the image. Indeed, we have evidence of the process and its result in Composition VIII (The Cow), a fully developed instruction that provides us with great insight into Van Doesburg’s train of thought and work, as well as his process of abstraction. (Figure 4.7)

Representation, then, shows us some broad vision of what we see in the original, be it a person, landscape, interior, event, or such, with some level of detail. To one degree or another, all art is abstract in that it is not the original form but instead the artist’s response to the original form rendered in artistic terms although, clearly, not all of it is so strongly abstracted that we lose the plainer references to the physical world.

Sometimes artists create an idealized version of a natural form rather than truly reflecting its actual appearance. This was the norm, for example, in depictions of royal figures in ancient Egypt. There was a canon, or set of principles and norms, for the representation of royals that was very specific about just how they must look, including norms for the proportions of the different parts of the body to one another, their stance, and other details. The canon also set standards for their garments, headgear, the false beard, the arm and fist positions, and other details. The canon was remarkably conservative and unchanging, altering very little over the many centuries that ancient Egypt existed.

The figures of the Pharaoh Menkaure (r. c. 2530-c. 2510 BCE) and his Queen Khamerernebty are shown as being well proportioned, physically fit, and in young adulthood. (Figure 4.8) Because the king was regularly assessed with regard to his favor with the gods and fitness to rule, he was required to be in top physical condition or so he must appear in any official imagery. This necessity resulted in the idealization of the natural physical form. So, while it is a representational image of the royal body, the need to depict him as a fit and worthy ruler meant that he was generally shown as being in the prime of life, with a trim and perfectly proportioned physique, and with no apparent hint of weakness or vulnerability. By contrast, the image of an Egyptian state official, Ka-Aper, who was not of royal rank, was created with a different idea. (Statue of Ka’aper: http://www.museumsyndicate.com/item.php?item=27334) As a commoner, he is shown with a very different physique rather pudgy and more relaxed, certainly not governed by the rules for the royal imagery. It is more naturalistic, not idealized like the royal works.

To study idealization further, we will explore the evolution of nude male sculptural forms in ancient Greece. We know Greek sculptors began with ideas they gleaned from the Egyptian forms they knew but then altered them in some very significant ways that reflected their own distinctive culture. They presented the forms in the nude (only sculptures of males were nude at first, female sculpture remained clothed until the fourth century BCE) and, over time, they increasingly sought to capture more accurate physical details and the principles of movement in the body, rather than the static sense of permanence the Egyptians had favored. 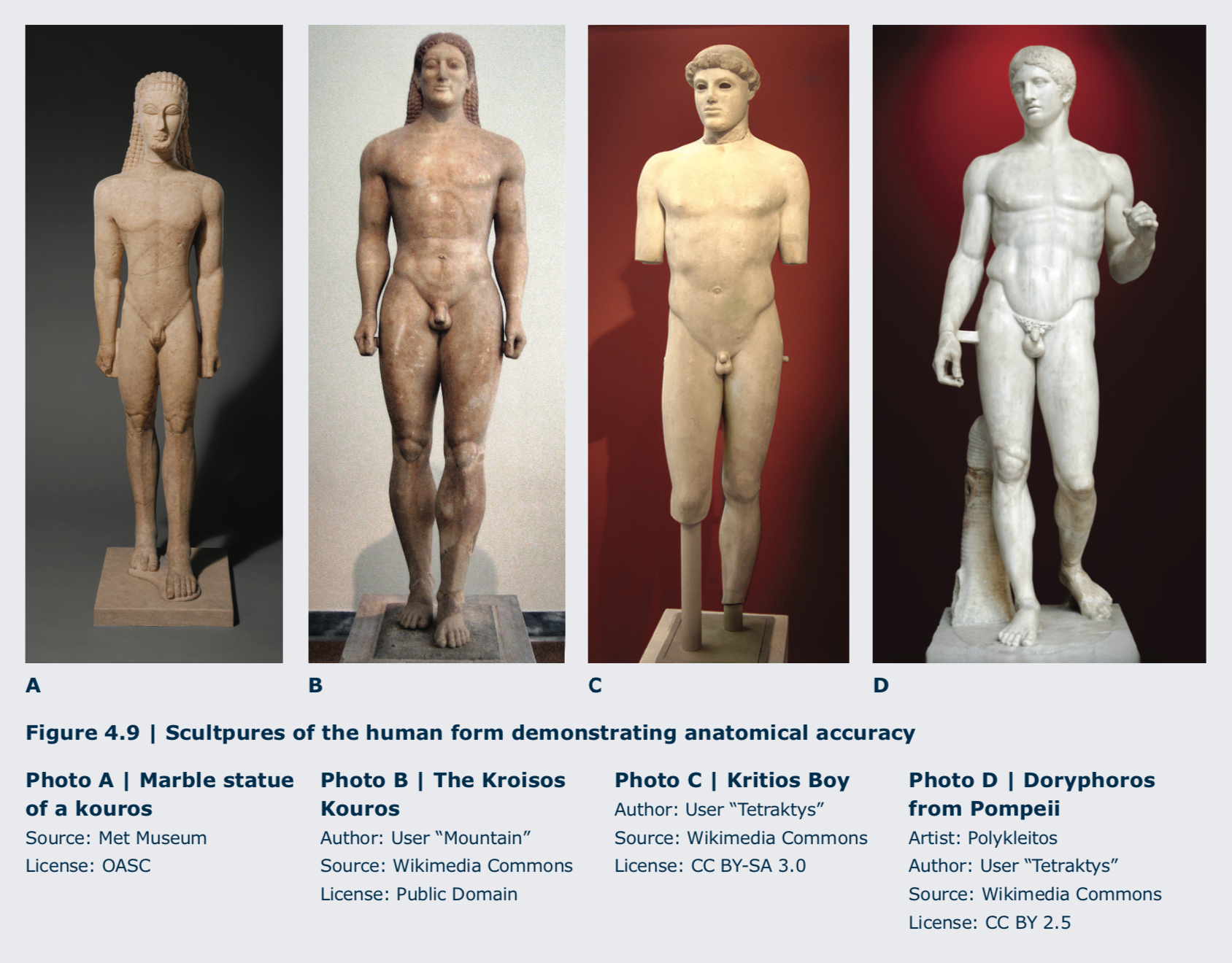 The turning point in this evolution—the moment when the achievement of naturalism was pronounced—was with the creation of the Kritios Boy, c. 480 BCE. (Figure 4.9c) At that point, the beginning of the Classical period in Greece, sculptors captured the potential for naturalistic movement and the contrapposto or weight shift of the knees and hips that occurs when standing with one leg at ease or walking. This soon gave way, however, to a canon of art for the refined form. So, again, true naturalism gave way to a notion of the “perfect” or idealized form. One further note is needed in consideration of the relationship of type to response to the phenomenal world. Recurrent strains of abstraction appear throughout the history of art, when artists elected to streamline, suppress, or de-emphasize reference to the phenomenal world. In the twentieth century, though, this approach took on different character in some instances, with a stated rejection of the art as related to the natural world and concerned instead with the art itself, to the processes by which it was made, and with the product as referring to these processes and artistic qualities rather than to some out- side phenomenon: the observed world.

Still, the art is never completely independent of some reference: the viewer might respond to the color, painterly effect, line quality, or some other aspect that is not necessarily associated with recognition of a particular physical object or “thing” but that relates to the qualities of the art in some way, that is, to some recognition of reference although this recognition may be ephemeral and may be nameless. The response might be quite visceral or intellectual, nonetheless. The development of this idea was perhaps an inevitable phase of the abstraction and explorations of the formal means that had been conducted by various movements that evolved in nineteenth and twentieth centuries.

Stories abound about the era in art and the push from abstraction to non-representation, with several artists claiming to have led the breakthrough. The first artist to use the term non- objective art, however, seems to have been Aleksandr Rodchenko (1890-1956, Russia), (Spatial Construction no. 12, Aleksandr Rodchenko: http://www.moma.org/interactives/exh...truct_jpg.html; Assembling for a Demonstration, Aleksandr Rodchenko: https://www.moma.org/collection/works/45090?locale=en) and its most active early theorist and writer was probably Vasily Kandinsky (1866-1944, Russia, lived Germany and France). (Figures 4.10, 4.11, and 4.12) 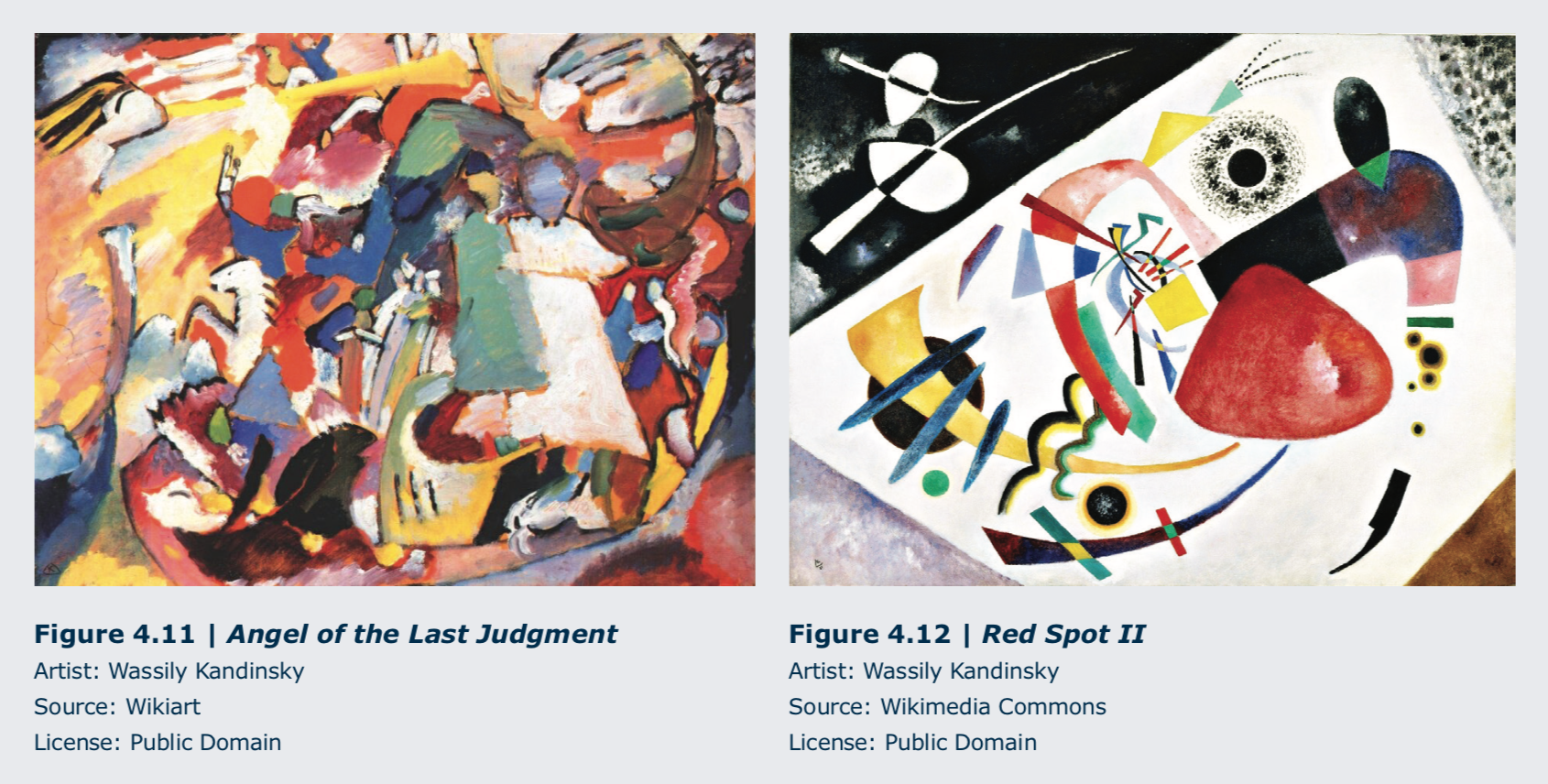 The artistic climate fostered widespread experimentation, and the synergistic atmosphere was a seedbed for new ideas and modes of working. Rodchenko sought to affirm the independence of artistic process and the “constructive” approach to creating artworks that were self-referential, and he explored the possibilities in painting, drawing, photography, sculpture and graphic arts. Kandinsky, also Russian but working in Germany, wrote an important treatise entitled Concern- ing the Spiritual in Art (1912) that was widely popular and soon translated from the original German into many languages. He explored color theory in relationship to music, logic, human emotion, and the spiritual underpinnings of the abstractions that for centuries had been viewed and absorbed through religious icons and popular folk prints in his native Russia.