While restricting our attention only to a description of the formal elements of an artwork may at first seem limited or even tedious, a careful and methodical examination of the physical components of an artwork is an important first step in “decoding” its meaning. It is useful, therefore, to begin at the beginning. There are four aspects of a formal analysis: description, analysis, interpretation, and evaluation. In addition to defining these terms, we will look at examples.

What can we notice at first glance about a work of art? Is it two-dimensional or three-dimen- sional? What is the medium? What kinds of actions were required in its production? How big is the work? What are the elements of design used within it?

Starting with line: is it soft or hard, jagged or straight, expressive or mechanical? How is line being used to describe space?

Considering shape: are the shapes large or small, hard-edged or soft? What is the relationship between shapes? Do they compete with one another for prominence? What shapes are in front? Which ones fade into the background?

Indicating mass and volume: if two-dimensional, what means if any are used to give the illu- sion that the presented forms have weight and occupy space? If three-dimensional, what space is occupied or filled by the work? What is the mass of the work?

Organizing space: does the artist use perspective? If so, what kind? If the work uses linear perspective, where are the horizon line and vanishing point(s) located?

On texture: how is texture being used? Is it actual or implied texture?

In terms of color: what kinds of colors are used? Is there a color scheme? Is the image overall light, medium, or dark?

Once the elements of the artwork have been identified, next come questions of how these ele- ments are related. How are the elements arranged? In other words, how have principles of design been employed?

What elements in the work were used to create unity and provide variety? How have the ele- ments been used to do so?

What is the scale of the work? Is it larger or smaller than what it represents (if it does depict someone or something)? Are the elements within the work in proportion to one another?

What is used within the artwork to create emphasis? Where are the areas of emphasis? How has movement been conveyed in the work, for example, through line or placement of figures?

Are there any elements within the work that create rhythm? Are any shapes or colors repeated?

Interpretation comes as much from the individual viewer as it does from the artwork. It de- rives from the intersection of what an object symbolizes to the artist and what it means to the viewer. It also often records how the meaning of objects has been changed by time and culture. Interpretation, then, is a process of unfolding. A work that may seem to mean one thing on first inspection may come to mean something more when studied further. Just as when re-reading a favorite book or re-watching a favorite movie, we often notice things not seen on the first viewing; interpretations of art objects can also reveal themselves slowly. Claims about meaning can be made but are better when they are backed up with supporting evidence. Interpretations can also change and some interpretations are better than others.

All this work of description, analysis, and interpretation, is done with one goal in mind: to make an evaluation about a work of art. Just as interpretations vary, so do evaluations. Your evaluation includes what you have discovered about the work during your examination as well as what you have learned, about the work, yourself, and others in the process. Your reaction to the artwork is an important component of your evaluation: what do you feel when you look at it? And, do you like the work? How and why do you find it visually pleasing, in some way disturbing, emotionally engaging?

Evaluating and judging contemporary works of art is more difficult than works that are hundreds or thousands of years old because the verdict of history has not yet been passed on them. Museums are full of paintings by contemporary artists who were considered the next Michelange- lo but who have since faded from the cultural forefront.

The best art of a culture and period is that work which exemplifies the thought of the age from which it derives. What we think about our own culture is probably not what will be thought of it a century from now. The art that we believe best embodies our time may or may not last. As time moves on, our evaluations and judgments of our own time may not prove to be the most accurate ones. We live in a world full of art, and it is almost impossible to avoid making evaluations—pos- sibly mistaken—about its value. Nonetheless, informed evaluations are still possible and useful even in the short term. 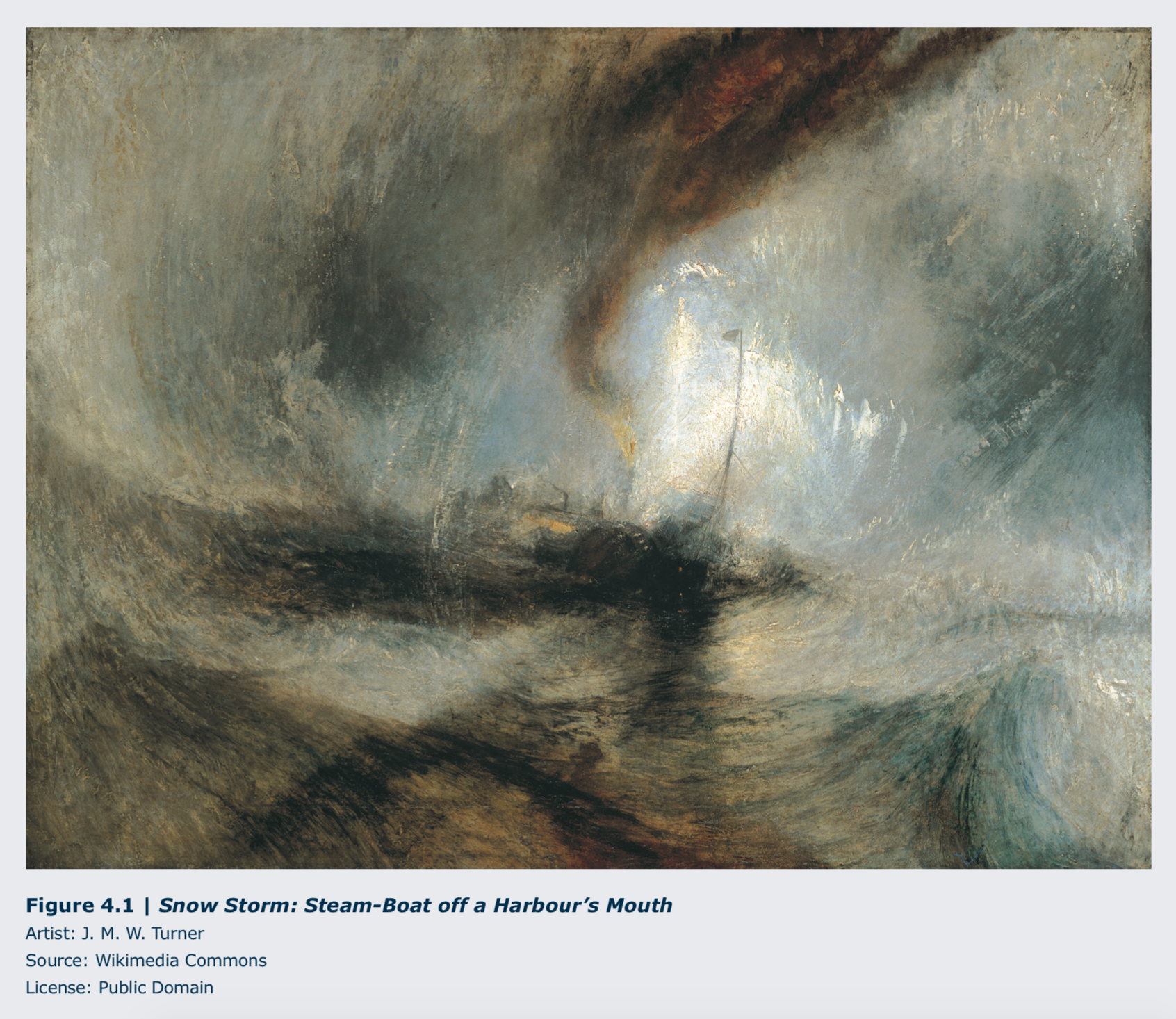 Snow Storm—Steam-Boat off a Harbour’s Mouth by Joseph Mallord William Turner (1775- 1851, England) is a chaotic, atmospheric oil on canvas painting. (Figure 4.1) First, on the level of description, the dark structure of the foundering steamboat is hinted at in the center of the work, while heavy smoke from the vessel, pitching waves, and swirling snow surround it. The brown and gray curving lines are created with long strokes of heavily applied paint that expand to the edges of the composition. Second, on the level of analysis, we note that the paint application, heavy, with long strokes, adds dramatic movement to the image. We see that the design principle of scale and proportion is being used in the small size of the steamboat in relation to the overall canvas. Now let us interpret these elements and their relation: The artist has emphasized the maelstrom of sea, snow, and wind. A glimpse of blue sky through the smoke and snow above the vessel is the only indication of space beyond this gripping scene of danger, and provides the only place for the viewer’s eyes to rest from the tumult. This scene is of humanity’s struggle for survival against powerful forces of nature. And finally, we are ready to evaluate this work. Is it powerfully effective in reminding us of the transitory nature of our own limited existence, a memento morii, perhaps? Or is it a wise caution of the limits of our human power to control our destiny? Does the work have sufficient power and value to be accepted by us as significant? The verdict of history tells us it is. J.M.W. Turner is considered a significant artist of his time, and this work is one that is thought to support that verdict. In the end, however, each of us can accept or reject this historical verdict for our own reasons. We may fear the sea. We may reject the use of technology as valiantly heroic. We may see the British colonial period as one of oppression and tyranny and this work as an illustration of the hubris of that time. Whatever we conclude, this work of art stands as a catalyst for this important dialogue.

Another example of formal analysis. Consider Lady at the Tea Table by Mary Cassatt Mary Cassatt (1844-1925, USA, lived France) is best known for her paintings, drawings, and prints of mothers and children. In those works, she focused on the bond between them as well as the strength and dignity of women within the predominantly domestic and maternal roles they played in the nineteenth century. Lady at the Tea Table is a depiction of a woman in a later period of her life, and captures the sense of calm power a matriarch held within the home. (Figure 4.2) First, a description of the elements being used in this work: The white of the wall behind the woman and the tablecloth be- fore her provide a strong contrast to the black of her clothing and the blue of the tea set. The gold frame of the artwork on the wall, the gold rings on her fingers, and the gold bands on the china link those three main elements of the painting. Analysis shows the organizing principle of variety is employed in the rectangles behind the woman’s head and the multiple circles and arcs of the individual pieces of the tea set. The composition is a stable triangle formed by the woman’s head and body, and extending to the pieces of china that span the foreground from one edge of the composition to the other. Let us interpret these observations. There is little evidence of movement in the work other than the suggestion that the woman’s hand, resting on the handle of the teapot, may soon move. Her gaze, directed away from the viewer and out of the picture frame, implies she is in the midst of pouring tea, but her stillness suggests she is lost in thought. How to evaluate this work? The artist expresses a restrained but powerful strength of character in her treatment of this subject. Is the lack of obvious movement in the work a comment on the emergence of women’s roles in society, a hope or a demand for change? Or is it a monument to the quiet dignity of the domestic life of Victorian era Paris? The gold of the frame, the rings, and the china dishes appear to unify three disparate objects into one statement of value. Do they symbolize art, fidelity, and service? Is this a comment on the restrictions of French domestic society, or a claim to its strength? One indication of the quality of a work of art is its power to evoke multiple interpretations. This open and poetic richness is one reason why the work of Mary Cassatt is considered to be important. The above examples are only one of many ways in which we can interpret and evalu- ate works of art. We will examine a few more approaches to analysis and critique. The point of this exercise is to equip the interested student with tools to become more fully aware of the dynamics and content of works of art, not only in museums and textbooks, but in the world of images that continually surrounds us today.