A Sanskrit title for “Prince of Princes” or “King of Kings,” several degrees higher than the title Maharaja, which means “Great King.”

A Vedic ritual horse sacrifice; Samudragupta commemorated his territorial conquests with one of these rituals.

The Gupta Empire, founded by Maharaja Sri Gupta, was an ancient Indian realm that covered much of the Indian Subcontinent from approximately 320-550 CE. Gupta rule, while solidified by territorial expansion through war, began a period of peace and prosperity marked by advancements in science, technology, engineering, art, dialectics, literature, logic, mathematics, astronomy, religion, and philosophy.

The Gupta Empire was believed to be a dynasty of the Vaishya caste, the third of the four Hindu castes representing merchants and farmers. Founded by Sri Gupta c. 240-280 CE, there are contradictory theories regarding the original homeland of the Guptas. Historians believe Sri Gupta and his son may have been Kushan vassals, or rulers who swore allegiance to the Kushan Empire. Sri Gupta’s son and successor, Ghatotkacha, ruled from c. 280-319 CE, while his son, Chandragupta, ascended the throne around 319 and ruled until 335 CE.

Chandragupta married princess Kumaradevi from the Kingdom of Magadha, which was one of the Mahajanapadas (or great countries) of ancient India during the 4th century CE. With a dowry and political alliance from the marriage, Chandragupta conquered or assimilated the kingdoms of Magadha, Prayaga, and Saketa. By 321 CE, he established a realm stretching along the Ganges River to Prayag, the modern-day city of Allahabad, in the Indian state of Uttar Pradesh. Hindus believe the god Brahma offered his first sacrifice after creating the world at Prayag.

Samudragupta succeeded his father, Chandragupta I, in 335 CE, and ruled for about 45 years. He conquered the kingdoms of Ahichchhatra and Padmavati early in his reign, then attacked neighboring tribes, including the Malwas, Yaudheyas, Arjunayanas, Maduras, and Abhiras. By his death in 380 CE, Samudragupta had incorporated over 20 kingdoms into his realm, and extended the Gupta Empire from the Himalayas to the Narmada River in central India, and from the Brahmaputra River that cuts through four modern Asian nations to the Yamuna— the longest tributary of the Ganges River in northern India.

To celebrate his conquest, Samudragupta performed the royal Vedic ritual of Ashwamedha, or horse sacrifice. Special coins were minted to commemorate the Ashvamedha, and the king took the title of Maharajadhiraja (or “King of Kings”) even higher than the traditional ruler’s title of Maharaja.

According to the Gupta records, Samudragupta nominated his son, Prince Chandragupta II, born of Queen Dattadevi, as his successor. However, his eldest son, Ramagupta, may have been his immediate successor until he was dethroned by Chandragupta II in 380 CE. 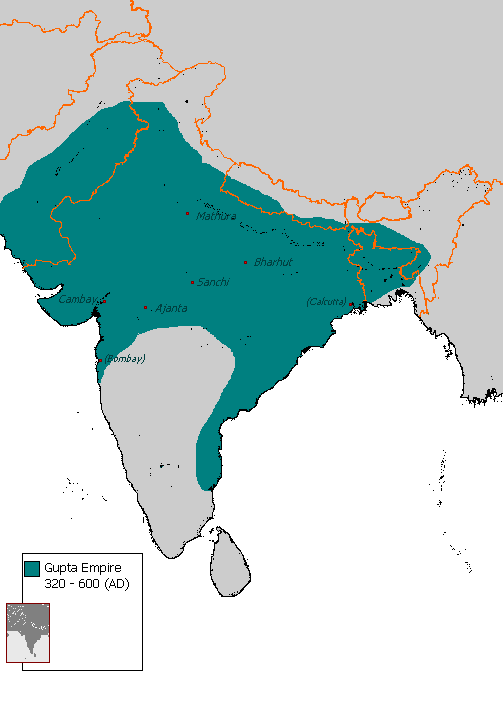 Gupta Empire, 320-600 CE. The Gupta Empire expanded through conquest and political alliances until 395 CE, when it extended across the entire Indian subcontinent.

After gaining power, Chandragupta II expanded the Gupta Empire through conquest and political marriages until the end of his reign in 413 CE. By 395 CE, his control over India extended coast to-coast. At the high point of his rule, Chandragupta II established a second capital at Ujjain, the largest city in the modern state of Madhya Pradesh in central India. Ujjain, on the eastern bank of the Kshipra River, remained an important political, commercial, and cultural hub through the early 19th century.

Vikramaditya is the name of an emperor of ancient Indian legend, characterized as the ideal king known for generosity, courage, and as a patron of scholars. A number of historians believe that some of these legends are based on Chandragupta II, who is thought to have adopted the title of Vikramaditya.

In the legends, Vikramaditya is said to have thwarted an invasion by the Saka, a group of eastern Iranian nomadic tribes, also known as Scythians, and gained the title of Sakari, or Enemy of the Saka. Chandragupta II conquered the western Indian region of Malwa after defeating the Western Kshatrapas, a branch of the Sakas, as well as expelling the Kushana Empire from the northern Indian city state Mathura. These victories were likely transposed onto the legendary character of Vikramaditya.

Chandragupta II issued gold coin types introduced by his father, Samudragupta, but also introduced several new types of coins, differentiated by the designs on the face of each coin line, such as the Archer or the Tiger-Slayer. He was also the first Gupta king to issue silver coins.

One of the most curious structures in Delhi, India (an iron pillar dating back to the 4th century CE) bears an inscription stating that it was erected as a flagstaff in honor of the Hindu god Vishnu, and in memory of Chandragupta II. The pillar, made of 98% wrought iron, is considered a highlight of ancient Indian achievements in metallurgy; it has stood more than 1,600 years without rusting or decomposing.

Despite the expansion of the Gupta Empire through war, there were numerous examples of cultural sophistication during the Gupta era, with architecture, sculptures and paintings surviving as reminders of the creativity of the time. Under Gupta rule, a number of notable scholars thrived, including Kalidasa, considered the greatest poet and dramatist of the Sanskrit language; Aryabhata, the first of the Indian mathematician-astronomers who worked on the approximation for Pi; Vishnu Sharma, thought to be the author of the Panchatantra fables, one of the most widely-translated, non-religious books in history; and the Hindu philosopher Vatsyayana, author of the Kama Sutra.

The period of Gupta rule, especially the reign of Chandragupta II, is still remembered as the Golden Age of India.